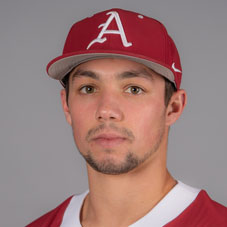 Played in all 69 games, starting 67 in centerfield … Hit .288 with 77 hits, 10 home runs and 49 RBIs … His 10 long balls made him the first Razorback to hit 10 or more home runs in his first two seasons since Rodney Nye hit 15 and 20 home runs, respectively, in 1998 and 1999 … Produced a .468 slugging percentage and a .338 on-base percentage … Only made four errors in the outfield for a .976 fielding percentage, but had four outfield assists, tying for the most among all Razorback outfielders … Finished the year with 23 multi-hit games and 11 multi-RBI games, both higher totals than his freshman year … He had four games with four or more RBIs (5 vs. Bucknell – Feb. 17; 4 vs. Alabama – April 29; 5 vs. South Carolina – May 23; 4 vs. Texas Tech – June 20), more than any player on the team … Hit .325 in SEC play, hitting half of his home runs (5) and driving in 15 RBIs … Also had eight doubles in league play after having none during his freshman season … Hit .286 through the NCAA Tournament, but hit .346 at the College World Series, the second-highest average on the team during the six-game series … Had nine hits, two home runs and eight RBIs in Omaha … Tied for the third-most RBIs among the College World Series field and tied for the second-most home runs, while totaling the third most bases (17) … Was one of only two players in the CWS to record a four-hit game after going 4-for-4 with four RBIs against Texas Tech in the quarterfinals and it was also a career high … His four-hit and four-RBI game was the first by a player in the CWS at TD Ameritrade Park and the first by a player since 2008 … It was also the first four-hit performance by a Razorback in the College World Series since Jeff King in 1985 … Went 8-for-14 (.571) at the plate in the first three College World Series games, including two or more hits in each game … Notched a career-high five RBIs after going 2-for-4 at the plate with one home run and one double against Bucknell (Feb. 17) … Tied that personal best later in the season after notching five RBIs against South Carolina (May 23), three coming off a home run … Fell a triple short of the cycle after going 3-for-5 against LSU (May 5) with two RBIs and a run scored … Started the season with just eight hits in his first 43 at-bats before hitting the pinch-hit walk-off single against USC (March 4) to help the Razorback take the series from the Trojans.

Started 56 games in centerfield … Hit .291 with 64 hits, 12 home runs, and 37 RBIs … His 12 long balls were the second most by a Razorback freshman in a season in school history and the most among all freshmen in the conference in 2017 … Hit a home run in his first game against Miami (Ohio) (Feb. 17), the first Arkansas freshman to homer in his Razorback debut since Andy Wilkins in 2008 … Produced a .495 slugging percentage and a .356 on-base percentage … Struck out just 36 times, the third-lowest among all Arkansas players with 200 or more at-bats … Was consistent through conference play, hitting .284 in 28 games … Hit five of his 12 home runs against SEC teams … Made just three errors in the outfield for a .978 fielding percentage and notched three outfield assists … Totaled 18 multi-hit games, six with three hits or more … Also had seven games with two or more RBIs, including two four-RBI games (vs. Memphis – April 18; vs. Florida – May 27) … Against Memphis, he nearly hit for the cycle, going 3-for-5 at the plate, missing only the home run … His four RBIs and three runs scored in the game were both season highs … Matched that performance in the SEC Tournament against the top-seed Florida Gators, going 3-for-4 with four RBIs, one home run, one walk, and three runs scored … Finished the tournament hitting .350 with six RBIs and four extra-base hits … Went on to hit .227 in the NCAA Fayetteville Regional, notching at least one hit in four out of five games … Went 2-for-5 in the first elimination game against Oral Roberts (June 4), with one double … Had a season-long eight-game hitting streak running from Arkansas’ second game of the SEC Tournament (vs. Auburn – May 25) through the first game of the regional final (vs. Missouri State – June 4) … During the streak, he went 12-for-35 (.343) with three multi-hit games, two home runs, and seven RBIs … Helped secure a crucial series split at Tennessee (May 6) by hitting a solo home run in the second game of a doubleheader for a 2-0 victory … Went 5-for-7 (.714) in the rain-shortened series with two home runs against the Volunteers … Over the final eight games of the regular season, he had 14 hits with six RBIs, and four home runs, helping Arkansas earn a four-seed in the SEC Tournament.

Cypress High School
Ranked as the No. 10 outfielder and the No. 82 overall prospect in the nation by Perfect Game … Ranked as the No. 4 outfielder and No. 10 overall prospect in the state of California … Ranked as the No. 209 overall MLB Draft prospect in the Baseball America Top 500 … 2016 Rawlings-Perfect Game second-team All-American and California first team All-Region … Considered to have the second-best high school arm and be the fourth-best high school defender by Perfect Game … 2015 Perfect Game Underclassman first team All-American … Participated in the 2015 Perfect Game National Showcase … Named to the 2015 17U Perfect Game World Series All-Tournament Team … Named to the 2015 all-CIF Division I team … Hit .385 at 2015 WWBA World Championship and earned all-tournament recognition … Participated in the 2015 Area Code Baseball Games as part of the Milwaukee Brewers team representing Southern California … Attended the 2014 Perfect Game Underclass All-American Games … 2014 Perfect Game Underclassman High All-American honorable mention … Orange County baseball player of the year in 2016 and first-team All-Orange County in 2015 … Named to the California Southern Section All-Division I team … Batted .365 with 29 runs scored and 27 RBI in 2016 … Helped lead Cypress to a 25-8 record and advanced to the state quarterfinals … As a freshman, was part of a Cypress team that finished 26-8 and won the CIF Southern Section Division I State Championship … Played summer and fall ball for the CBA Marucci 2016 … Played for head coach John Weber at Cypress High School.

Personal
Son of Tim and Fernanda Fletcher … Has one brother, David and one sister, Dariana … Majoring in sport management.