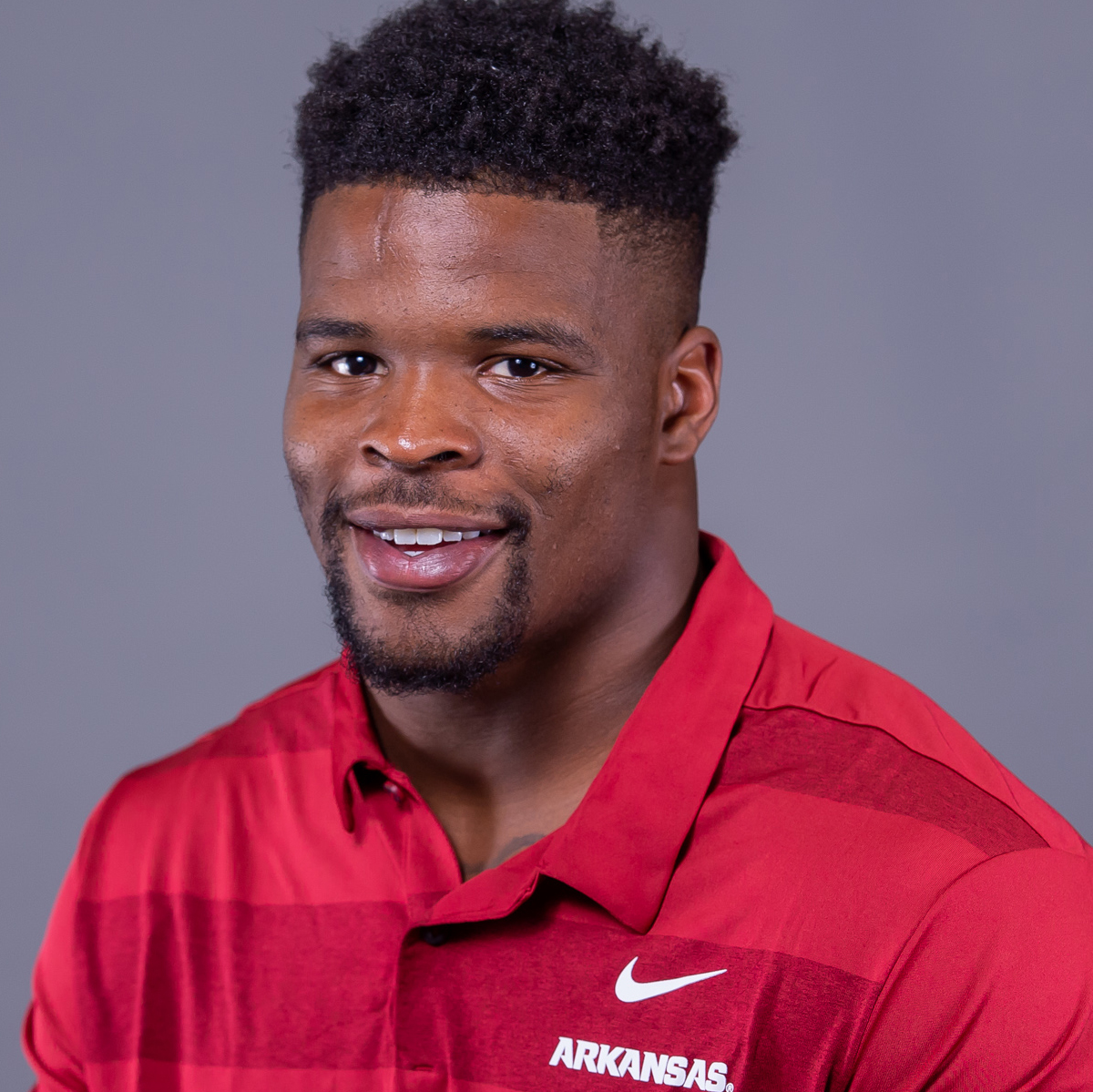 2018 (SENIOR): Played in nine of 12 games in his final year with the Razorbacks, starting eight at the weakside linebacker position … Elected Team Captain by his teammates after week four of the season … Appeared in 469 snaps in 2018, with 259 coming in run defense plays, according to Pro Football Focus … Ranked third on the team in tackles, racking up 80, 38 solo, with 6.5 for loss totaling 10 yards, including two sacks for six yards … Picked off two passes, both against Texas A&M on Sept. 29 in Arlington, forced a fumble and recovered another, while also getting credit for one quarterback hurry … Posted double-digit tackle totals four times, kicking off the season with 10 against Eastern Illinois on Sept. 1 … Earned a season-best 80.5 overall defensive grade from PFF with the performance, with an 81.3 tackling grade and an 80.9 mark in run defense … Tallied eight stops at Auburn (Sept. 22) to open SEC play after missing the previous two games … Notched back-to-back games with 13 tackles, doing so against the Aggies and Alabama (Oct. 6) … Put together his final double-digit tackle performance of the year with 12 in his last game at DWRRS with 12, while also recovering a fumble and returning it 24 yards to set up Arkansas’ first score of the game against the Tigers … Recorded four games with tackling grades over 80.0, also doing so against Alabama (85.3), Tulsa (82.2) and at Mississippi State (83.2) … Wrapped his collegiate career with 320 total tackles, the most among all SEC defenders playing college football in 2018 … The total put him 10 away from the 10th-most tackles in an Arkansas career … Was part of a trio of Razorbacks (De’Jon Harris & Santos Ramirez) that led the conference the majority of the season in total tackles, topping off at 285 last year.

2017 (JUNIOR): Started all 12 games at WLB … Racked up more than 100 tackles (103) for the first time in his career to finish second on the team for the second time in three seasons … Notched 1.5 tackles were for loss, including one sack … Added two pass breakups and two quarterback hurries … Ranked fourth in the SEC in double-digit tackle games (6) … Four of those 10-plus tackle performances came during SEC action … Led the team in tackles five times … Tied for fourth in the SEC in tackles during conference play (72) … Tallied 89 tackles against Power 5 opponents … vs. No. 23 TCU (Sept. 9): Led the team with a career-high 17 tackles, the most by a Razorback since 2010, when Jerry Franklin recorded 20 stops at Mississippi State in a 38-31 double-overtime victory … vs. Texas A&M (Sept. 23): Followed up with his second straight double-digit tackle effort (14) to lead the team and combine for 31 tackles across back-to-back games, the most by a Razorback over a two-game span since Tony Bua had a combined 34 against Kentucky and South Carolina in 2003 … vs. No. 21 Auburn (Oct. 21): Recorded a team-best 13 tackles, including nine of the solo variety … vs. Coastal Carolina (Nov. 4): Posted 11 tackles … vs. Mississippi State (Nov. 18): Booked 11 tackles for his fifth double-digit tackle performance of the season … vs. Missouri (Nov. 24): Finished the year with his sixth 10-plus tackle effort (11), including 1.0 for loss.

2016 (SOPHOMORE): Started all seven games played … Finished with 42 tackles, including 22 solo stops … Tallied 1.5 tackles for loss … Recorded one interception … Broke up one pass … Recovered two fumbles … Had one quarterback hurry … Left the Alabama game with a foot injury … Missed the final six regular-season contests … Returned from injury and started at Will linebacker in the Belk Bowl against Virginia Tech … Racked up 32 tackles through his first four games … vs. Louisiana Tech (Sept. 3): Tied for the team lead with seven tackles … Made his first career interception on the opening play of Louisiana Tech’s second drive of the second quarter … at No. 15 TCU (Sept. 10): Followed up with eight tackles, including four solo stops … Combined for 21 tackles with Brooks Ellis … All eight tackles came in the second half and overtimes, including five in the third quarter … Recovered a fumble at the Arkansas 4-yard line that was forced by Jeremiah Ledbetter during the Horned Frogs’ first drive of the game … Recovered TCU’s blocked game-winning field goal attempt at the Arkansas 11 … vs. Texas State (Sept. 17): Finished second on the team with six tackles … Four tackles came in the first quarter … vs. No. 10 Texas A&M (Sept. 24): Posted his fifth career double-digit tackle effort with a team-high 11, including 1.5 for loss … Marked the seventh time he’s led the team in tackles during his career … Seven tackles were of the solo variety … Recovered a fumble at the Arkansas 2-yard line on the opening drive of the second half … vs. No. 22 Virginia Tech (Dec. 29): Made six tackles in his first game back from injury.

2015 (FRESHMAN): Played in all 13 games and started 11 contests … Only player to win SEC Freshman of the Week twice … Finished fifth nationally among FBS freshmen and tops among SEC rookies with 95 tackles … Ranked 17th in the SEC in total tackles … Led Arkansas in tackles five times … Had a team-high 46 solo tackles … Also added 3.5 tackles for loss, one sack and two forced fumbles … Made a team-high 69 tackles in SEC action … Averaged 9.8 tackles in SEC road games … Put together four double-digit tackle performances … Combined for 150 tackles with Brooks Ellis over the last nine games … The duo of Greenlaw and Ellis finished as one of six pairs of teammates to rank in the SEC’s top 20 in total tackles … vs. Texas Tech (Sept. 19): Made his first career start and made nine tackles, including six solo … at Tennessee (Oct. 3): Produced a team-best 10 tackles with eight coming in the first half … Started a string of six straight games with at least eight tackles … at No. 8 Alabama (Oct. 10): Six of his eight tackles were of the solo stops … vs. Auburn (Oct. 24): Made 12 tackles in the second half and overtime periods combined en route to a season-high 16 stops, which was the most by a Razorback in 2015 … Named SEC Freshman of the Week for the first time … vs. UT Martin (Oct. 31): Became the only Razorback in 2015 to post back-to-back games with double figure tackles with 10 stops … at No. 9 LSU (Nov. 14): Produced his fourth double figure tackle performance over a six-game span with a team-best 12 tackles to lead an Arkansas defense that held LSU 218 yards below its season average … Recorded first career sack in the second quarter and forced a fumble on the play which eventually resulted in a 21-0 Arkansas lead … Picked up his second SEC Freshman of the Week honor after Arkansas’ win in Baton Rouge retained The Golden Boot.

HIGH SCHOOL: A consensus three-star recruit by Rivals, ESPN, Scout and 247Sports … Listed as the No. 35 safety in the country and sixth-best player in Arkansas by Rivals … Also listed as the sixth-best player in the Natural 21 by HawgSports.com … 247Sports ranked him as the No. 12 player in Arkansas and No. 56 safety nationally … Top safety in the state of Arkansas according to Scout … Earned a three-star ranking by 247Composite, a combined index of national recruiting rankings … Was named the All-NWA Media Football Player of the Year as a senior … Named to the Associated Press Arkansas Super Team at defensive back in 2014 … Earned All-ArkansasVarsity.com first team honors at defensive back … Tabbed all-state and all-conference honors … Totaled 119 tackles, including 4.0 for loss, four interceptions, 10 pass breakups and two fumble recoveries as a senior, helping Fayetteville High School reach the Arkansas Class 7A state championship game … Also caught 11 passes for 240 yards (21.8 avg.) and three touchdowns on offense … Posted another 100-tackle season as a junior, tallying 108 stops, including 4.0 for loss, three interceptions, four pass breakups, one forced fumble and a fumble recovery in 2013 … Started as a sophomore and helped Fayetteville win the class 7A state championship … Coached by Daryl Patton … Also participated in track and field … Chose Arkansas over offers from Georgia, Washington State and others.

PERSONAL: Born on May 25, 1997 … Son of Brian and Nanci Early … Recreation and sport management major.