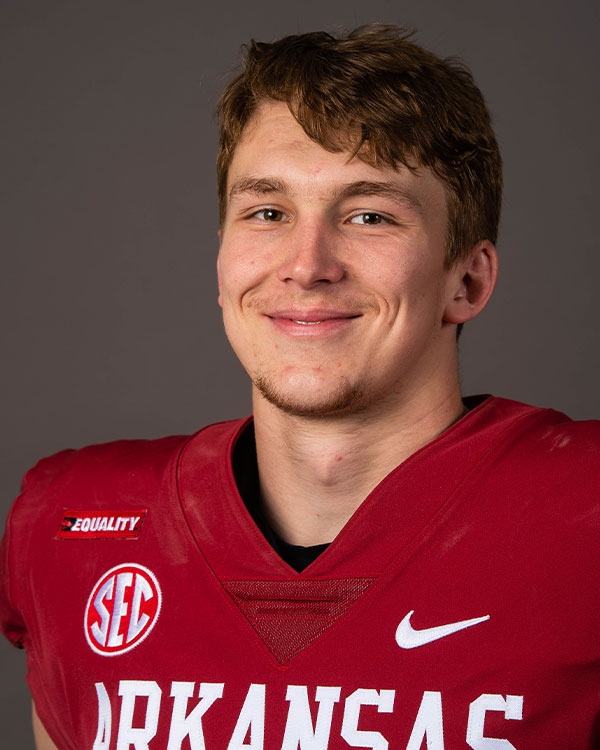 At Alabama
2021 (SOPHOMORE): Played in 12 games with three starts … Totaled 24 tackles, including 2.5 for loss and one sack, to go along with four quarterback hurries and a pair of pass breakups … Totaled a career-high six tackles at Miami (Sept. 4) … Made his first career start in the crimson and white against Mercer (Sept. 11) and broke up a pair of passes while adding two tackles … Recorded seven tackles, including one for loss and added a quarterback hurry, at Florida (Sept. 18) … Finished with five tackles and two quarterback hurries against Ole Miss (Oct. 2) … Finished with two tackles, including a sack, against New Mexico State (Nov. 13) … Recorded two stops, including half a tackle for loss, against Georgia (Dec. 4) in the SEC Championship … Picked up player of the week honors on special teams from the coaches for his impact on the Tide’s coverage units against Cincinnati (Dec. 31) in the Cotton Bowl … Contributed on special teams against Georgia (Jan. 10) in the National Championship.

2020 (FRESHMAN): Developed a role in the Tide’s young outside linebacker rotation while seeing consistent minutes on special teams … named a special teams player of the week by the Alabama coaching staff for his play at Tennessee and Arkansas. Missouri: Saw his first collegiate action, recording one unassisted tackle in the debut. Texas A&M: Earned playing time against the Aggies. Ole Miss: Totaled two tackles on defense in his expanded minutes. Georgia: Saw time against the Bulldogs. Tennessee: Helped limit the Vols to 33 total yards on kickoff returns … made one tackle on kickoff coverage after a six-yard return to put UT deep in its own territory … earned special teams player of the week accolades from the UA coaches for his play against the Volunteers. Mississippi State: Made one tackle on kickoff coverage … also saw time on defense. Kentucky: Recorded one quarterback pressure off the edge. Auburn: Finished with one tackle on kickoff coverage to stop the AU returner after a gain of only 19 yards. LSU: Paired with DeMarcco Hellams for two tackles on kickoff coverage. Arkansas: Helped the Alabama special teams unit limit any big returns by the Razorbacks … selected as a special teams player of the week by the UA coaching staff for his efforts in Fayetteville. Florida: Saw time on defense and special teams in the SEC Championship Game. Notre Dame: Worked on special teams against the Fighting Irish. Ohio State: Saw time in the CFP National Championship Game.

High School: One of the nation’s top all-around athletes and a prototypical linebacker or tight end… choose to focus on the defensive side of the football at Alabama… a composite five-star recruit by 247Sports… rated as the No. 1 player in Texas by 247, the top-ranked athlete nationally and the No. 13 player nationally in the final Top247… No. 22 nationally in the 247Composite and the composite’s No. 1 athlete and No. 3 player in Texas… a four-star prospect by ESPN who is No. 36 in the ESPN 300 and the outlet’s No. 4 athlete… rated as the No. 5 player in the Midlands Region by ESPN… Rivals.com rates him as the No. 5 outside linebacker, the No. 37 player nationally and the No. 5 prep prospect in Texas… a five-star player by PrepStar… selected to the magazine’s Top 150 Dream Team and was rated as the No. 5 outside linebacker and the 37th-ranked player in the nation… selected to the Under Armour All-America Game… named the 2018 SportsDayHS Utility Player of the Year after completing 8-of-9 passes for four touchdowns, rushing for 280 yards and 13 touchdowns while making 119 tackles on defense, including 10 for loss and eight sacks, to go with three interceptions, two of which were returned for touchdowns… threw five more touchdown passes in 2019 on just eight attempts while rushing for 326 yards and 10 scores… also caught 34 passes as a senior for 717 yards and 12 scores… finished with 48 rushing/receiving touchdowns in his career while throwing for 10 scores… finalist for the 2019 Landry Player of the Year, which goes to the top high school football player in North Texas… played for head coach Dave Henigan at Ryan High School in Denton, Texas… chose Alabama over Oklahoma while also considering LSU, Georgia, Notre Dame, Oregon and Penn State.