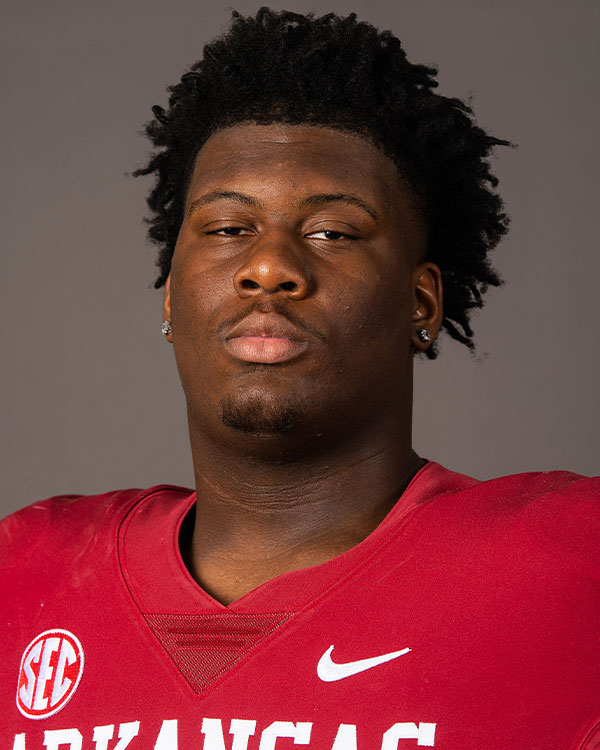 HIGH SCHOOL: Enrolled early and participated in spring practices … Consensus four-star prospect by 247Sports, Rivals and ESPN … Rated the No. 3 player in Arkansas and No. 29 offensive tackle in the country by Rivals … Played both offensive and defensive line for head coach Todd Eskola at Joe T. Robinson High School … Helped Joe T. Robinson to a state championship with a 14-1 record as a senior … Graded at 86% as an offensive lineman, while adding 61 tackles, 28.0 tackles for loss and two forced fumbles on the defense line … As a junior played on a team that went 8-4 and qualified for the state playoffs … Appeared in nine games and recorded 36 total tackles with 15.0 tackles for loss and 4.0 sacks … His sophomore season, he helped the team to a 14-1 record and a state title … Registered 44 tackles with 14.0 tackles and 3.0 tackles for loss … Started at right tackle as a freshman on a team that finished 12-3 and qualified for the state title game … CHOSE ARKANSAS OVER: Georgia, Oklahoma, Miami, Tennessee, Texas A&M and others.

PERSONAL: Son of Elliott (former Arkansas defensive lineman from 2001-04) and Tiffany Harris … has a brother, Elliott Jr., and a sister, Talia … Born September 8, 2004.