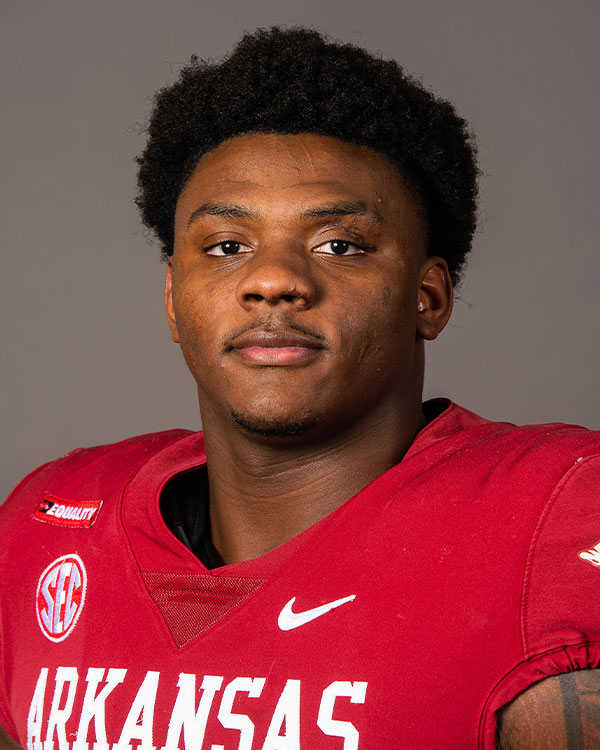 2021 (REDSHIRT SOPHOMORE): Played in all 13 games with three starts … Recorded 27 tackles with 4.0 tackles for loss … Posted one sack and three QB hurries … Carded one pass breakup on the year … Notched three assisted tackles, including 0.5 tackles for loss, in season opener against Rice (Sept. 4) … Made two tackles against Texas (Sept. 11) … Charted a solo stop against Georgia Southern (Sept. 18) … Turned in a three-tackle effort at Georgia (Oct. 2) … Totaled three tackles for the second straight week at Ole Miss (Oct. 9) … Made first start of the season against Auburn (Oct. 16), carding three total tackles for the third consecutive week along with a pass breakup … Finished with two assisted stops in the win over UAPB (Oct. 23) … Registered one tackle against Mississippi State (Nov. 6) … Made second start of the season at LSU (Nov. 13) and recorded a season-high four total tackles … Accounted for two tackles for loss at Alabama (Nov. 20) … Accumulated three tackles, including 1.5 tackles for loss, against Penn State (Jan. 1) in Outback Bowl win.

2020 (REDSHIRT FRESHMAN): Played in nine games and made seven starts at defensive end … Totaled 27 tackles and 3.0 tackles for loss … Led the team with 2.5 sacks and also had one quarterback hurry and one interception … Made three tackles with his first career quarterback hurry in the season opener against Georgia (Sept. 26) … Recorded three tackles for the second straight week and tallied first sack of the year in his first career start in the win at Mississippi State (Oct. 3) … Tallied a career-high six tackles with half-a-sack, recording a stop behind the line for the second week in a row, at Auburn (Oct. 10) … Registered one tackle against Ole Miss (Oct. 17) and did not record any statistics at Texas A&M (Oct. 31) … Totaled five tackles and 0.5 tackles for loss in the win over Tennessee (Nov. 7) and recorded his first career interception, picking off QB Harrison Bailey in the fourth quarter … First interception by an Arkansas defensive lineman since JaMichael Winston in 2013 against Louisiana … Logged four stops at Florida (Nov. 14) and sacked QB Kyle Trask for a 10-yard loss in the third quarter … Did not play against LSU (Nov. 21) … Started the final two games of the year, logging two tackles at Missouri (Dec. 5) and three against Alabama (Dec. 12) … According to Pro Football Focus, saw action in 396 defensive and 42 special teams plays … Posted highest defensive game grade of 70.8 against Tennessee … Totaled five games with tackle grades of 70-plus, with a season-high of 77.1 against Tennessee.

HIGH SCHOOL: Four-star prospect by Rivals and ESPN … Rated as the No. 32 strongside defensive end in the country and 38th overall player in the state of Florida by Rivals … Three-year varsity letterwinner, playing his final high school season at IMG Academy in Bradenton, Florida … Totaled 17 tackles, 10 solo, along with 3.5 tackles for loss, including 1.5 sacks as a senior … Helped IMG Academy to a 7-1 record in 2018 … Racked up 56 tackles, 16 for loss, with 12 sacks as a junior at Memphis Central High School in 2017 … CHOSE ARKANSAS OVER: Auburn, LSU, Mississippi State, Ole Miss, South Carolina, Tennessee, Memphis and others.