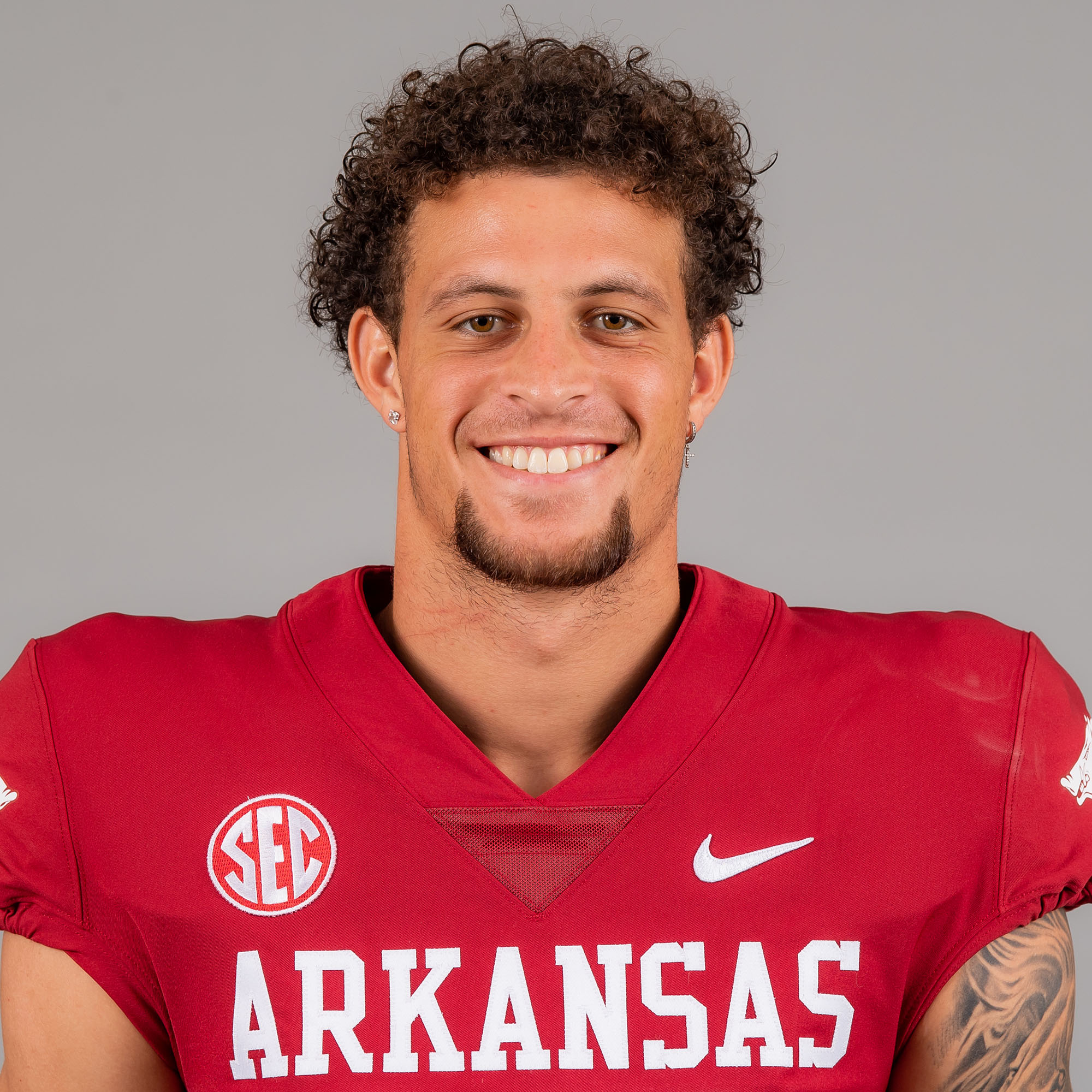 2020 (REDSHIRT SENIOR): Broke the single-season school record for completion percentage, completing 68.5% of his passes to top Kevin Scanlon’s mark that had stood since 1979 … Passed for 2,017 yards and 17 touchdowns – the most by an Arkansas QB since Austin Allen in 2016 … Johnny Unitas Golden Arm Award Watch List and Reese’s Senior Bowl Top 250 honoree … Threw for 200 yards, completing 19-of-36 passes for a touchdown – a 49-yard touchdown toss to WR Treylon Burks for his first Arkansas touchdown – in his first start for the Razorbacks against No. 4 Georgia (Sept. 26) … Went 20-for-28 passing for 212 yards and two scores in the win at No. 16 Mississippi State (Oct. 3) … Eclipsed 300+ passing yards for the first time in his career, completing 22-of-30 attempts for four touchdowns at No. 13 Auburn (Oct. 10) … His four touchdown tosses against the Tigers were the most by any Razorback since 2015, and tied for eighth-most in a single-game in program history …Completed 21-of-34 passes for 244 yards and a touchdown in the win over Ole Miss (Oct. 17) … Completed 20+ passes for the fourth straight game, completing 23-of-31 passes for 239 yards and three touchdowns while rushing for a career-high 91 yards at No. 8 Texas A&M (Oct. 31), the first 90+ yard rushing performance by an Arkansas QB since 2004 … In his return to No. 6 Florida, completed 15-of-19 passes for 250 yards and two touchdowns … Threw for a career-high 339 yards against LSU (Nov. 21), on 17-of-26 passing … Also rushed for 43 yards (3.1 ypc) against the Tigers, scoring his first rushing touchdown of the year on a 10-yard run in the second quarter … First Arkansas quarterback since at least 2000 to throw for at least 200 yards in each of the season’s first eight games … Threw for two or more touchdowns in three straight games (Texas A&M, Tennessee, Florida), become the first Razorback signal caller to do so since Brandon Allen in 2014-15.

AT FLORIDA:
2019 (REDSHIRT JUNIOR): Appeared in three games as a redshirt-junior in 2019, seeing action against Miami (Aug. 24), UT Martin (Sept. 7) and Kentucky (Sept. 14), starting all three … Threw for 698 yards and five touchdowns, rushing for 68 yards and a score over the three games … Went 17-for-27 in the season opener against Miami, throwing for 254 yards and two TDs, also ran for a score on eight yards … Put together a strong showing against Tennessee-Martin, racking up 270 yards and two touchdowns through the air on 25-of-27 passing, while also running for 37 yards … Also played in the SEC opener at Kentucky, going 12-for-17 for 174 yards and a TD, with 23 rushing yards.

2018 (REDSHIRT SOPHOMORE): Played in and started all 13 games at quarterback, throwing for 2,457 yards with 24 touchdowns and six interceptions on the season… Totaled 350 rushing yards on 110 carries and a team-high tying seven rushing touchdowns… Led the Gators to a 10-3 record and No. 6 final ranking in the USA Today Coaches’ Poll… Became the first Gators quarterback since John Brantley in 2010 to start every game throughout the entire season… Finished the season with 31 touchdowns accounted for, tied with Chris Leak’s 2004 season for the seventh-highest single-season total in school history… His seven rushing touchdowns left him one shy of tying Tim Tebow (2006) and Jimmy Fisher (1979) for the sixth-most rushing touchdowns by a Gators quarterback in a single season… Ranked tied for 32nd nationally with 24 touchdown passes, which was also the highest single-season total by a UF quarterback since Tebow threw 30 in 2008… Finished the season tied for 17th nationally in touchdown-interception ratio… Among players with 315-plus attempts, he tied for 14th… Since the start of 1996, Tebow (7.50 – 2008; 5.33 – 2007; 4.20 – 2009) is the only Gator with a better touchdown-interception ratio than Franks’ 4.00 (24 to 6) in 2018… One of 12 FBS quarterbacks to throw more than 20 touchdowns and less than seven interceptions… Became the fourth Gators QB since 1996 to accomplish that aforementioned feat, and Franks had the second-most attempts (322) in that bundle, only trailing Tebow’s 2007 season (350)… Registered the highest passing yardage total since Tebow threw for 2,895 yards in 2009… His four games of three-plus touchdown passes were the most such games since Tebow had four in 2008, and they were just one shy of UF quarterbacks’ combined total from the 50 games spanning 2014-17… His six 200-yard passing games are the most since Tebow’s seven in 2009… Capped his season with Offensive MVP honors in the Chick-fil-A Peach Bowl, as he joined Tebow as the only other Gators quarterback since the start of the 2000 season to record a passing touchdown and rushing touchdown in a bowl game.. Ended the 2018 season on a streak of 135 pass attempts without an interception (last INT vs. Georgia in 1st Quarter), which ranks as the fourth-longest streak in UF history…

2017 (REDSHIRT FRESHMAN): Played in all 11 games and made eight starts at quarterback, throwing for 1,438 yards with nine touchdowns and eight interceptions on the season…  Became the first redshirt freshman to start a season opener at QB for the Gators since Kyle Morris in 1988… Recorded 212 yards passing (19-for-28) with two touchdowns and one interception against Tennessee… UF defeated UT with a 63-yard touchdown pass from Franks to Tyrie Cleveland on the final play of the game… That play marked the only time in school history that the Gators defeated an opponent with a touchdown on the final play of regulation… Antonio Callaway’s catch-and-run from Will Grier against the Vols in 2015, which was also a 63-yard pass play, gave the Gators’ a 28-27 victory that season… Florida ran the exact same play, “Train Ride Open, Big Bend In.” on both occasions… Recorded a 79-yard rush in the third quarter against Texas A&M on Oct. 14, which is the longest run by a UF quarterback in school history… Combined with Malik Zaire to throw for 256 passing yards at Missouri on Nov. 4, which was a season-high for the Gators… In addition, that contest marked the first time that UF threw for at least 250 yards against an SEC opponent since Dec. 3, 2016 (2016 SEC Championship, Alabama)… Became just the second UF quarterback since 2012 to start at least eight games in a season… Totaled a 3-5 record as a starter…

2016 (FRESHMAN): Did not appear in a game and redshirted.

PRIOR TO FLORIDA:
Participated in the 2016 US Army All-American Bowl in San Antonio, Texas… 2015 Elite 11 Finalist (was on the final squad of eleven and was the first invited to the competition)… Participated in Nike’s The Opening 2015 in Beaverton, Oregon… Named Class 5A Second Team All-State as both a junior and senior… Led his team to a 13-2 record as a senior and reached the Class 5A State Championship Game… Senior Season: Threw for 2766 yards with 35 touchdowns; also had 28 carries for 245 yards and four touchdowns, was the kicker for all kickoffs and field goals, along with most extra points and punts, made 90% (43-47) of his extra points and four of seven field goals, including a long of 47 yards, his longest punt was 68 yards and 44 of his 74 kickoffs were touchbacks… Junior Season: Threw for 2249 yards with 28 touchdowns; also had 28 carries for 425 yards and three touchdowns, was the kicker and punter as well, having 60 of his 74 kickoffs be touchbacks, seven of his 22 punts be inside the 20, 46 of 50 PAT attempts made, and six for seven on field goals with a long of 39 yards… Sophomore Season: Threw for 1842 yards with 18 touchdowns; also ran four times for 36 yards and a touchdown, handled most of the team’s kicking and punting duties, with nine of his 24 punts being touchbacks, 23 of his 31 extra points being made, and four of five of his field goals being made with a long of 33 yards… Played for Coach Barry Klees… Brother, Jordan, played wide receiver and signed with UCF in 2014… Also played baseball in high school.

2019 MLB DRAFT:
Franks was selected by the Boston Red Sox with the 947th pick in the 31st round of the 2019 MLB Amateur Draft… “I’m flattered that the Red Sox picked me this afternoon,” Franks said on June 5, 2019 following his selection. “However, I’m living out my dream being the quarterback of the Florida Gators. We’re all working extremely hard this offseason and I cannot wait to hit the field this fall.”… Franks hasn’t played baseball since his junior year of high school because he graduated in Dec. 2015 and early enrolled at Florida, was rated as the No. 500 overall baseball prospect in the country by Perfect Game in the spring of 2016… In addition, Franks was rated as the No. 117 overall player in the state of Florida and the No. 41 right-handed pitcher nationally… Franks was the first UF quarterback selected in the MLB Amateur Draft since Jeff Driskel was selected in the 29th round by the Red Sox in 2013.