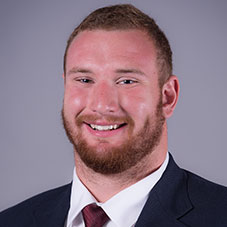 CAREER: The nation’s top-graded center by Pro Football Focus as both a junior and senior … Three-year starter and team captain as a senior … An anchor on the offensive line, who has size, power, experience and technique to play at the next level … Played in 42 games with 33 consecutive starts … Mostly played center the last two seasons but has played 15 career games at right guard … Saw action in 2,603 offensive snaps … Never allowed a sack in his four-year career … Prior to a season-ending injury in the seventh game of 2017, he only missed 43 offensive snaps since becoming a permanent starter as a sophomore in 2015 … Two-time member of the Fall SEC Academic Honor Roll … Graduated with a degree in recreation and sport management in December 2017.

2017 (SENIOR): Led all Football Bowl Subdivision offensive linemen with a 93.7 overall grade, according to Pro Football Focus … Paced all centers with a 92.4 grade in the run game to go with an 88.3 mark in pass protection in eight games played … Allowed only one pressure on his 255 pass blocking snaps … Played 488 total snaps … Blocked for the offense to rush for 200-plus yards in three of the first four games … Posted at least an 85 percent game grade in five different games … vs. Texas A&M (Sept. 23): Posted a season-high 95.2 overall game grade, which led all FBS centers that week … Had a 93.8 grade in the run game … at No. 1 Alabama (Oct. 14): Earned a solid 87.2 overall game grade, which ranked fifth that week among centers nationally.

2016 (JUNIOR): Started all 13 games – 12 at center and one at right guard – to run his streak to 26 straight … Graded out as the top center in the nation by PFF twice after his performance during wins over No. 11 Florida and at Mississippi State … Graded out as a top three center in five of 12 games and earned an 80 percent grade or higher from PFF seven times … Didn’t allow a sack for the second straight season, decreased his total number of pressures allowed from 19 in 2015 to just 12 and helped Arkansas average 6.4 yards per carry on runs between center and left guard during the regular season according to PFF … Named to the PFF Team of the Week and also earned SEC Offensive Lineman of the Week honors on Sept. 18 … Played more than 900 snaps … Helped pave the way for running back Rawleigh Williams III to rush for 1,360 yards, while quarterback Austin Allen threw for 3,430 yards, including a league-best 2,291 in conference play … Helped lead an offensive line that blocked for 428.4 yards of total offense per game … Opened holes for Williams and Devwah Whaley to total nine 100-yard rushing performances … Helped the offense log both 200 yards passing and rushing in the same game five times … at No. 15 TCU (Sept. 10): Gave Allen a key push at the goal line on his 5-yard game-winning TD run in the second overtime at TCU … Opened lanes for Williams to run for 137 yards and blocked as Allen threw for 233 yards … vs. Texas State (Sept. 17): Named the SEC Offensive Lineman of the Week after making the move from center to right guard and helping Arkansas rush for 226 yards and three scores on the ground … Graded out at a career-best 92 percent following the win as the offense eclipsed 200 yards rushing and 200 yards passing in the same game for the fourth time in its previous 10 contests … vs. Alcorn State (Oct. 1): Opened lanes for two 100-yard rushers as Devwah Whaley went for 135 yards and a touchdown, while Williams added 126 yards … Blocked for 559 yards of total offense, including 353 yards on the ground … vs. No. 12 Ole Miss (Oct. 15): Helped the offense rush for 200 yards and pass for 229 in the win … 180 yards on the ground came from Williams … vs. No. 11 Florida (Nov. 5): Cleared paths for 223 yards rushing, including 148 and two touchdowns by Williams, against the Gators’ top-10 run defense … Provided time for 243 yards passing and 466 yards of total offense … at Mississippi State (Nov. 19): Paved the way for the fourth-most yards in school history as the offense compiled 661 total yards, including 357 on the ground and 304 in the air … Part of offensive line that didn’t allow a sack, which snapped Mississippi State’s seven-game streak with at least one sack … Cleared paths for Williams’ career-high 205 yards rushing and four TDs, as well as Whaley’s 112 yards and one score on the ground … Provided time for Allen to complete 18 of 25 passes for 303 yards and two TDs … at Missouri (Nov. 25): Blocked for 500-plus yards of total offense for the third time, including 348 yards through the air and 155 on the ground … Helped Williams post his seventh 100-yard rushing game and blocked for Allen to tally his fourth 300-yard passing effort.

2015 (SOPHOMORE): Started all 13 games at right guard … Helped Arkansas lead the SEC in fewest sacks allowed for the third straight season … Didn’t commit a penalty over the final nine games … Earned an 80 percent offensive grade or better in six games … Played over 900 snaps at right guard to earn an average grade of 78 percent … Totaled 54 knockdowns … Paved the way for running back Alex Collins to run for over 1,500 yards and become just the third player in SEC history with three straight 1,000-yard campaigns to begin his career … Collins tied for the SEC lead with 10 100-yard rushing games, equaling Darren McFadden’s program single-season record … Arkansas led the SEC with five 200-yard rushing games in league play and had a total of eight on the year … vs. Texas Tech (Sept. 19): Registered a career and team-high 10 knockdowns and posted an 85 percent grade as Arkansas put together the first of its eight 200-yard rushing performances … vs. No. 14 Texas A&M (Sept. 26): Followed 10 knockdown performance with a team-best eight more and an 80 percent grade … at Tennessee (Oct. 3): Put together third straight game with at least an 80 percent grade, helping pave the way for 250 yards rushing on 50 carries for Arkansas’ first win in Knoxville since 1992 … vs. UT Martin (Oct. 31): Season-best 91 percent grade came during an offensive performance that featured nearly 600 yards of total offense and nine touchdowns … at No. 19 Ole Miss (Nov. 7): Posted an offensive line grade of 85 during a career-high 87 snaps to help Arkansas score 50-plus points for the third straight game during its overtime win … at No. 9 LSU (Nov. 14): Put together an 82 percent grade with four knockdowns as Arkansas ran for 299 yards on 40 carries, highlighted by TD runs of 80 and 69 yards, respectively, for the two longest rushing TDs of the season against LSU.

2014 (TRUE FRESHMAN): Saw action in nine contests as a true freshman center … Participated in more than 200 snaps, averaging a grade of 70 percent and was only flagged twice … Blocked for running backs Alex Collins and Jonathan Williams, who were the only FBS teammates to each rush for 1,000-plus yards in the 2014 season … Helped protect quarterback Brandon Allen as the offensive line led the SEC with 14 sacks allowed … vs. Nicholls (Sept. 6): Tallied five knockdown blocks in the home-opening win … at Texas Tech (Sept. 13): Registered three knockdowns, paving the way for Arkansas to post over 400 yards on the ground in the non-conference road victory … at No. 1 Mississippi State (Nov. 1): Earned a season-high offensive line grade of 89 percent against the top-ranked Bulldogs.

HIGH SCHOOL: Given four stars from ESPN, Scout and 247Sports … Ranked as the No. 3 prospect from Minnesota by ESPN, 247Sports and Rivals … According to 247Sports Composite ranking, he had a grade of 89 and was the country’s 24th-best offensive tackle … One of two 2014 Army All-American Bowl nominees from Minnesota and also was invited to the Offense-Defense All-American Bowl following his senior season … During his career at Chanhassen High School, was twice named all-state, all-metro and all-conference … Also played defense and accrued 102 tackles, including 14 sacks, and two fumble recoveries … In his senior year, he helped the Storm to a school-record seven-game win streak from week three to the quarterfinal round of the sectional playoffs … Played basketball and contested the shot put and discus throw and was a captain on all three teams … An honor-roll student … Coached by Bill Rosberg … Chose Arkansas over offers from Ohio State, Florida State, Wisconsin, Vanderbilt and Minnesota.