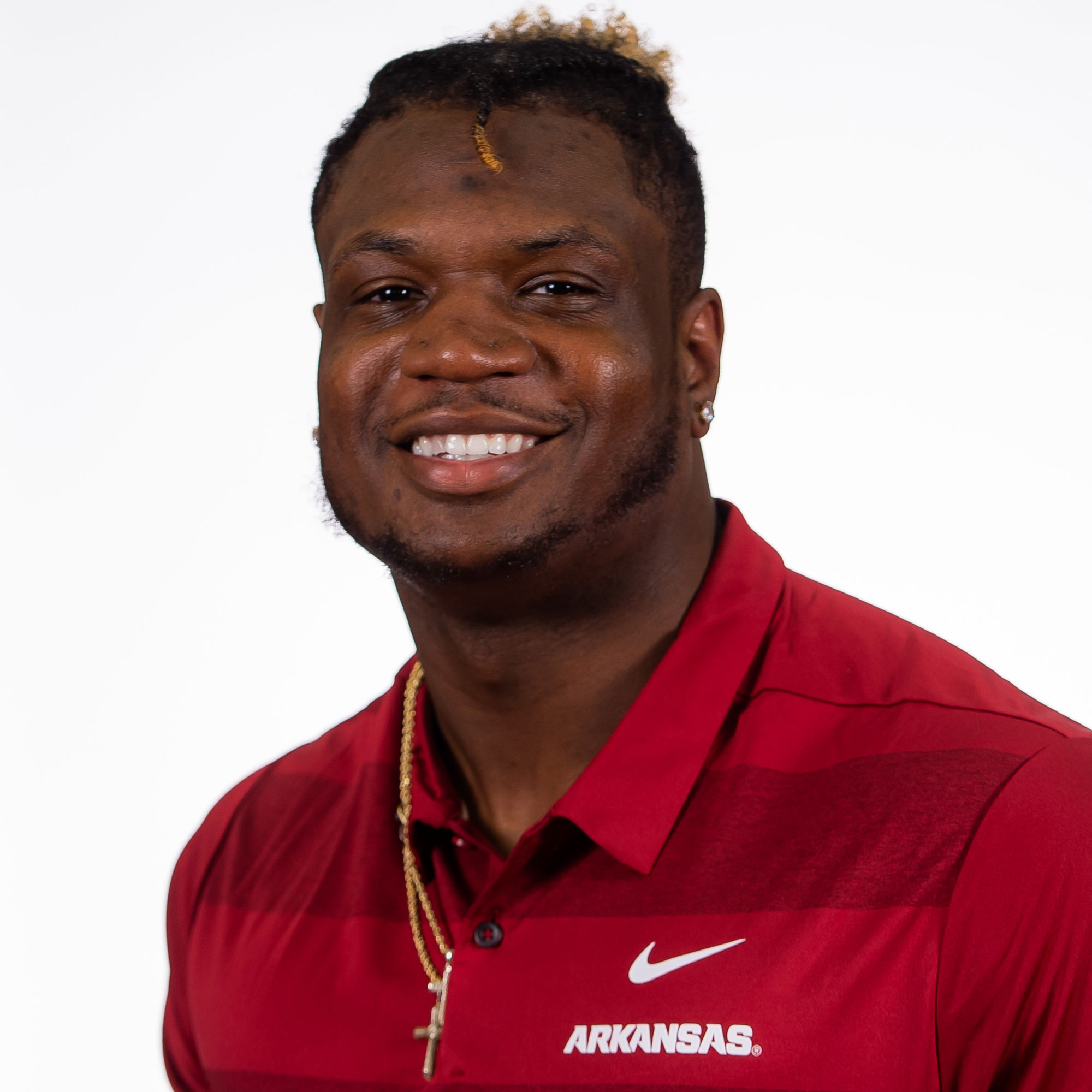 2019 (SENIOR): Started 11 of 12 games played at defensive end as a senior for the Razorbacks in 2019 … Totaled 428 snaps, with 391 coming on the D-line … Recorded 33 tackles, 16 solo, with 5.5 tackles for loss and 2.5 sacks … Also forced a fumble and was credited with a quarterback hurry and pass breakup … Tallied the second-most tackles by a defensive lineman in 2019 … Opened the season with three against Portland State, including a tackle for loss … Would post at least one TFL in each of the first five games of the year … Notched a season-best seven stops in the second game of the year and SEC opener at Ole Miss on Sept. 7 … Both of his tackles against Colorado State (Sept. 14) went for losses totaling 12 yards … It was his third-straight game with at least half-a-sack and back-to-back with one … Put up five stops in back-to-back games against Texas A&M (Sept. 28) and Kentucky (Oct. 12), with a forced fumble vs. the Aggies in Arlington … Posted two tackles in four of the last five games of the year, missing the season finale.

2018 (JUNIOR): Played in 11 of 12 games for the Razorbacks in 2018, starting each of the first two games at defensive end … Totaled 246 snaps over the course of his junior season, with 199 coming on the defensive line and 47 on special teams … Recorded 13 total tackles, three solo, including 1.5 tackles for loss (three yards) … Also was credited for two quarterback hurries, one pass breakup and a fumble recovery against North Texas on Sept. 15 … Earned TFLs in each of the first two games, with a half tackle for loss in the season opener as part of a four-stop performance vs. Eastern Illinois, as well as one TFL, three total tackles, at Colorado State a week later … Posted stops in four more games in 2018, securing multi-tackle performances in back-to-back games at Auburn (Sept. 22) and Texas A&M (Sept. 29) … Also made stops against LSU and Mississippi State … Put together five games of 70.0 tackling grades from PFF, ending the season with an overall mark of 70.3 in the category … Had a season-best overall defensive grade against Alabama with a 74.0 … Part of a defensive crew that racked up 882 total tackles over the course of the 2018 campaign.

2017 (SOPHOMORE): Saw action in four games … Played six defensive snaps and participated on special teams … Forced a fumble that was recovered 18 yards for a touchdown by Henre’ Toliver in the season opener against Florida A&M (Aug. 31).

2016 (JUNIOR COLLEGE) AT HUTCHINSON CC: Earned KJCCC All-Conference honorable mention status … Led the team with 18.5 tackles for loss … Tied for the team lead with 6.0 sacks … Totaled 60 tackles in 11 games to rank fifth on the team … 37 of his 60 tackles were of the solo variety … Part of a defense that allowed only 18.2 points per game and just 91.1 yards per game on the ground … 4.5 of his sacks came against conference opponents … Logged eight or more tackles five times … Tallied a season-high 13 stops, including 4.0 for loss, in a 21-12 win against Iowa Western CC … Recorded a tackle for loss in seven games, including five multiple tackle for loss performances … Racked up 10.5 tackles for loss through the last four games of the season … Notched eight tackles, a season-high 2.5 sacks and 4.0 tackles for loss against Independence CC … Coached by Rion Rhoades … Chose Arkansas over West Virginia, Louisville, Nebraska, Texas Tech, Syracuse, Maryland, and Buffalo.