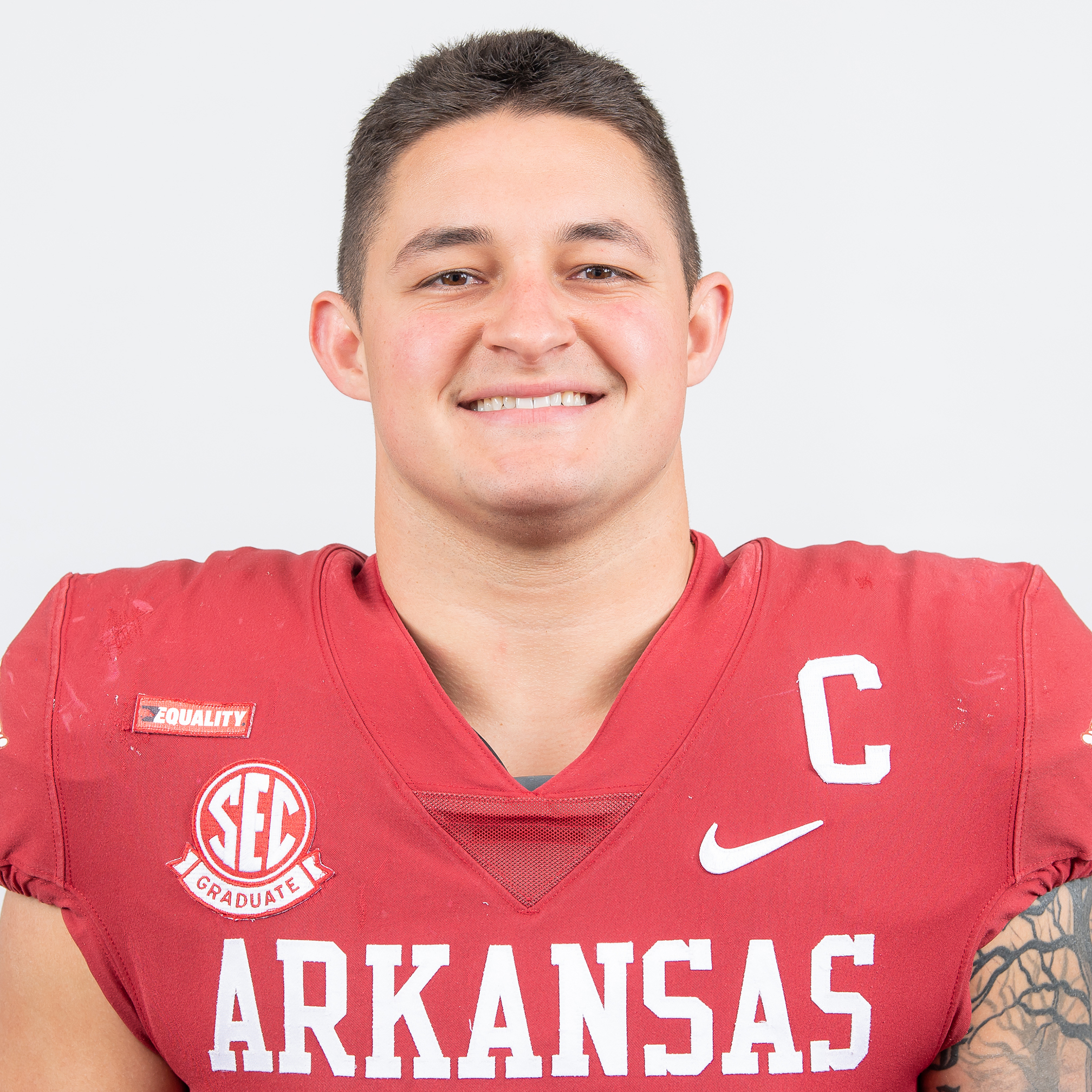 2021 (COVID REDSHIRT SENIOR): Capped a historic career at Arkansas as the school’s first-ever Burlsworth Trophy winner for the nation’s best player that started his career as a walk-on while also being named a finalist for the Jason Witten Collegiate Man of the Year Award … Started all 13 games for the Razorbacks in his last year, eclipsing the 100-tackle mark for the second straight year with 101 stops – one of three Arkansas LBs to record 100+ tackles (Bumper Pool – 125, Hayden Henry – 100) … Enjoyed a monster game in win over Texas (Sept. 11) making 13 stops, including 2.5 tackles for loss … Broke up a pass and made six stops in victory over Georgia Southern (Sept. 18) … Recorded a TFL as part of his five tackles in Southwest Classic victory vs. Texas A&M (Sept. 25) inside AT&T Stadium … Made 12 tackles and recorded a TFL for the third time in four games in game at Georgia (Oct. 2) … Put up his second straight double-digit tackle performance, matching a season-best with 13 stops at Ole Miss (Oct. 9) … Recorded seven tackles against Auburn (Oct. 23), including a tackle for loss … Made seven stops in win over Mississippi State (Nov. 6) … Notched his fourth double-digit tackle game with 11 stops in Battle for the Boot victory at LSU (Nov. 13), including 1.5 TFLs … Backed up his 11 tackles at LSU with 11 tackles at Alabama (Nov. 20) … Made seven stops to help Arkansas claim its third trophy of the season with Battle Line Rivalry win over Missouri (Nov. 26) … Finished off the season with five tackles in Outback Bowl victory over Penn State (Jan. 1).

2020 (REDSHIRT SENIOR): Walter Camp and AFCA Second Team All-American … Burlsworth Trophy Finalist … Tabbed a Third Team All-American by Phil Steele … Selected First Team All-SEC by both the coaches and AP … Joined Martrell Spaight (2014) as the only two Razorback defenders to garner both AP and coaches All-SEC recognition in the last 10 seasons … Started nine games at linebacker posting a team-best 111 total tackles and 7.5 tackles for loss with 2.0 sacks … Also intercepted one pass, broke up five passes and registered one quarterback hurry … Tied for the nation’s lead alongside Akron’s Bubba Arslanian averaging 12.3 tackles per game … Made his first career start in the season opener against No. 4 Georgia and made 13 tackles …  Made 15 tackles with 0.5 tackles for loss and broke up a pass in the win over No. 16 Mississippi State (Oct. 3) … Named co-SEC Defensive Player of the Week, Bronko Nagurski National Player of the Week and Chuck Bednarik Player of the Week for his career-high 19 tackle, 3.0 tackles for loss, 1.0 sack, two passes broken up and an interception return for a touchdown performance in the win over Ole Miss (Oct. 17) … He became just the second FBS player since 2000 to record at least 15 tackles with 3.0 tackles for loss with an interception return for a touchdown … Registered 12 tackles with a quarterback hurry in the win over Tennessee (Nov. 7) … Logged 15 tackles including seven solo stops at No. 6 Florida … The following week, tied his career-high of 19 tackles with 1.5 tackles for loss, 1.0 sack, one quarterback hurry and one pass broken up against LSU (Nov. 21) … First SEC player to record two games with at least 19 tackles since 2012 … Became the first Razorback since 2003 to make 15+ tackles in back-to-back games … Played in 45 straight games before missing the regular season finale against No. 1 Alabama due to injury … Recorded 15 or more tackles four times, the most by a Razorback since 2003 and the most by an SEC player since 2015 … First SEC player with two 19 or more tackle games in the same season since 2012 … Nation’s only FBS player to post six games of at least 12 tackles … Saw action on 662 defensive snaps and 74 special teams snaps, according to Pro Football Focus … Posted a PFF defensive grade of 73.4 and a coverage grade of 84.5, the latter leading all SEC linebackers.

2019 (REDSHIRT JUNIOR): Played in all 12 games for the Razorbacks in 2019 … Totaled 388 plays, according to Pro Football Focus, seeing time both lined up in the box at linebacker (148 snaps) and on Arkansas’ various special teams units … Recorded 39 tackles, nine solo, with three for loss, including a sack … Opened the season with four tackles against Portland State on Aug. 31, with one TFL … Tallied five stops in the SEC opener at Ole Miss (Sept. 7) … Notched four tackles against Colorado State, with 1.5 for loss, including a sack … Had a stop in each of the next two games vs. San Jose State and Texas A&M, with half-a-tackle-for-loss against the Aggies in Arlington … Posted four tackles vs. both Kentucky (Oct. 12) and Auburn (Oct. 19), followed by five at Alabama on Oct. 26 … Put together a season-best performance seven tackles vs. Western Kentucky on Nov. 9 after one stop against Mississippi State the week before … Ended the season with two stops at LSU (Nov. 23) and one vs. Missouri (Nov. 29) in Little Rock … Consistently put together strong tackling marks from PFF, staying up above 73.0 in each of the first seven games, with two above 82.0 against Portland State (82.8) and Kentucky (82.0) … Top defensive grade came at Ole Miss at 84.3.

2018 (REDSHIRT SOPHOMORE): Played in all 12 games for the Razorbacks in 2018 … Totaled 299 snaps over the course of his sophomore season, according to Pro Football Focus, seeing 110 on defense and 189 on Arkansas special teams units … Recorded 24 total tackles, eight solo, including 2.5 for loss, while also getting credit for two quarterback hurries and one pass breakup … Opened the season with five tackles against Eastern Illinois, including 0.5 TFL for a yard … Posted at least half-a-tackle for loss in each of the first three contests, notching the same line at Colorado State behind a total of four stops … Added three tackles vs. North Texas, which featured a TFL for two yards … Other half-a-tackle for loss came against Alabama on Oct. 6 as part of a five-tackle performance, including a season-best three solo stops … Tallied tackles in seven of the last eight games of the year … Earned tackling grades over 73.0 from PFF in four games, with a 2018-high of 80.6 coming in the first game of the season against the Panthers … Also topped out in run defense in that contest at 73.7 … Recorded his best overall defensive grade in the finale at Missouri, putting together a mark of 76.9 … Finished the season with a defensive pressure grade of 83.0 from the outlet … Part of a defensive crew that racked up 882 total tackles over the course of the 2018 campaign.

2017 (REDSHIRT FRESHMAN): Played in all 12 games for the Razorbacks in 2017 … Recorded 38 total tackles, 22 solo, 3.5 tackles for loss, 1.0 sacks, two passes broken up, two quarterback hurries and one forced fumble … Totaled 553 snaps according to Pro Football Focus, with 169 occurring on special teams … Recorded at least one tackle in all 12 games and made a solo stop in all but one game … Made five tackles, including two solo stops and a pass broken up, in his collegiate debut in a 49-7 win over Florida A&M (Aug. 31) … The following week assisted on his first tackle for loss at TCU (Sept. 9) … Broke up his second pass of the year and made three solo stops in a win over New Mexico State (Sept. 30) … Forced his first career fumble against Auburn (Oct. 21) … Registered his first career sack against Mississippi State (Nov. 18) and finished with 2.0 tackles for loss and four total tackles … Made a season-high eight tackles in the season finale against Missouri (Nov. 24) … Put together his best overall defensive grade of 90.4 against New Mexico State in conjunction with his best coverage grade of 85.1 … Top run defense grade of the year was 79.9 against Mississippi State and scored his best pass rush grade of 75.4 versus Missouri.

HIGH SCHOOL: Tabbed the No. 22 player in the state of Arkansas and the No. 71 inside linebacker in the class by 247Sports … A three-year letter winner at Greenwood High School … Named the 2015 Arkansas Democrat-Gazette Defensive Player of the Year, Southwest Times Record Player of the Year and earned Arkansas Democrat-Gazette All-Prep honors as a senior … Selected to the All-Arkansas Varsity first team defense … Finished the season with 149 tackles, including 25 for loss, three sacks, four pass deflections and two fumble recoveries … Also had 11 receptions for 283 yards and five touchdowns … Helped Greenwood High School to a 12-1 record and the 6A state championship where he tallied 13 tackles … Earned All-State honors as a junior … Logged 80 tackles, including 10 for loss, one sack, three interceptions and three fumble recoveries … Also caught six passes for 122 yards and two touchdowns, helping the Bulldogs to a 7-5 record and the second round of the 6A state playoffs … As a sophomore, registered 88 tackles, including 17 for loss, two quarterback hurries, two forced fumbles, three interceptions and one pass breakup … Also had 16 receptions for 202 yards and six touchdowns … Coached by head coach Rick Jones … Chose Arkansas over Air Force, Central Arkansas, Tulsa and others.

PERSONAL: Born on Jan. 23, 1998 … Married to Sydnie … Son of Matt Morgan and Annie Shaw … Younger brother of former Arkansas wide receiver Drew Morgan … Also has four younger sisters, Paige, MJ, Ella, and Hattie, and a younger brother Braden … Graduated in 2019 with a degree in Kinesiology … Graduated with a master’s degree in Operations Management in 2020.