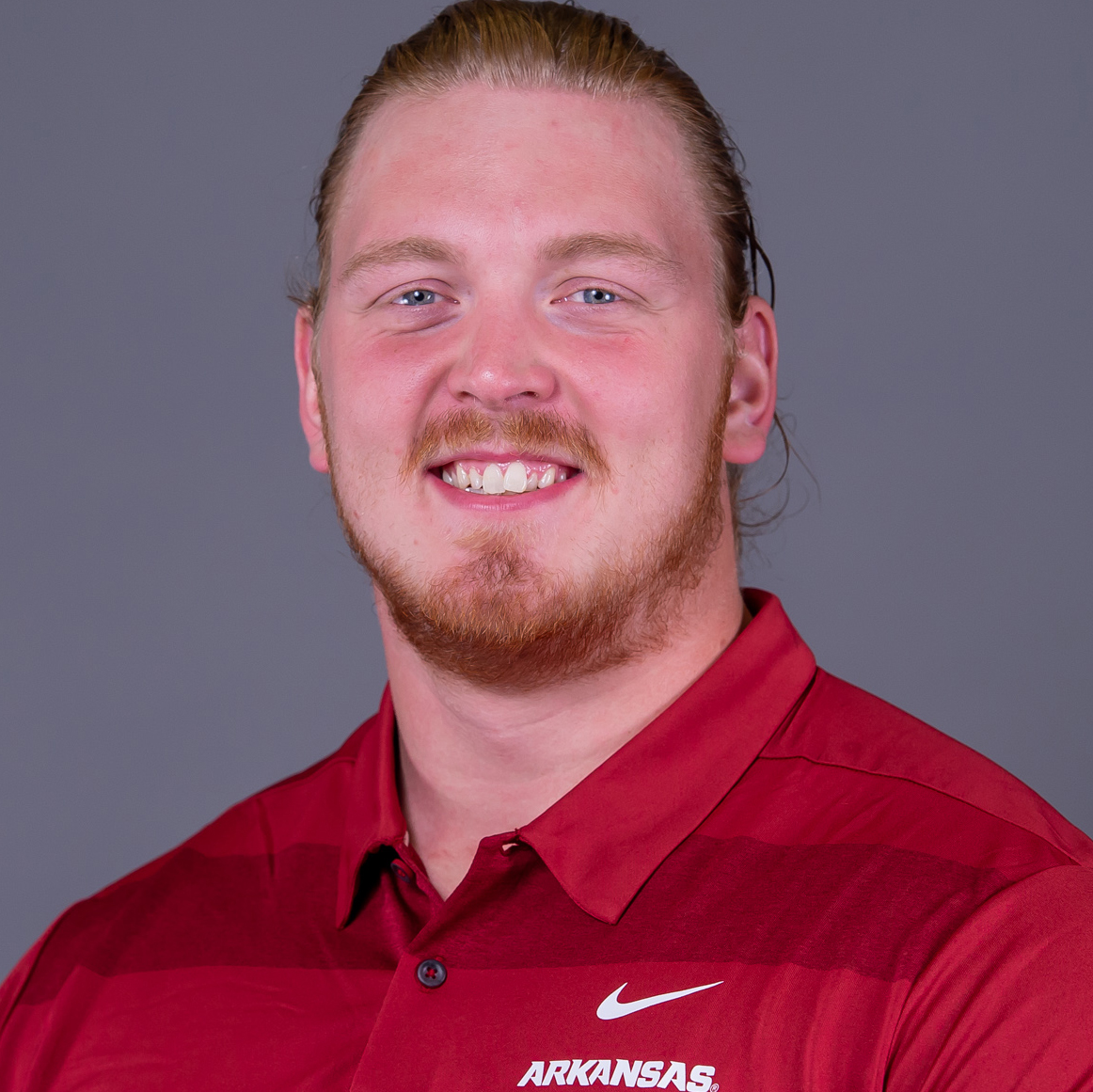 2018 (SENIOR): Started all 12 games for the Razorbacks in his final season on the Hill … Earned AP All-SEC Second Team accolades … Named CoSIDA Google Cloud Academic All-District honoree … Twice selected to the Pro Football Focus SEC Team of the Week after performances against Vanderbilt (Oct. 27) and LSU (Nov. 10) … Totaled 815 snaps, 440 in pass protection, beginning the season at the center position, moving to the left guard spot before rounding out the year back at C due to a teammate injury … Did not allow a sack during the 2018 season, marking back-to-back years to accomplish the feat … Finished the season with an 88.5 grade from PFF in pass block protection, which ranked fifth in the SEC among offensive linemen … Recorded seven games with marks over 85.0, including a season-high 90.1 grade at Mississippi State on Nov. 17 in Starkville … Put together his top combined run blocking & pass protection marks against Vanderbilt, earning grades of 87.2 in pass blocking & 78.3 in run protection for an overall grade of 78.8 … Played in over 70 snaps five contests, including a season-high 78 at Colorado State in the second week of the season … Helped the Arkansas offense to 4,028 yards of total offense and 28 touchdowns, with 2,307 yards and 17 scores coming through the air … Entered the season with a Preseason Second Team All-America mention from Phil Steele, as well as five Preseason All-SEC honors from Phil Steele (first team), the SEC coaches (second team), the SEC media (second team), Lindy’s (second team) and Athlon Sports (third team) … Landed on the Wuerffel Trophy & Outland Trophy watch lists and was also a nominee for the Allstate AFCA Good Works Team … Capped his collegiate career with 2,446 snaps on the offensive line, with 1,291 in pass protection, allowing just three sacks, all coming in 2016.

2017 (JUNIOR): A leader on the offensive line who started at left guard in all 12 games … Saw action in 747 snaps … Participated in 100 percent of offensive snaps in eight games … Did not allow a sack all season across 389 snaps in pass protection … Allowed just two quarterback hits and only nine hurries … Flagged just twice on the season … No. 9 overall graded offensive lineman in the SEC and the No. 2 graded guard, according to Pro Football Focus (85.6) … Graded out at 80 percent or better overall in six games, including four times in SEC action … Part of an offensive line that paved the way for the offense to rush for 200 or more yards in five games … Helped the offense top the 400-yard mark six times … vs. Florida A&M (Aug. 31): Produced a season-best 90.6 game grade by PFF in 56 snaps played, good for the second-best grade among offensive FBS guards for the week … Elite in the run game with a 93.2 run-blocking grade from PFF … at Ole Miss (Oct. 28): Participated in a season-high 85 snaps … Turned in an 85.5 overall grade by PFF, good for eighth-best in FBS among guards that week … Also boasted an 87.1 pass-blocking grade and a grade of 80.6 in the run game from PFF … vs. Missouri (Nov. 24): Closed the season with his second-highest overall grade of the year at 85.5 by PFF, which also ranked sixth nationally among guards … Registered his third run-blocking grade of 86.0 or better on the season (86.3) by PFF.

2016 (SOPHOMORE): Started all 13 games at left guard and played more than 850 snaps … Part of an offensive line that blocked for 428.4 yards of total offense per game … Finished the year with an 83.6 overall grade by Pro Football Focus … Posted a grade of 80.0 or higher from PFF in six games … Allowed only three sacks on the season … Produced an 88.8 run-blocking grade by PFF, which ranked No. 9 among all FBS guards … Helped the offense log both 200 yards passing and rushing in the same game five times … Paved the way for Rawleigh Williams III to capture the SEC regular season rushing title with 1,326 yards on the ground, while Austin Allen threw for an SEC-best 3,430 yards … at No. 15 TCU (Sept. 10): Opened lanes for Williams to run for 137 yards and blocked as Allen threw for 233 yards, which led to a staggering 91.9 grade in the run game from PFF… vs. Texas State (Sept. 17): Earned a season-high 87.5 game grade from PFF, which ranked No. 10 nationally among guards that week … Helped the offense rush for 226 yards and three scores on the ground and finished with an 88.9 run-blocking grade by PFF … vs. Alcorn State (Oct. 1): Earned an 84.4 game grade by PFF … Helped pave the way for two 100-yard rushers as Devwah Whaley went for 135 yards and a touchdown, while Williams added 126 yards … Blocked for 559 yards of total offense, including 353 yards on the ground … vs. No. 12 Ole Miss (Oct. 15): Helped the offense rush for 200 yards and pass for 229 in the win …180 yards on the ground came from Williams … Logged an 83.9 game grade from PFF … vs. No. 11 Florida (Nov. 5): Cleared paths for 223 yards rushing, including 148 and two touchdowns by Williams, against the Gators’ top-10 run defense … Provided time for 243 yards passing and 466 yards of total offense … at Mississippi State (Nov. 19): Picked up a game grade of 80.1 from PFF … Paved the way for the fourth-most yards in school history as the offense compiled 661 total yards, including 357 on the ground and 304 in the air … Part of offensive line that didn’t allow a sack, which snapped Mississippi State’s seven-game streak with at least one sack … Cleared paths for Williams’ career-high 205 yards rushing and four TDs, as well as Whaley’s 112 yards and one score on the ground … Provided time for Allen to complete 18 of 25 passes for 303 yards and two TDs … at Missouri (Nov. 25): Blocked for 500-plus yards of total offense for the third time, including 348 yards through the air and 155 on the ground … Helped Williams post his seventh 100-yard rushing game and blocked for Allen to tally his fourth 300-yard passing effort.

2015 (FRESHMAN): Made three tackles in 10 games played at defensive tackle … Transitioned to the offensive line during 2016 spring workouts.