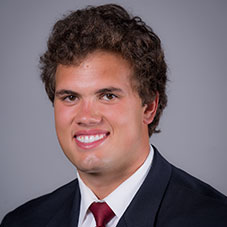 Career (2013-15)
Hauled in 116 passes for 1,661 yards and nine touchdowns … Became one of just eight tight ends in SEC history to reach the triple-digit mark in receptions while playing in the conference … Of the eight, he is one of four to tally more than 1,500 receiving yards … His 1,661 career receiving yards rank second in program history among tight ends, only trailing D.J. Williams (1,855; 2007-10) … Totaled four 100-yard receiving games, equaling D.J. Williams’ program record by a tight end … 93 of his 116 career receptions resulted in a first down or touchdown, for a conversion rate of 80 percent … Of his 1,661 career receiving yards, 635 (39 catches) came on third down – more than any other down … His receptions on third down passing plays resulted in a first down or touchdown 97.4 percent of the time (36 first downs, two touchdowns) … Reeled in 62 percent of his targets (116 of 188) for an average of 8.8 yards per look.

Consensus All-American … Became the second Razorback to win the John Mackey Award – awarded annually to the most outstanding tight end in college football – joining D.J. Williams (2010) and making Arkansas the only school to produce multiple winners … Played and started all 13 games … Led all Football Bowl Subdivision (FBS) tight ends with 739 yards receiving on 51 receptions, both career highs … Finished season with three touchdown receptions … Arkansas’ second leading receiver … His 51 receptions were the most by an SEC tight end in a single season since D.J. Williams’ 54 in 2010 … Did not drop a single pass during the season … Caught at least one pass in 23-straight games, which is the longest active streak among SEC tight ends and fourth longest among FBS tight ends … Led all FBS tight ends with 36 first down catches and 21 plays of 15-plus yards … His receptions resulted in a first down or a touchdown 73 percent of the time … Topped SEC tight ends in first down catches for the third-straight season … Hauled in 69 percent of his targets (51 of 74), averaging 9.98 yards per look … Tallied two 100-yard receiving games, which led SEC tight ends and were tied for second most nationally among tight ends … Led all FBS tight ends in the following third down categories: Yards receiving (306), first downs (16) and 15-plus yard catches (9) … Tied for second among SEC receivers in third down receptions (18), which ranked second among FBS tight ends … Combined for an SEC leading 1,128 yards receiving and eight touchdowns with tight end mate Jeremy Sprinkle … The duo’s 1,128 yards receiving were the most by an Arkansas tight end corps in program history, while their eight touchdown receptions were the most since D.J. Williams (3), Andrew Davie (3), Mitchell Bailey (1) and Ben Cleveland (1) totaled eight in 2008 … As a blocker, didn’t allow a sack or a quarterback hurry this season and helped the Razorbacks rush for more than 200 yards in an SEC-best six league games … vs. Toledo (Sept. 12): Had career-highs in receptions (8) and yards receiving (117) … Recorded his first 100-plus yard receiving game of the season and the third of his career … Made seven catches of 10-plus yards … vs. Texas Tech (Sept. 19): Hauled in a 7-yard touchdown pass in the second quarter, which was his first of the season, including his first ever in Fayetteville, and seventh of his career … at Tennessee (Oct. 3): Had three receptions for 62 yards including a 51-yard catch in the third quarter … Each of his three catches went for a first down … vs. Auburn (Oct. 24): Recorded five catches for 68 yards … Made back-to-back 20-plus yard grabs, the first of which came on the opening drive of the game and helped set up an 11-yard touchdown rush by wide receiver Dominique Reed … at LSU (Nov. 14): Reeled in his 100th career catch during the opening possession of the game … Totaled three receptions, finishing with 21 yards … Mississippi State (Nov. 21): Had seven catches for a career-high 129 yards, which helped him surpass his 2013 and 2014 season totals for receptions and yards receiving … Hauled in a career-high two touchdown passes, each coming in the third quarter … His first touchdown of the contest was a 39-yarder that gave the Razorbacks a 35-31 lead … Grabbed his second touchdown of the contest during the next possession after defensive lineman Taiwan Johnson recovered a fumble by Dak Prescott and took it to the MSU 40-yard line … Five of his receptions went for 15-plus yards … at Ole Miss (Nov. 7): The focal point of Arkansas’ fourth-and-25 conversion in overtime … Finished the game with 60 yards receiving on six receptions, including two that went for 20-plus yards … vs. Kansas State (Jan. 2): Totaled five receptions for 92 yards … Had four catches that went for 10-plus yards, including a 43-yard reception that set up a 14-yard touchdown run by Alex Collins on the next play during the fourth quarter.

Sophomore (2014)
Started 10 of 13 contests participated in … Selected to the Coaches All-SEC second team and an AP All-SEC honorable mention … Named to the preseason John Mackey Award Watch List and the CFPA Tight End Award Watch List … Selected preseason All-SEC second team by Phil Steele, Athlon, coaches and media … Hauled in 37 receptions for 513 yards and two touchdowns … Ranked No. 3 among league tight ends in both receptions (37) and receiving yards (513) … One of only two tight ends in the conference to tally a 100-plus receiving game … at No. 6 Auburn (Aug. 31): Caught a 14-yard touchdown pass in the first quarter of the season-opener … vs. No. 10 Georgia (Oct. 18): Caught five passes for 92 yards, including a four-yard touchdown reception … at No. 1 Mississippi State (Nov. 1): Caught a career-high seven receptions for a career-high 110 yards.

Freshman (2013)
Appeared in all 12 games with seven starts … Earned second-team All-SEC acclaim, Freshman All-America honors and was named to the SEC All-Freshman Team after catching 28 passes for 409 yards and a team-high-tying four touchdowns … Was one of two freshmen on the Mackey Award Midseason Watch List, which recognized the top 29 tight ends in the country … His receiving yards ranked third in the nation among freshmen tight ends, and was the only freshman tight end in the SEC with a 100-yard receiving game … Led SEC tight ends and ranked third in the conference by gaining a first down on 78.6 percent of his receptions … vs. Louisiana (Aug. 31): Led the Razorbacks with 75 receiving yards on five catches in his collegiate debut … at Rutgers (Sept. 21): Made first career start and caught two passes for 37 yards and one touchdown … vs. No. 10 Texas A&M (Sept. 28): Eclipsed the 100-yard receiving mark for the first time with 109 yards … at No. 1 Alabama (Oct. 19): Led the team with three receptions for 42 yards … at Ole Miss (Nov. 9): Made three catches for 26 yards and one touchdown … at No. 15 LSU (Nov. 29): Caught a career-high two touchdowns as part of a five-catch, 41-yard performance in the season finale.

High School
Rated as the No. 1 tight end prospect in the nation by Tom Lemming … Named to the PARADE All-America Team, a first-team All-American by 247Sports.com and a second-team All-American by Max Preps … Rivals.com ranked him as the No. 2 tight end in the country, and 247Sports and Scout.com tabbed him as the nation’s No. 4 tight end … ESPN ranked him as the No. 1 player in Arkansas, and Rivals and 247Sports had him as the No. 2 player in the state … As a senior, he caught 107 passes for 1,449 yards and 15 touchdowns while helping lead Pulaski Academy to the semifinal round of the 5A state playoffs … Following his senior year, he was selected to play in the Under Armour All-America Game, where he was voted a team captain and started for the White Team … Caught 64 passes for 1,093 yards and 16 touchdowns in his junior season as the Bruins claimed the 4A state championship and finished 14-0 … Played on both sides of the ball as a sophomore, hauling in 45 passes for 748 yards and 10 touchdowns and registering 30 tackles, three for loss, and one fumble recovery while P.A. advanced to the state title game and finished 13-2 … Involved in his church’s youth group and an FCA leader at P.A., where he helped lead a food drive for the homeless … Coached by Kevin Kelley … Chose Arkansas over Alabama after receiving numerous offers.