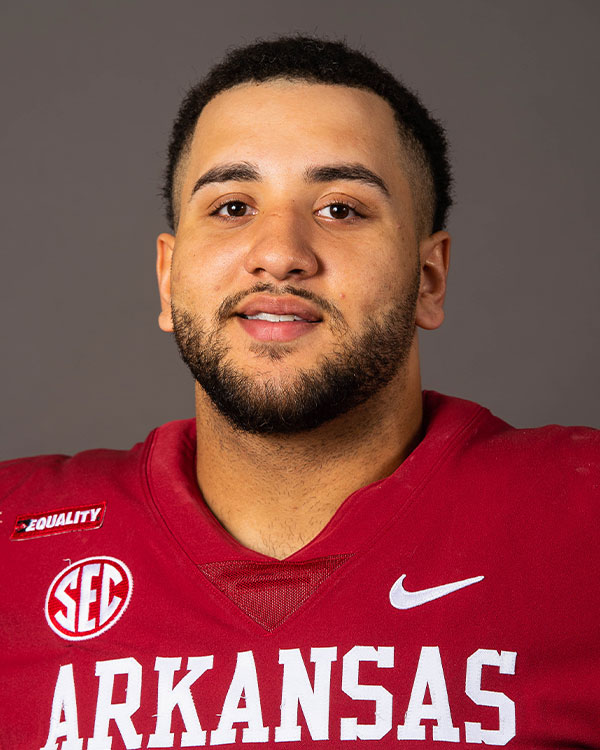 2021 (REDSHIRT JUNIOR): Appeared in 13 games with three starts … Finished with 21 tackles (five solo), 3.5 tackles for loss, 1.5 sacks and one forced fumble … Started in season opener against Rice (Sept. 4), recording a forced fumble for a sack and loss of seven yards … Finished with three assisted stops and 0.5 tackles for loss in win over Texas (Sept. 11) … Made one tackle in Georgia Southern win (Sept. 18) … Recorded three tackles with 0.5 tackles for loss versus Auburn (Oct. 16) … Notched a tackle for loss as part of his three tackles in win over UAPB (Oct. 23) … Made three tackles for the third straight game adding in a half sack in win over Mississippi State (Nov. 6) … Made one stop in overtime win at LSU (Nov. 13) … Recorded three tackles in victory over Missouri (Nov. 27) … Filed a season-best four stops in Outback Bowl win over Penn State (Jan. 1).

2020 (REDSHIRT SOPHOMORE): Played in nine games, making seven starts … Totaled 24 tackles (six solo), 0.5 tackles for loss, 0.5 sacks and one quarterback hurry … Made first career start and recorded three tackles and a quarterback hurry in the season opener against Georgia (Oct. 26) … Had one tackle at Mississippi State (Oct. 3) … Logged three tackles, including 0.5 sacks and 0.5 tackles for loss at Auburn (Oct. 10) … Did not record any statistics at Ole Miss (Oct. 17) … Made at least two stops in every game played for the remainder of the year … Collected two tackles at Texas A&M (Oct. 31) and three against Tennessee (Nov. 7) and at Florida (Nov. 14) … Did not play against LSU (Nov. 21) … Recorded three tackles at Missouri (Dec. 5) … Tallied a career-high six tackles in the season finale against Alabama (Dec. 12) … According to Pro Football Focus, played 457 defensive and 105 special teams snaps … Posted five games with a tackle grade over 70, with a season-high 75.0 at Florida.

2019 (REDSHIRT FRESHMAN): Played in all 12 games for the Razorbacks in 2019, appearing in 437 plays, including 296 on the defensive line, according to Pro Football Focus … Recorded 17 total tackles, seven solo, with one tackle for loss, including half-a-sack in the season finale against Missouri (Nov. 29) … His other half-TFL came against Colorado State on Sept. 14 in Fayetteville … Posted a tackle in nine of 12 games, with three multi-tackle performances – three at Ole Miss (Sept. 7), four vs. Colorado State (Sept. 14) and three vs. Mississippi State (Nov. 2) … Earned a rush defense grade of 81.9 against CSU, his top mark of the year from PFF … Part of a defensive unit that tallied 845 total stops in 2019.

2018 (FRESHMAN): Played in three games for the Razorbacks in 2018 … Totaled 45 snaps during his first season of collegiate football, according to Pro Football Focus, with 42 coming on the defensive line … Recorded one tackle in the season opener against Eastern Illinois, a solo stop.

HIGH SCHOOL: Consensus three-star prospect by ESPN, Rivals and 247Sports as both a strong-side defensive end and defensive tackle …Rated the No. 6 player in the state of Arkansas by ESPN and the No. 59 defensive tackle in the class … 247Sports Composite ranking tabbed him the No. 37 ranked strong-side defensive end and No. 8 player in the state … Coached by Zak Clark at Springdale High School … Produced a staggering 43 tackles for loss his final two seasons … Finalist for the Hooten’s Arkansas Football Class 7A/6A Defensive Player of the Year … Despite being double and triple-teamed as a senior, he finished with 73 tackles, 30.5 tackles for loss, 8.5 sacks and 49 quarterback hurries … As a junior, he totaled 54 tackles, 12.5 tackles for loss and 2.5 sacks … Chose Arkansas over Mississippi State, Missouri, NC State, Kansas State, Iowa State, UCF, Memphis, Louisiana Tech, Kansas, Tulsa and others.