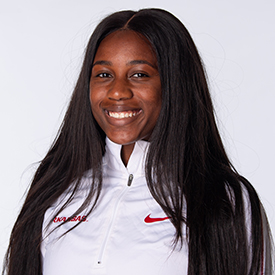 Sophomore (2018)
Competed in eight meets during the indoor season… Set personal-best in the 60-meter hurdles at the Texas Tech Open (8.44), and in the 60-meters at the Tyson Invitational (7.22)… Qualified for the NCAA Indoor Championships in the 60-meters finishing 15th earning Second-Team All-American honors… Competed in nine meets during the outdoor season… Ran a leg on the silver medal 4-x-100-meter relay at the 91st Texas Relays (Mar. 28)… Set a personal-best in the 200-meters running the No. 3 time in program history (23.00) at the LSU Alumni Gold meet… Silver medalist in the 4×100-meter relay at the National Championship Relays (Apr. 28)… Bronze medalist in the 4-x-100-meter relay at the SEC Outdoor Championships recording a school-record time of 43.26… Set the school record in the 100-meters (11.04) at the NCAA West Prelims breaking the 14-year-old record set by Veronica Campbell in 2004… Qualified for the NCAA Outdoor Championships in the 100-meters and as a member of the 4-x-100-meter relay, earning Second-Team All-American honors in the relay and honorable mention All-American honors in the 100-meters…

Freshman (2017)
Outdoor first-team All-American (4-x-100) and NCAA honorable mention (100) … Began her first season with the Razorbacks, capturing the 60-meter title at the Arkansas Invitational in 7.48 … Improved her 60 performance at the Tyson Invitational, clocking a PR of 7.46 to place in the top-10 … Capped the regular season with another win at 60 meters at the Arkansas Qualifier where she also recorded a PR in the 200 of 23.80 … Finished 15th in the 200 at her first SEC championships to close out the indoor season … Ranks ninth and tenth in indoor program history in the 60 and 200, respectively … Made her outdoor debut collecting a pair of top-two finishes in the 100 and the 4-x-100-meter relay at the Arkansas Spring Invitational … Continued with her impressive freshman campaign, posting a PR and program No. 5 all-time best of 11.38 in the 100 at the SEC Relays … Contributed to Arkansas’ SEC outdoor win as a member of the seventh-place finishing 4-x-100-meter relay … Qualified for the NCAA Outdoor Championships in the 100 and the 4-x-100-meter relay … Earned All-America honors off a program record-breaking performance (43.34) with the 4-x100-meter relay team, good for sixth place … Capped her year as the 24th-best short sprinter in the country in the 100.

Personal
Born on Oct. 17, 1997 … Daughter of Danelle and Robin Baylark … Has one sister; Lisa Baylark and two brothers; Dan Baylark and Ronald Brown … Majoring in kinesiology.