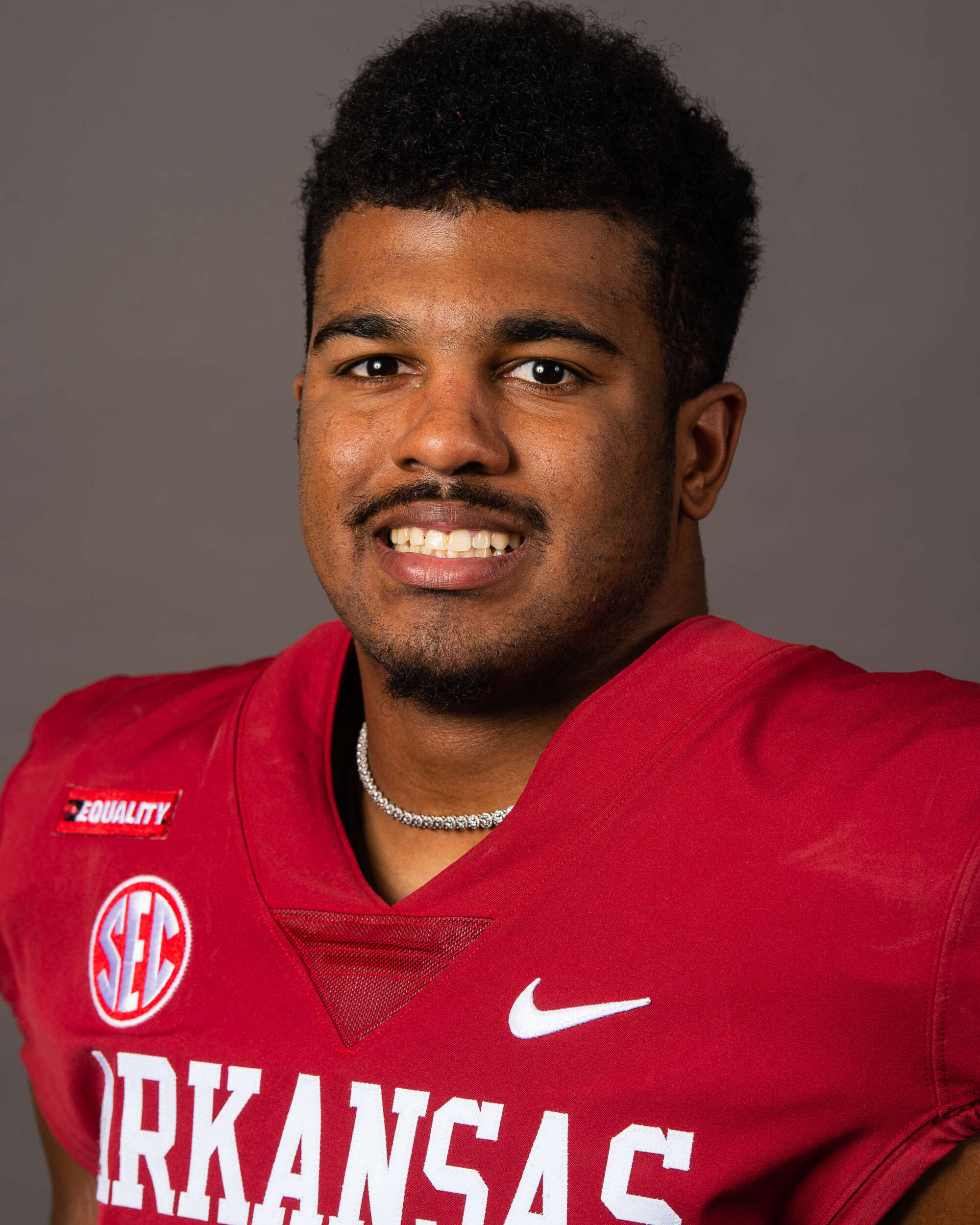 2021 (REDSHIRT SOPHOMORE): Named a Preseason Second-Team All-American by the AP … Earned a spot on the Chuck Bednarik Award watch list … Started in the Hogs’ first six games before being sidelined by a season-ending injury … Finished eighth on the team in total tackles (46) with 1.5 tackles for loss despite playing in only six games … Four pass breakups on the year, tied for third most on the team … Carded double-digit tackles (11), including a tackle for loss, and a career-high two interceptions in the season opener against Rice (Sept. 4) … Recorded eight total tackles and a pass deflection against Texas (Sept. 11) … Made nine tackles and registered two pass breakups against Georgia Southern (Sept. 18) … Finished with two total tackles against Texas A&M (Sept. 25) … Notched seven tackles at Georgia (Oct. 2) … Accumulated nine tackles, 0.5 tackles for a loss and a pass breakup at Ole Miss (Oct. 9).

2020 (REDSHIRT FRESHMAN): Tabbed to the All-SEC First Team by the AP and Second Team by the coaches … First Razorback defensive back to earn All-SEC honors from the league’s coaches since Michael Grant (2007) … Named a FWAA Freshman All-American, the first Razorback since Dre Greenlaw (2015) … Garnered Phil Steele Third Team All-American recognition … Selected to The Athletic’s Freshman All-American Team … Played in all 10 games and started nine at strong safety … Logged 99 total tackles (51 solo), 2.0 tackles for loss, three interceptions, four passes broken up, one fumble recovery and two forced fumbles … Led the team in solo tackles, tied for the lead in interceptions and ranked third in total tackles … Averaged 9.9 tackles per game, ranking tied for the FBS freshman lead and fourth among all SEC defenders … Only FBS freshman to post 95+ tackles and at least three interceptions during the regular season … First SEC freshman since Tennessee’s Eric Berry (2007) to post at least 86 tackles with three picks … First SEC freshman since 2012 to record 70+ tackles with three or more interceptions … Finished third on the team with nine tackles while also forcing a fumble in his first career start against Georgia (Sept. 26) … Logged 13 tackles in the win at Mississippi State (Oct. 3) … Led the team making 14 tackles at No. 13 Auburn (Oct. 10) … Recorded his first career interception, returning it 35 yards for a touchdown, and also registered nine tackles and a forced fumble in the win over Ole Miss (Oct. 17) … First SEC player to log at least nine tackles with an interception return for a touchdown and a forced fumble since at least 2000 … Limited to one tackle and left the game after being penalized for targeting at Texas A&M (Oct. 31) … Named SEC Defensive Player of the Week for his 12 tackles, one interception and one forced fumble in the win over Tennessee (Nov. 7) … Also named Jim Thorpe Award Player of the Week for his performance against Tennessee … Made 12 tackles and recorded an interception for the second straight game and broke up a career-high two passes at No. 6 Florida (Nov. 14) … Became the first Razorback to intercept a pass in back-to-back games since at least 1997 … Made a career-high 16 tackles against LSU (Nov. 21), recording his third straight 10+ tackle game (Tennessee, Florida, LSU) … Posted three tackles against Missouri (Dec. 5) … Recorded his sixth 10+ tackle game of the season, making 10 stops against No. 1 Alabama (Dec. 12) … Totaled five games of 12 or more tackles, ranking second nationally behind teammate Grant Morgan … According to Pro Football Focus, saw action in 712 defensive and 92 special teams snaps … Turned in a season defensive grade of 79.4 and an 80.7 coverage grade.

2019 (FRESHMAN): Played in four games as a true freshman for the Razorbacks in 2019 … Appeared in games against Ole Miss (Sept. 7), San Jose State (Sept. 21), Kentucky (Oct. 12) and Western Kentucky (Nov. 9) … Saw action on 33 defensive snaps and 14 special teams plays over the course of the season, with a majority of time on defense against WKU in the home finale … Tallied 29 snaps against the Hilltoppers, 10 in coverage, recording six tackles, three solo, with a PBU and a forced fumble … Finished the year with an overall defensive grade of 85.3 from Pro Football Focus, with a mark of 75.5 in coverage.

HIGH SCHOOL: Four-star prospect by Rivals, 247Sports and ESPN … Ranked No. 20 in the nation at the safety position by Rivals … Rated 29th overall in the state of Texas according to 247Sports … Four-year varsity letterwinner at Mansfield Legacy High School in Mansfield, Texas … Also lettered in basketball and baseball … Played in one game as a senior before an injury forced him to miss the rest of the season … A key member on both sides of the ball for the Broncos in 2017, starting at safety and quarterback for Legacy HS as a junior … Racked up 101 tackles, including 70 solo, with six for loss … Also had three interceptions, six forced fumbles and six fumble recoveries on the defensive side of the field … Passed the 1,000-yard threshold both through the air and on the ground at the helm of the Bronco offense, throwing for 1,122 yards and 15 touchdowns while rushing for 1,064 yards and 13 scores … Led Legacy to the 2017 Texas High School Football Class 5A-II state semifinals and a 12-3 overall record … Earned four 2017 Defensive Player of the Year honors from SportsDay, The Fort Worth Star Telegram, Associated Press and District 10-5A … Credited with 183 total tackles, 139 solo, as a sophomore in 2016, posting seven for loss with nine interceptions, three forced fumbles and one fumble recovery … Joins Mansfield Legacy teammates Taurean Carter and Enoch Jackson Jr., who signed with the Razorbacks in December … CHOSE ARKANSAS OVER: Alabama, Florida, Missouri, Oklahoma, Ohio State, TCU, Texas, Texas Tech, Wisconsin and others.

PERSONAL: Born March 15, 2001 … Son of Phyllis and Sherman Catalon … Brother Kendall Catalon is a wide receiver for the Razorbacks.