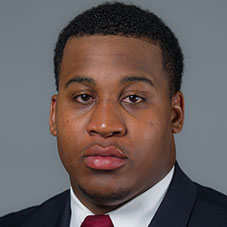 Career (2015-16)
In two seasons, compiled 104 tackles, including 15.0 for loss and 7.5 sacks … Started 25 of 26 games played … Took over as a starter on the defensive line in the second game of the 2015 season and never relinquished that role … Played defensive end in all 13 games during his junior season … Moved inside to defensive tackle for the first eight games of the 2016 season, before returning to defensive end for the final four contests … Totaled at least one-half sack in eight games … Recorded at least one tackle in 25 of 26 contests.

Started all 13 games … Team leader in sacks (5.5) and tackles for loss (7.5) … Tied for third on the team and first among defensive linemen in tackles (49) … Broke up two passes and forced one fumble … Registered at least one-half sack in six games, including each of the first three … Had at least one tackle in all but one contest … Collected 17 tackles, including 2.5 for loss, and 2.5 sacks through the first three games … vs. Louisiana Tech (Sept. 3): Combined for a 10-yard sack with fellow defensive lineman Deatrich Wise Jr., to force a punt that allowed Arkansas to run out the clock for the win … at No. 15 TCU (Sept. 10): Halted the Horned Frogs’ first drive of the game deep in Arkansas territory with a forced fumble … Made a third-down tackle to force a punt in the second quarter … On the next drive, teamed with Randy Ramsey for a sack and a loss of 9 yards … Finished with a season-high seven tackles, including four in the first half … vs. Texas State (Sept. 17): Helped limit the Bobcats to just 22 yards rushing and 105 total yards … Logged a career-high 1.5 sacks … Tallied four tackles, including three of the solo variety … Broke up a career-high two passes … Made a solo stop for no gain on third-and-one late in the first quarter … Sacked the quarterback for a 10-yard loss on first-and-10 in the second quarter … Made another solo stop for no gain on the next play … Two drives later, broke up a third-down pass to to force a punt … Teamed with JaMichael Winston for and a loss of 10 yards on third-and-seven during Texas State’s first drive of the third quarter … vs. No. 12 Ole Miss (Oct. 15): Sacked Ole Miss quarterback Chad Kelly for a loss of 8 yards with 1:50 to go in the fourth quarter … Finished with five tackles, including 1.5 for loss … vs. No. 11 Florida (Nov. 5): Recorded four tackles with 1.0 for loss and one-half sack … Helped hold the Gators to 12 yards rushing and just one first down on the ground … Added a quarterback hurry on third down to force a field goal attempt in the fourth quarter … vs. No. 22 Virginia Tech (Dec. 29): Equaled career highs in tackles for loss (2.5) and sacks (1.5) … Finished with six tackles, including three solo stops.

Junior (2015)
Played in all 13 games with 12 starts … Took over as a starter on the defensive line in the second game of the season and never relinquished that role … Tied for fourth on the team in tackles with 55 … Ranked fourth on the team in tackles for loss with 7.5 and tied for third in sacks with 2.0 … Made at least 0.5 tackles behind the line of scrimmage in seven contests … Credited with four or more tackles in 8 of 13 games … vs. UTEP (Sept. 5): Led the team with a career-high eight tackles, including 0.5 for loss in his debut … vs. Auburn (Oct. 24): Recorded six tackles, a season-high total in league play … Collected 2.5 tackles for loss, which tied for the most by a Razorback in a game during the season … Notched a sack for a 9-yard loss to force a punt late in the third quarter.

Sophomore at Hutchinson CC (2014)
An early enrollee who earned a four-star rating from Rivals, ESPN and Scout … Ranked No. 15 in Rivals’ Top JUCO 100 and the No. 1 strong side defensive end … ESPN rated him No. 32 in the ESPN JC50 and the No. 4 junior college defensive tackle in the country … Coached by Rion Rhoades … Enrolled early and will participate in team activities during the spring semester … Chose Arkansas over Florida, Georgia, Miami, Oklahoma State and others … Finished his junior college career with 144 total tackles and 22.5 career sacks … His 22.5 career sacks ranks second in Blue Dragons history … Posted 15.5 sacks, the second-highest single-season total in school history … Earned second-team NJCAA All-American honors and first-team all-conference recognition … Totaled 78 tackles, including 24.5 for loss … Also posted seven quarterback hurries, two fumble recoveries and blocked two kicks … vs. Hudson Valley CC (Dec. 6): Earned defensive MVP honors in the 2014 Salt City Bowl with 10 total tackles and three sacks.

Redshirt Freshman at Hutchinson CC (2013)
Helped lead the Blue Dragons to an 8-4 record, a second-place finish in the Jayhawk Conference and a victory in the Salt City Bowl … Earned first team all-conference honors at defensive end … Finished second on the team with 73 tackles … Also added 13.0 tackles for loss, seven sacks and 13 quarterback hurries.

Personal
Born on June 2, 1994 … Son of Weldon and Sharon Ledbetter … Graduated in December 2016 with a bachelor’s degree in sociology … Father, Weldon, played running back at Oklahoma from 1979-82 and was selected in the seventh round of the 1983 NFL Draft by the Tampa Bay Buccaneers … Cousin, Isaac Byrd, played wide receiver at Kansas and was a sixth round selection by the Tennessee Titans in the 1997 NFL Draft.