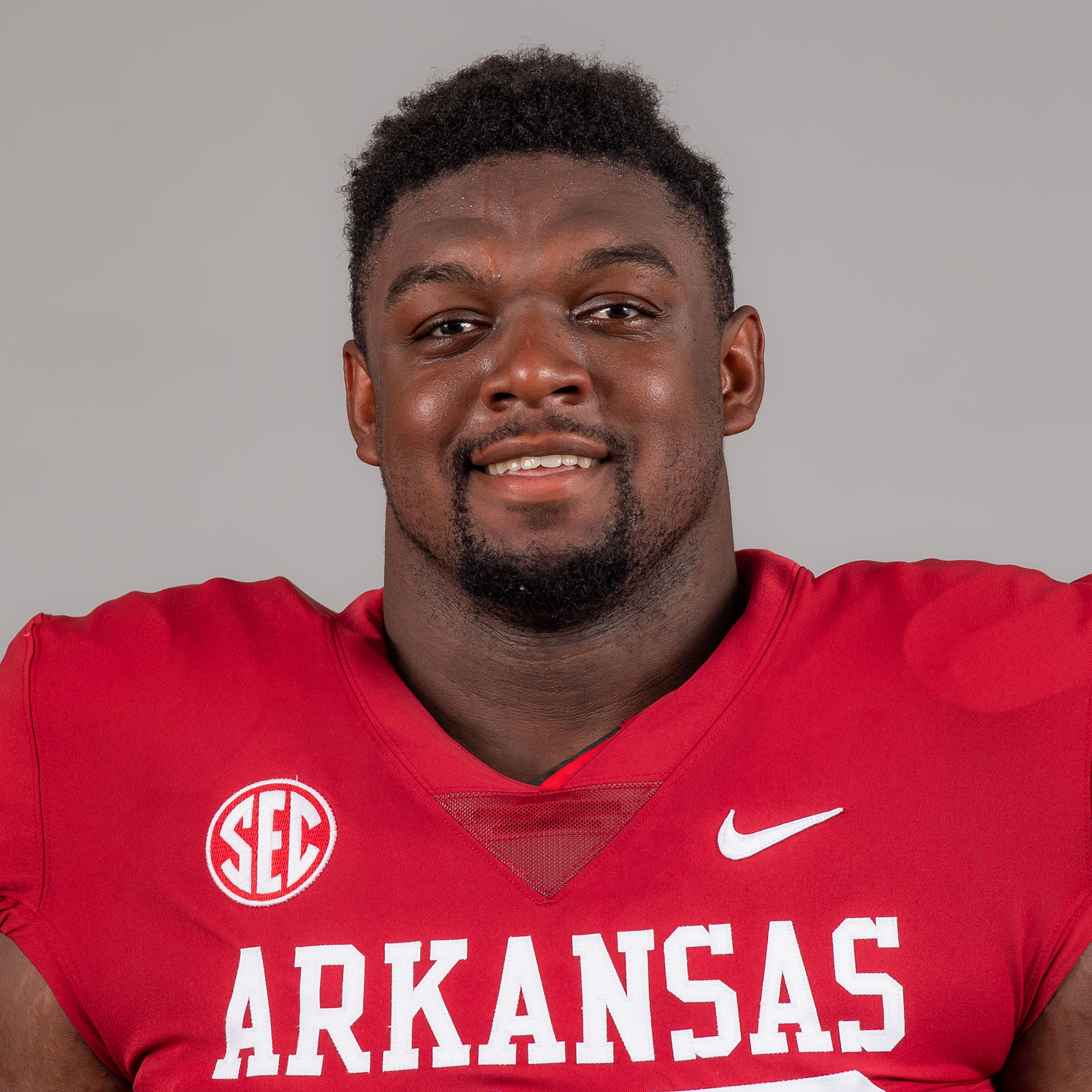 2020 (REDSHIRT SENIOR): Started all 10 games for the Razorbacks on the defensive line … Made 35 tackles, including 6.5 tackles for loss for the second-most on the team … Led the Hogs with four quarterback hurries and registered a team-high 29 QB pressures according to PFF … Made a season-best six tackles at Auburn, including four solo tackles and a sack … Registered five tackles in win over Ole Miss and made a tackle for loss for second straight game … Extended streak to three straight games with a tackle for loss at Texas A&M as part of a three-stop night … Of his four tackles in victory vs. Tennessee one was a tackle for loss to make it four straight games with a TFL … Picked up a season-high 1.5 TFLs at Florida to extend streak to five games … Made it six straight games with a TFL against LSU to go with his four tackles … Forced a fumble and made four tackles against top-ranked Alabama in season finale.

2019 (REDSHIRT JUNIOR): Played in all 12 games for the Razorbacks as a junior in 2019 … Participated in 330 snaps over the course of the year, according to Pro Football Focus, with 311 on the defensive line … Recorded 17 tackles, eight solo, including 4.5 for loss with half-a-sack against Missouri in the season finale … Ranked sixth on the team in TFLs … Also notched three pass breakups and forced a fumble at Kentucky on Oct. 12 … Posted stops in each of the first four games, with two against Ole Miss and Colorado State … Had three more games with at least two, another back-to-back stretch at Alabama and vs. Mississippi State, while notching a season-best three in the final game of the year against Missouri … Earned a 77.3 overall grade from PFF, with a 78.0 in QB pressure and 76.6 in run defense from the outlet.

2018 (REDSHIRT SOPHOMORE): Played in 11 of 12 games for the Razorbacks during his sophomore season … Totaled 363 snaps over the course of the year, according to Pro Football Focus, including 286 on the defensive line and 77 on special teams … Recorded 14 total tackles, four solo … Posted a tackle in each of the first two games of the year, before tallying two against Texas A&M on Sept. 29 … Put together three more multi-tackle performances against Tulsa (three), LSU (two) and Mississippi State (three) … Earned tackling grades from PFF of 70.0 or higher in four games, including a season-high 73.5 vs. the Golden Hurricane … Notched his best overall defensive grade of the year three weeks later against the Tigers, topping out at 73.1 with run defense and tackling marks of 73.9 and 70.2, respectively … Part of a defensive crew that racked up 882 total tackles over the course of the 2018 campaign.

2017 (REDSHIRT FRESHMAN): Added depth to the defensive line seeing action in all 12 games and playing 160 snaps … Finished with six tackles, including 0.5 for loss, and a pair of quarterback hurries.

HIGH SCHOOL: A consensus three-star recruit by ESPN, Rivals, Scout and 247Sports … Ranked as the No. 17 strong-side defensive end in the country and the No. 374 overall recruit by 247Sports … Top 50 player in the state of Texas by 247Sports and No. 77 by ESPN … Rated as the No. 57 defensive end by ESPN and No. 59 by Scout … Labeled the No. 11 defensive end in the state of Texas by Scout … Finished with a three-star rating as the No. 30 strong-side defensive end in the nation No. 93 ranking in the state of Texas by 247Composite, a combined index of national recruiting rankings … Earned 4A All-State second team honors from Texas Associated Press Sports Editors as a senior in 2015 under the guidance of head coach Chip Keel … Also named the District 8-4A Division II Defensive MVP … Produced 71 tackles, 21 tackles for loss and 10 sacks as a junior … Named to the 8-4A All-District second team in 2014 … Earned District 22-3A Newcomer of the Year as a sophomore after 22 of his 39 tackles went for a loss, highlighted by five sacks … Four-year letterwinner in basketball at Shepherd under head coach Jeremy Bennett … Earned 23-4A All-District second team honors as a junior … Scored over 1,100 points and grabbed more than 800 rebounds in his career … Has collected 28 career double-doubles … Qualified for regionals in the shot put … Chose Arkansas over Oklahoma State, TCU, Nebraska and others.

PERSONAL: Born on Sept. 16, 1997 … Son of John and Wynee Marshall … Cousin, Cedric Reed, played at Texas and is currently with the Buffalo Bills … Relative, Cedric Hardman, was the ninth overall pick of the 1970 NFL Draft by the San Francisco 49ers and is currently the franchise’s all-time leader with 112.5 sacks … Recreation and sport management major.