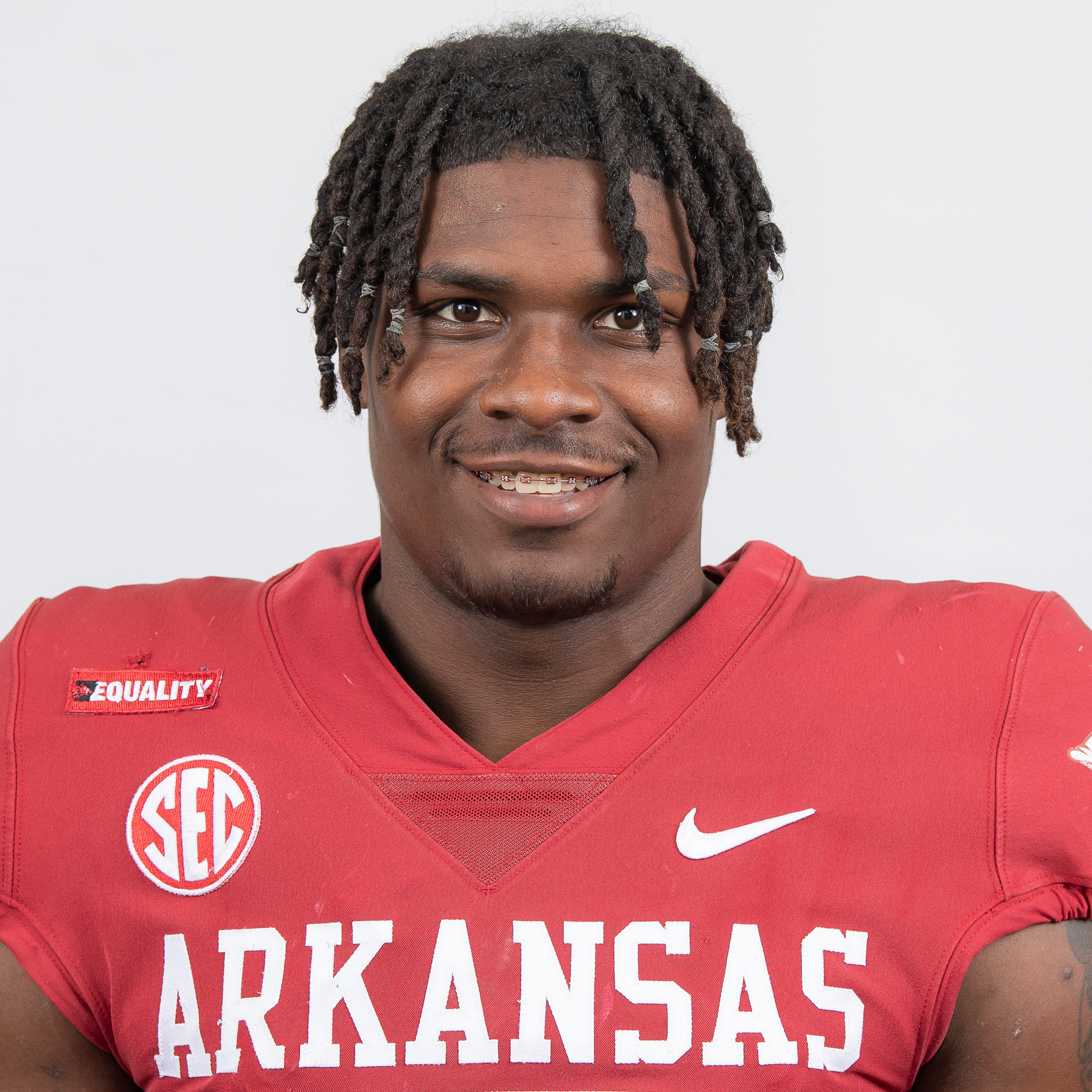 2020 SEC Co-Defensive Player of the Week

2020 (JUNIOR): Played all 10 games and started the final eight of the year at boundary safety … Finished fourth on the team in tackles, making 60 total stops (18 solo) with 3.0 tackles for loss, 1.0 sack, two interceptions, three passes broken up, one fumble recovery and one forced fumble … Named SEC co-Player of the Week alongside teammate Bumper Pool for his two interception game in Arkansas’ win at Mississippi State (Oct. 3) … Also had 0.5 tackles for loss against the Bulldogs and two total tackles … His two interceptions against Mississippi State set career-high and the first two interception game with at least 0.5 tackles for loss by a Razorback since Michael Grant in 2006 against Louisiana-Monroe … First Hog to pick off two passes in a game since Dre Greenlaw in 2018 against Texas A&M … Posted five tackles at Auburn (Oct. 10) … Recorded only double-digit tackle performance of the year with a season-high 10 takedowns in the win over Ole Miss (Oct. 17) … Wrapped up four tackles with his first pass broken up of the year at Texas A&M (Oct. 31) … Registered first career sack in the win over Tennessee (Nov. 7) and made eight tackles … Made nine tackles, his second-most on the year, with 0.5 tackles for loss at Florida (Nov. 14) … Forced his first career fumble and made eight stops against LSU (Nov. 21) … Tied a career-high with two passes broken up and made a season-high four solo tackles with five total stops at Missouri (Dec. 5) … Recorded a fumble recovery and six tackles in the season finale against Alabama (Dec. 12) … Registered two or more tackles in all 10 games … According to Pro Football Focus, saw action in 633 defensive snaps, tied for the fourth-most on the team and posted a defensive grade of 64.0 … Posted a single-game defensive grade high of 74.9 at Mississippi State.

2019 (SOPHOMORE): Started all 12 games for the Razorbacks in 2019 at free safety … Participated in 853 plays as a sophomore at Arkansas, according to Pro Football Focus, seeing time in both defensive coverages and special teams units … Finished third on the team in total tackles with 87, including 44 solo stops … Recorded an interception, recovered a fumble, broke up four passes, credited with a quarterback hurry and earned one tackle for loss … Hauled in his first interception of his career to seal Arkansas’ 20-13 win over Portland State in the season opener on Aug. 30 … Tallied seven tackles, six solo, at Ole Miss on Sept. 7, for a then-career-high total … Recovered a fumble in the third quarter against the Rebels … Posted six stops in two of the next three games, doing so against Colorado State (Sept. 14) and Texas A&M (Sept. 28) … Put together his first double-digit tackle performance, notching 11 at Kentucky on Oct. 12 with eight solo tackles … After eight stops against Auburn (Oct. 19), set another personal-best at Alabama (Oct. 26) with 13 tackles, including a career-high nine solo stops … Finished the year with eight performances of at least five tackles, with nine against Mississippi State (Nov. 2), wrapping up the season finale with 12 total stops … All three of his double-digit tackle games came against SEC opponents … Posted PFF grades over 84.0 in three games, including a mark of 89.3 against Alabama.

2018 (FRESHMAN): Played in nine games for the Razorbacks in 2018, starting in the season finale at Missouri in the free safety slot … Totaled 192 snaps played over the course of his freshman campaign, with 141 coming on defense and 51 on special teams, according to Pro Football Focus … Recorded 11 total tackles, six solo … Opened the season with two stops against Eastern Illinois (Sept. 1), then had one against North Texas (Sept. 15) and Tulsa (Oct. 20) before a season-high of four at Mississippi State (Nov. 17) and three to end the year at Missouri (Nov. 23) … Posted his best overall defensive grade of the year against Eastern Illinois with a mark of 78.9 … Had his top coverage grade come in that contest vs. the Panthers at 82.5 (PFF) … Put together his top tackling mark at Mississippi State at 78.9, while earning his top run defense grade at 72.6 the following week at Missouri … Part of a defensive crew that racked up 882 total tackles over the course of the 2018 campaign.

HIGH SCHOOL: Consensus three-star recruit by 247Sports, ESPN and Rivals … Listed as the No. 548 ranked overall player in the nation, No. 21 ranked player in Louisiana and No. 43 safety according to 247Sports … Considered the No. 18 player in Louisiana and No. 33 safety by Rivals … Named to the 2017 LSWA AllState Class 4A Football Team as a senior … Had 68 tackles, five interceptions, six forced fumbles, four fumble recoveries and 15 pass breakups … As a junior, had 59 tackles, six interceptions, four forced fumbles, two fumble recoveries and scored five touchdowns in 2016 as a tremendous weapon in the kick return game as well … Coached by Wayne Reese … CHOSE ARKANSAS OVER: Alabama, Auburn, Texas A&M, LSU, Tennessee, Mississippi State, Ole Miss, Vanderbilt, Texas, Florida State, Michigan, TCU, Baylor, Oregon, Virginia Tech, Arizona and others.