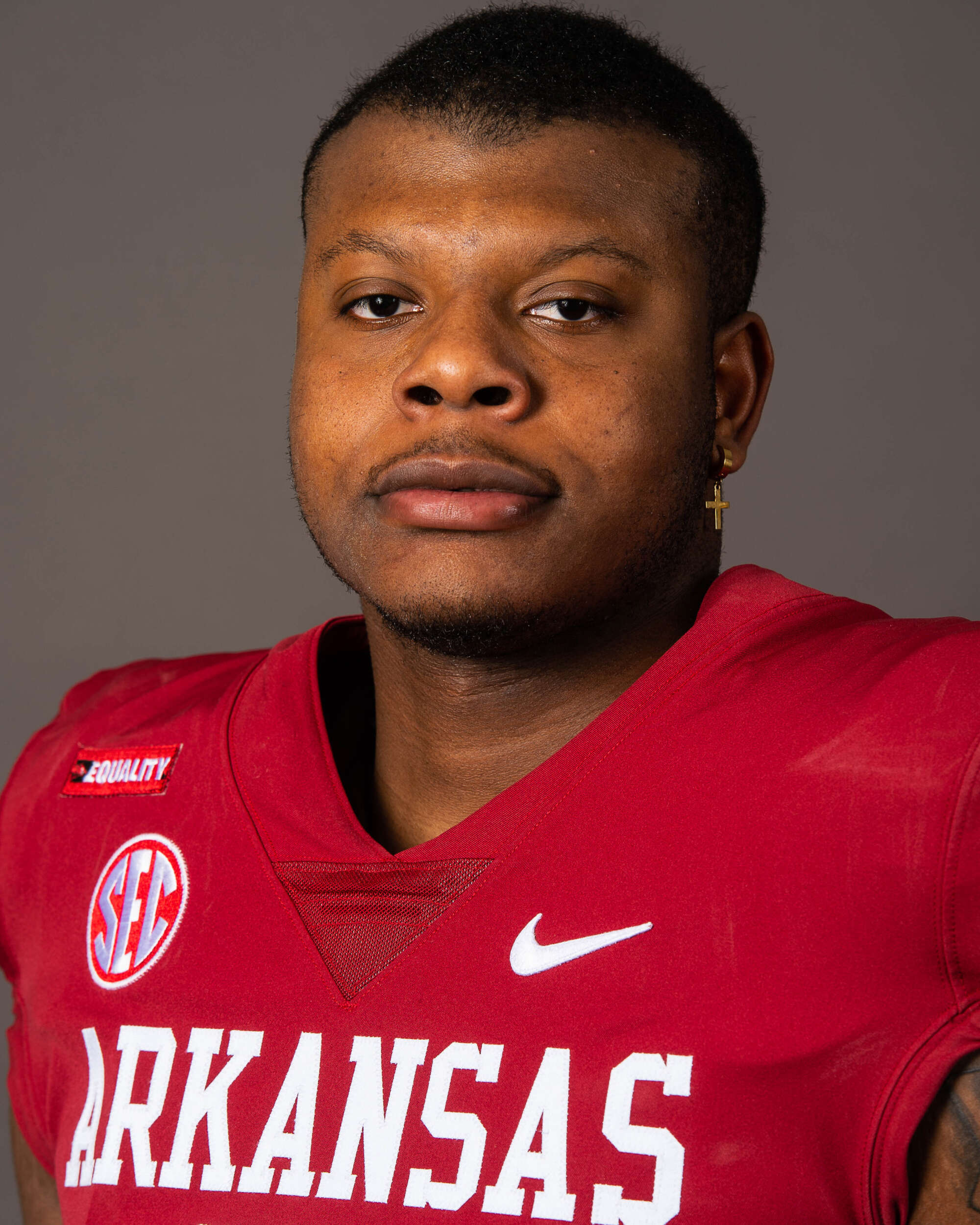 2021 (REDSHIRT SOPHOMORE): Started all 13 games at quarterback, completing 198-of-294 (67.3%) passes for 2,676 yards and 21 touchdowns … Rushed for a team-leading 664 yards on 146 carries (4.5 ypc) with six scores on the ground … His 2,676 passing yards rank ninth most in a single season in program history … Wrote his name in the Arkansas record book in numerous places: season completions (198 – 8th), game completion percentage minimum 20 passes (.826 – 3rd), season completion percentage (.673 – 2nd), season passing yards (2,676 – 7th), game touchdown passes (4 – T8th), season TD passes (21 – 7th) … Finished the year third in the SEC in average yards per completion (13.5) and in yards per pass attempt (9.1), ranking fourth in the league and 10th among all FBS quarterbacks in passing efficiency (164.7) … Also ranked fourth in the league in completion percentage (67.3%), the second-best mark in a single season in Arkansas history … Owns the highest single-season completion percentage in school history when attempting at least 250 passes … Finished sixth in the SEC in total offense, generating 256.9 total yards of offense per game … Finished the season as one of five FBS quarterbacks to total 20 or more touchdown passes with four or fewer interceptions … One of eight FBS quarterbacks with 2,500+ passing yards, 20+ passing touchdowns, 500+ rushing yards and 5+ rushing scores on the season … Totaled three games with 300+ passing yards and at least three touchdown passes, becoming the first Arkansas signal-caller to do so since Brandon Allen in 2015 … His three 300+ yard passing games were the most for an Arkansas QB since Austin Allen produced four in 2016 … First Razorback quarterback to have multiple games with at least two rushing touchdowns in the same season since 1997 … Threw only four interceptions on the year and completed 171 consecutive passes without an interception, the second-longest streak in program history … Totaled 89 yards on the ground with two rushing touchdowns in the season opener against Rice (Sept. 4), also threw for 128 yards and a touchdown on 12-of-21 (57.1%) passing … First Arkansas player to run for at least two touchdowns and throw for a touchdown in a game since Rawleigh Williams did so against Mississippi State in 2014 … Broke out for a career-high 366 passing yards and three touchdowns on 13 completions against Georgia Southern (Sept. 18), becoming only the fifth FBS quarterback since 2000 to throw for over 365 yards on 13 or fewer completions … Hooked up with WR Treylon Burks for a 91-yard touchdown against Georgia Southern, the second longest touchdown pass in school history … Completed 25-of-35 (71.4%) passes for 336 yards and three touchdowns while rushing for 85 yards and three scores in an epic performance at Ole Miss (Oct. 9) accounting for six touchdowns (3 passing, 3 rushing), the second most in program history … Became one of only six SEC signal-callers since 2000 to have thrown for 3+ touchdowns and rushed for 3+ scores in a game, joining Texas A&M QB Johnny Manziel, Mississippi State QB Dak Prescott, Ole Miss QB Chad Kelly, LSU QB Joe Burrow and Ole Miss QB Matt Corral … Threw for a career-best four touchdowns against UAPB (Oct. 23), completing a career-high 82.6% of his passes (19-of-23), the third-highest single-game completion percentage in school history (minimum of 20 attempts), for 191 yards and a touchdown against Mississippi State (Nov. 6) … Connected on 14-of-19 (73.7%) passes for 98 yards against Penn State (Jan. 1) in the Outback Bowl with a career-best 110 yards rushing and a touchdown on 20 carries, becoming the first Arkansas quarterback to rush for over 100 yards in a game since Matt Jones totaled 126 yards on the ground against Ole Miss in 2004 … Earned Outback Bowl MVP honors for his performance, leading Arkansas to its first bowl game win since the 2016 Liberty Bowl and its first New Year’s Day bowl game win since the 2000 Cotton Bowl … Helped power the Razorbacks to a nine-win season, their most wins in a year since 2011 (10 wins).

2020 (REDSHIRT FRESHMAN): Played in five games, making one start … Completed 20-of-41 (48.8%) passes for 295 yards and three touchdowns … Rushed 28 times for 67 yards (2.4 ypc) and scored two touchdowns … Saw first action of the season in the second half of the season opener against Georgia (Sept. 26), playing nine snaps and completing 1-of-2 passes for three yards and rushing for 16 yards … Played two snaps at Mississippi State (Oct. 3) rushing twice … Scored first rushing touchdown of the season on a 12-yard run in the fourth quarter at Florida (Nov. 14), seeing action in nine snaps … Made his first start of the year and set multiple career marks, completing 18-of-33 passes for 274 yards with three touchdowns and also ran 13 times for 32 yards and a touchdown at Missouri (Dec. 5) … Completed his first career touchdown pass in the first quarter, a 2-yard completion to tight end Blake Kern … Hooked up with wide receiver Treylon Burks for a 68-yard touchdown pass, the longest throw of his career … Registered the most passing yards by a Razorback freshman quarterback since 2008 … Became the first Arkansas quarterback since 2010 to throw for at least 270 yards and three touchdowns while also rushing for a score … First Razorback quarterback to throw for two or more touchdowns and rush for a score in SEC play since 2017 … Engineered an offense that posted 566 total yards, Arkansas’ highest total since 2016 … Played a career-high 87 snaps … Played 21 snaps coming off the bench in the season finale against Alabama (Dec. 12), completing 1-of-6 passes for 18 yards and rushing six times for 11 yards … According to Pro Football Focus, played 128 snaps and received a 57.1 passing grade.

2019 (FRESHMAN): Played in three games, starting one, as a true freshman for the Razorbacks in 2019 … Appeared in games against Mississippi State (Nov. 2) and Western Kentucky (Nov. 9), before making his first collegiate start at LSU on Nov. 23 … Made his debut against the Bulldogs and immediately made his presence known, rushing for 21 yards on his first snap … After a 32-yard pass to Treylon Burks, Jefferson completed his first collegiate drive (four plays, 75 yards) with a five-yard touchdown run … Saw 40 snaps against WKU, throwing for 60 yards on 6-of-15 passing, while rushing for 32 yards on 16 carries, scoring on a two-yard run … Started against the top-ranked Tigers, going 7-of-14 for 105 yards passing in Baton Rouge … First 100-yard passing game by an Arkansas QB since Oct. 19 against Auburn.

HIGH SCHOOL: Four-star prospect by Rivals, 247Sports and ESPN … Rated as the fourth-ranked dual-threat quarterback in the country by 247Sports … Slotted as the 12th overall player in the state of Mississippi by Rivals … Placed in the Rivals Top 250 at No. 248 … Four-year varsity letterwinner in football and basketball at North Panola High School in Sardis, Mississippi … Helped the Cougars to the Mississippi state 3A semifinals, finishing the 2018 campaign with a 12-2 overall record … Racked up 3,180 yards through the air on 166 of 275 passing in 14 games for a .604 completion percentage … Averaged 227.1 yards per game, 19.2 per reception, with 37 passing touchdowns … Second on the team in rushing by 40 yards, carrying the ball 115 times for 916 yards and seven touchdowns … Played in the 2018 Alabama vs. Mississippi All-Star Game on Dec. 17 and set to play for USA Football in the 2019 International Bowl … Back-to-back years throwing for 3,000+ yards, also doing so in 2017 … Totaled 3,028 yards on 150 of 236 passing as the starting QB for the Cougars as a junior … Tossed 36 touchdowns and three interceptions for a .636 completion percentage, averaging 216.3 yards per game … Had a career year on the ground, rushing for 1,325 yards on 139 carries, scoring eight times with six games over 100 yards rushing … Dropped the state semifinal game, completing 2017 with a 13-1 mark … Completed his high school career with 40 wins, 9,582 passing yards, 2,922 rushing yards and 143 total touchdowns, including 119 passing … CHOSE ARKANSAS OVER: Georgia, Kentucky, Mississippi State, Missouri, Ole Miss, Texas A&M, Vanderbilt, Baylor and others.