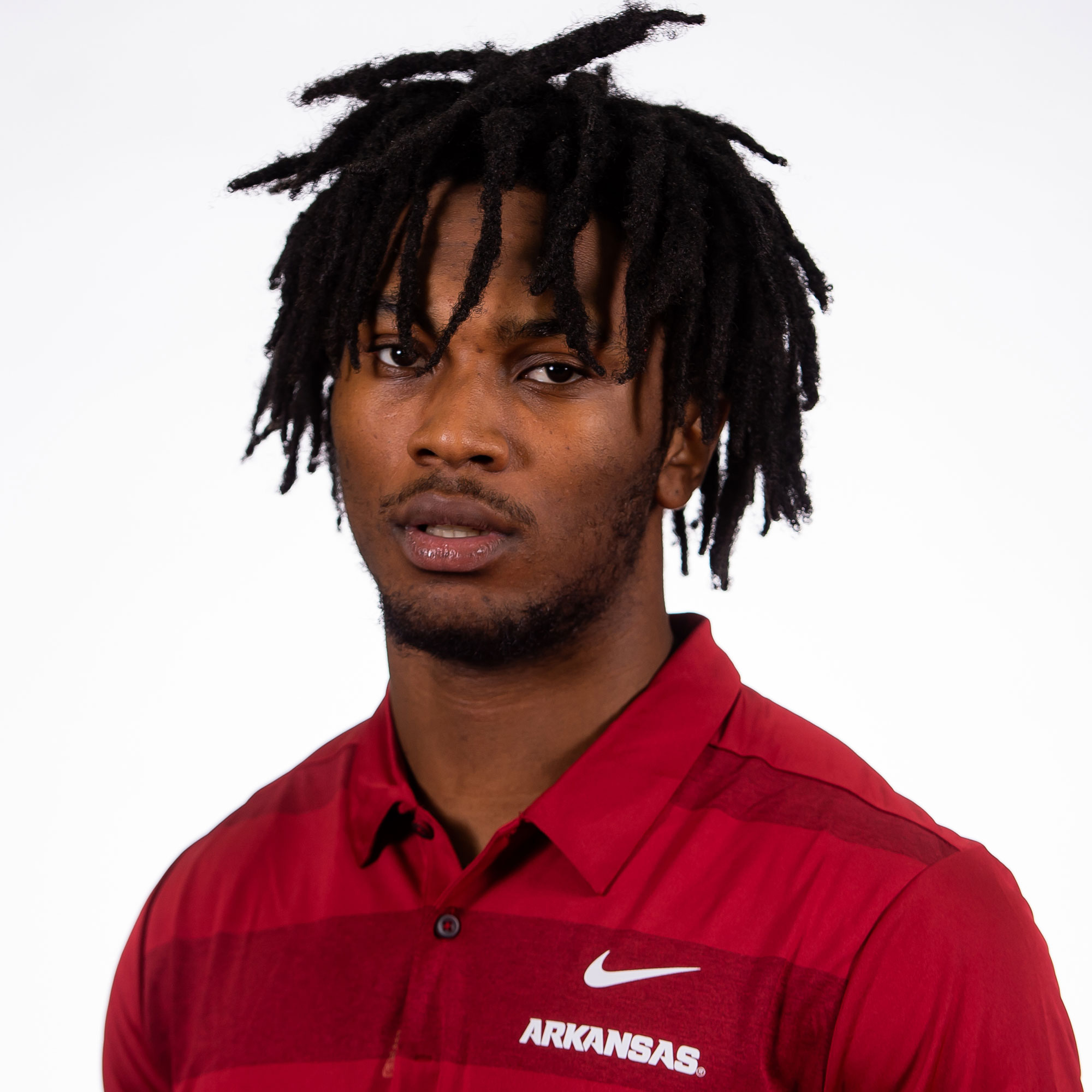 2019 (JUNIOR): Preseason All-SEC Third Team (Coaches) … Started all 11 games he played at strong safety, missing the final game of the 2019 season … Totaled 789 snaps over the course of the year, with 682 coming on defense – the third most of any Razorback in 2019 … Finished fourth on the team with 76 total tackles, 46 solo, which were the second-most by a Razorback … Racked up 4.0 tackles for loss, including two sacks, with two pass breakups … Also tallied two interceptions, two fumble recoveries and two forced fumbles … Was the first player in the NCAA in 2019 to record a sack, an interception and score a touchdown on a fumble recovery, accomplishing the feat over the first two weeks of the season … Recorded double-digit tackle games twice in 2019: 12 vs. Texas A&M (career-high) and 11 against Western Kentucky … Posted his first career interception in the season opener vs. Portland State … Also had the first two sacks of his career against the Vikings, making him the first Razorback with a sack & INT in the same game since Alonzo Highsmith against South Carolina in 2011 … Earned Pro Football Focus (PFF) SEC Team of the Week honors for his game against Portland State … Forced & recovered a fumble at Ole Miss on Sept. 7, returning it 69 yards for a touchdown, making it the first fumble recovery TD by a Razorback since Briston Guidry in the 2018 season opener against Eastern Illinois … Part of an eight-tackle game against the Rebels, posting an overall grade of 88.5 in the game from PFF, with a 90.4 in coverage … Tallied a then-career-best nine tackles the next week against Colorado State, posting his top tackling grade from PFF at 84.9 … One of four tackling marks of 82.0 or higher in 2019 … Notched his second INT of the season against San Jose State during the first quarter … Broke his previous tackling record with a 12-stop performance against Texas A&M in Arlington on Sept. 28 … Only player in double-digit figures with 11 tackles against WKU on Nov. 9, including 1.5 TFLs, his most outside of the two-sack day vs. PSU … Forced and recovered a fumble for the second time in 2019 at LSU on Nov. 23 … Secured a coverage grade of 90.1 against the Tigers from PFF, putting together a defensive mark of 88.1 in the game … Rounded out the year at 89.6 in coverage overall and 87.6 as his final defensive grade from the outlet.

2018 (SOPHOMORE): Started all 11 games he played in for the Razorbacks in 2018 at strong safety, missing the season finale at Missouri … Totaled 722 snaps on defense, according to Pro Football Focus, with 362 coming in run defensive schemes … Tallied 70 or more plays in four games, including a season-high 76 against Texas A&M in Arlington on Sept. 29 … Finished fourth on the team in tackles with 53, including 27 solo … Broke up five passes, while also forcing a fumble against North Texas and was credited with a quarterback hurry … Recorded at least three tackles in every game played, with five or more tackles coming in six contests … Racked up a season-high nine stops at Auburn on Sept. 22, including four solo tackles … Also posted five tackles against North Texas (Sept. 15), Alabama (Oct. 6), Ole Miss (Oct. 13) and LSU (Nov. 10), as well as a seven-spot against Vanderbilt on Oct. 27 … Opened the year with an overall grade of 70.0 against Eastern Illinois, with a 78.8 tackling mark (PFF) … Put together his best defensive grade of 73.7 against North Texas, as his high-spot came in coverage at 74.6 … His top tackling marks came against the Aggies at AT&T Stadium, sitting at 81.9, while also piecing together a 78.8 grade in the category against Tulsa on Homecoming … Finished out the year with a 70.5 overall defensive mark … Helped Arkansas to a total of 882 tackles on the season and 15 forced fumbles as a unit.

2017 (FRESHMAN): Started 11 of 12 games at cornerback … Stepped into the starting role when junior Ryan Pulley went down with an injury in the season opener … Played the second-most snaps among all SEC true freshman cornerbacks (690) … Finished sixth on the team and tied for fourth among SEC freshmen in tackles (46) and tied for the team lead in pass breakups (8) … His eight pass breakups were the most by an Arkansas freshman since 2001 when Lawrence Richardson led the team with 17 … Broke up at least one pass in six games … His 46 tackles were the most by a Razorback freshman defensive back since 2012 … One of 10 players, including two true freshmen, to finish the season with 45+ tackles and eight pass breakups … vs. Texas A&M (Sept. 23): Logged a season-high eight tackles … at South Carolina (Oct. 7): Broke up a season-high three passes and finished with two tackles.

HIGH SCHOOL: Consensus three-star prospect by ESPN, Rivals, Scout and 247Sports … Top 10 player in the state of Oklahoma by ESPN, Rivals and 247Sports … Tabbed the No. 7 player in Oklahoma and No. 41 safety in the class by Rivals … Listed the No. 44 safety in the class and top safety in Oklahoma by Scout … Rated the No. 9 player in Oklahoma and No. 52 athlete in the 2017 class by ESPN … Top 10 player in the state and No. 42 athlete in the 247Sports Composite ranking … Coached by Rafe Watkins at Muskogee High School … Turned two of his three interceptions into touchdowns as a senior … Totaled 89 tackles and six pass breakups tackles to help lead the Roughers to a 9-2 record and the Class 6II semifinal … Also hauled in 46 catches for 533 yards and six TDs on offense … Named to the Muskogee Phoenix All-Area team as a defensive back and to Scout’s All-Midlands team as an athlete … Recorded 75 tackles, three interceptions and two pass breakups as a junior … Totaled 52 tackles and two pass breakups as a sophomore … Also competed on the track and field team … Chose Arkansas over Oklahoma, Ole Miss, Texas, TCU, Baylor, Nebraska, Houston, Texas Tech, Washington State, Illinois and others.