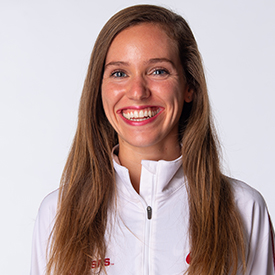 Freshman (2015-16) Track: Won the Big West Conference championship in the 5,000 meters on May 14, with a time of 17:24.91 around Jack Rose Stadium in Long Beach on FOX Sports PT … in fact, earned all-conference honors in two separate events on the same day, as two hours before winning the 5k, she was third in the 1,500-meter final at 4:22.96 … won the seventh heat of the 1,500m at the 32nd Stanford Invitational on April 1, with a season-best time of 4:22.95, not only the 10th-fastest performance in school history but also an NCAA West Regional qualifier (as the No. 39 seed; went on to rise up 14 spots from her ranking on May 28 at Kansas, clocking a 25th-place 4:26.16 at the quarterfinals for the national championships) ... another 1,500m highlight came on March 26, when she broke the five-year-standing meet record at the Cal Poly ShareSLO Invitational, at 4:26.24 … closed her freshman season as a member of the national USTFCCCA All-Academic Team. Cross Country: Began freshman year competing unattached at two meets, running the 5k in 18:40.24 at the Lagoon Open on Sept. 5, and then finishing with a runner-up time of 18:03.4 at the Cal Poly Invitational at Fairbanks Memorial Course in San Luis Obispo on Oct. 17 … added a key ninth-place finish at the Big West Championships on Oct. 31, traversing UC Riverside’s 6k Ag/Ops Course in 20:59.84, helping to lead the Mustangs to the conference title with a score of 39 points.

High School
As a senior at Los Alamitos High School, took fourth place at the CIF State Track & Field Championships in the 3,200 meters, with a time of 10:21.67 … her other PRs included 2:10.45 in the 800m (good for third at the 2015 Southern Section finals) and 4:55.27 for the 1,600m (finishing as the runner-up at the Orange County Championships) … graduated owning Griffin program records in all three events … also contributed to a 1,600m medley relay performance of 3:58.63, which not only won the Arcadia Invitational crown but ranked No. 1 in the nation at the time … helped squad go 5-0 in dual competition through 2015 on the way to her second Sunset League team title … in cross country season, her leading 3-mile time was 17:50.52, posted at the Woodbridge Classic … was a Long Beach Press-Telegram All-Area honoree … began her career at Catalina Foothills in Tucson (for whom she won the 2014 Arizona state 800m title at the Division 2 level and was chosen as the Arizona Daily Star Track Athlete of the Year) … as a junior, earned Academic Scholar distinction, before receiving the Academic Award of Excellence (as well as the Los Alamitos Female Student-Athlete of the Year accolade) as a senior … in addition to the running venue, chose Cal Poly because of the “beautiful location, its great business program and many family alumni.”

Personal — Daughter of Marc and Ann (who attended Cal Poly); has a brother, Douglas … majors in Business.