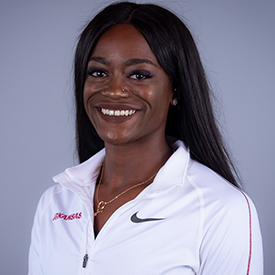 Sophomore (2017)
Second team indoor All-American … Posted a PR of 4,278 points in her first pentathlon of the season at the Razorback Invitational off a shot personal best (40-7.50) and a long jump indoor personal best (20-3) … Her pentathlon mark from the Razorback Invitational earned her the No. 6 spot in program history … Scored five points in the pentathlon at the SEC Indoor Championships assisted to a fourth-place finish with an indoor 800 PR of 2:23.51 … Qualified for the NCAA Indoor Championships in the pentathlon … Narrowly missed the podium at the indoor national meet, finishing three points behind the eighth-place multi … Jumped a lifetime best of 20-6.25 in the long jump during the outdoor season, which led to a heptathlon win at the John McDonnell Invitational … Earned five points and set a PR of 5,820 points in the heptathlon at the SEC Outdoor Championships off a season-best the 200 (23.91) and a personal best in the javelin (115-11) … Qualified for the NCAA Outdoor Championships in the heptathlon; season ended with a misstep in the heptathlon 100-meter hurdles.

Freshman (2015)
Utilized a redshirt for her season on campus.

High School
Five Arkansas Meet of Champions titles … Holds four individual state records and one as a member of the Crossett 4-x-100-meter relay … 2013 Arkansas Democrat-Gazettemale High School Athlete of the Year … Jumped to the number two rank in the nation in the high jump during her senior year with a clearance of 6-1 … Ranked number one in Arkansas in the long jump … Arkansas 4A Indoor state champion at 60 meters, 60-meter hurdles, high jump, and long jump … Qualified and placed in the top-three in at least one event all four years of her high school career.