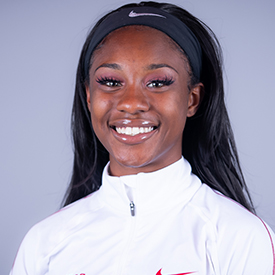 Sophomore (2017)
First team outdoor All-American (4-x-100-meter relay), second-team outdoor All-American (4-x-400-meter relay), NCAA outdoor honorable mention (100) … Began her second year with a pair of top-two finishes in the 60 and 200 at the Arkansas Invitational … Posted a PR in the 60 of 7.36, the fifth-fastest time in program history, at the Tyson Invitational where she also ran a season-best of 23.90 in the 200 … Wrapped up the indoor season with a top-12 finish in the 60 at the SEC Indoor Championships … Opened outdoor with three-consecutive titles in the 100 at the Arkansas Spring, Baylor and John McDonnell Invitationals … Posted a PR of 23.51 in the 200 to close out the regular season at the Arkansas Twilight … Helped both sprint relays place top-eight at the SEC Outdoor Championships … Qualified for the NCAA Outdoor Championships with both relays and as an individual in the 100 … Completed the year setting a program record of 43.34 with the 4-x-100-meter relay team, which earned them sixth place at the national meet … Parker also picked up second-team All-American honors with the 4-x-400-meter relay team.

Freshman (2016)
Outdoor second-team All-American, NCAA outdoor honorable mention … Kicked off her freshman campaign with a runner-up finish at the Gladstein Invitational (1/23) in the 60 … Recorded a PR in the same event the following week, clocking 7.56 at the Razorback Invitational (1/30) where Parker also picked up an indoor personal best in the 200 of 24.29 … Closed the indoor season with fifth-place finishes in the 60 and 200 at the Arkansas Qualifier (2/19) … Opened the outdoor season placing inside the top-eight in three events (100, 200 and 4-x-100) at the Arkansas Spring Invitational (3/26) … Part of the first-place finishing SMR team at the Texas Relays (4/1) where she also finished fifth in the 100 … Finished second in the 100 at the John McDonnell Invitational, posting a personal best of 11.39 in the event … Posted a personal best in the 200 of 23.79 at the SEC Outdoor Championship … Qualified for the NCAA Outdoor Championship in the 100 and as a member of the 400 relay … Tied the Razorback program record of 43.84 with the 400 relay, placing ninth and earned honorable mention recognition for her efforts in the 100.