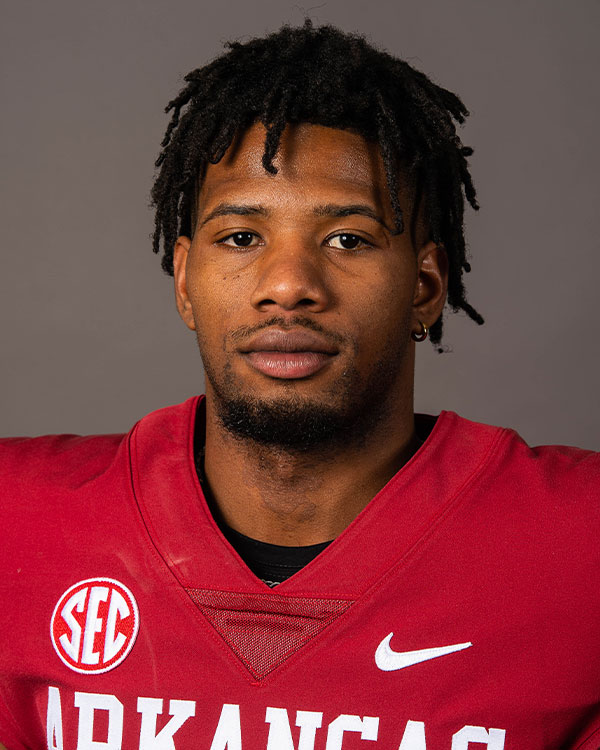 2020 (REDSHIRT SOPHOMORE): Played in all 10 games and made one start at cornerback in the season finale against Alabama (Dec. 12) … Logged 17 total tackles (8 solo) with 1.0 tackle for loss and two passes broken up … Made at least one tackle in each of the first four games of the season, totaling one stop against Georgia (Sept. 26), Ole Miss (Oct. 17) and Texas A&M (Oct. 31) and three in the road win at Mississippi State (Oct. 3) … Broke up first pass of the year in the win over Tennessee (Nov. 7) and broke up his second pass of the year and made one tackle the following week at Florida (Nov. 14) … Recorded two tackles against LSU (Nov. 21) and one at Missouri (Dec. 5) … Concluded the season making his only start of the year and recorded a season-best seven tackles with four solo stops and 1.0 tackle for loss … Registered a tackle for loss for loss of two yards on third down, forcing a punt … According to Pro Football Focus, played 233 defensive and 207 special teams snaps … Posted a season defensive grade of 71.7 and a tackling grade of 81.7.

2019 (REDSHIRT FRESHMAN): Played in 10 games, starting three at cornerback for the Razorbacks in 2019 … Got the starting nod against San Jose State (Sept. 21), Mississippi State (Nov. 2) and at LSU (Nov. 23) … Totaled 387 plays, according to Pro Football Focus, seeing 267 snaps on defense, with the other 120 coming on Arkansas’ various special teams units … Recorded 22 tackles, 15 solo, with one for loss, breaking up one pass and recovering a fumble that was returned 25 yards for a touchdown against Colorado State on Sept. 14 … First career fumble recovery … Didn’t have a tackle until the fourth game of the year, going off for eight solo stops against San Jose State … Posted his top tackling grade from PFF against the Spartans with a mark of 83.2 … After one tackle vs. Kentucky (Oct. 12), posted two stops in three-straight games vs. Alabama (Oct. 26), Mississippi State (Nov. 2) and Western Kentucky (Nov. 9), with a tackle for loss against the Hilltoppers … Tallied seven stops in his final game of the year at LSU on Nov. 23 … Finished the year with an overall tackling grade of 85.3 from PFF.

2018 (FRESHMAN): Played in two games in his first season with the Razorbacks … saw action against North Texas on Sept. 15 and LSU on Nov. 10 … Totaled four snaps, three in punt return and one in defensive coverage against a Tiger receiver.

HIGH SCHOOL: A four-star recruit according to Rivals … Rated as the No. 2 player in the state of Arkansas and the No. 28 cornerback in the nation by Rivals … Three-star prospect by ESPN and 247Sports … Rated by 247Sports Composite rankings as the No. 5 player in the state and No. 49 cornerback nationally … Ranked as the No. 69 cornerback nationally by ESPN … Played in the Offense-Defense All-American Bowl in New Orleans on Dec. 29 … Clocked under 4.4 in the 40-yard dash … As senior, rushed for 249 yards and three TDs on just 25 carries … Added 29 receptions for 485 yards and five touchdowns … Averaged 13.6 yards per touch on offense … Had nine tackles and two interceptions on defense … As a junior, registered 36 tackles, one INT and five pass breakups … Added 406 receiving yards and four TDs to go along with 136 rushing yards and one TD … Chose Arkansas over Florida, Mississippi State, Oklahoma State, Baylor, Memphis, Purdue, Illinois, Iowa State and others.