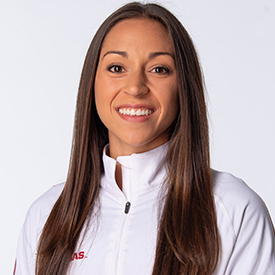 At the University of California(Red-shirt Senior) 2019
Due to injury, the All-American only competed in one indoor meet during the 2019 season… Took second place in the pole vault at the UW Invitational with a mark of 4.11m/13-5.75.(Junior) 2018
Second-Team All-American during both indoor and outdoor season… Pac-12 and MPSF Champion in the pole vault… Took 11th place at the NCAA Outdoor Championship as she set a school record by clearing 4.30m (14-1.25)… Tied for the top mark at the NCAA West Prelims with a clearance of 4.18 (13-8.5)… Notched a clearance of 4.27m (14-0) at the Pac-12 Championship to bring home the crown… Won nine of the 12 pole vault competitions during indoor and outdoor season… Claimed 10th place at the NCAA Championship with a clearance of 4.21m (13-9.75)… Won the MPSF Championship with a mark of 4.20m (13-9.25)… The MPSF mark wasn’t enough to qualify for the NCAA Indoor Championship, so she competed the next day at the SPU Final Qualifier and posted a mark of 4.30m (14-1.25) on her final attempt to earn a spot at the NCAA Championship… Pac-12 All-Academic Honorable Mention… MPSF Scholar-Athlete. (Sophomore) 2017
Recorded a personal best clearance of 4.20m (13-9.25) in the pole vault competition at the NCAA West Prelims as she took 14th, but cleared the same height as the final two qualifiers for the NCAA Championship… Won a bronze medal at the Pac-12 Championship as she cleared 4.12m (13-6.25)… Won the pole vault at the Brutus Hamilton Challenge, The Big Meet, Stanford Invitational, Sacramento State Hornet Invitational and the Cal Opener…Won a silver medal as she cleared 4.12m at the MPSF Indoor Championship. (Freshman) 2016
Placed fifth in the pole vault at the Pac-12 Championships after clearing 12-2.00 … took 28th at the NCAA regional meet with a height of 13-9.25 … best vault of the year was 13-4.50 during a runner-up finish at the Pac-12-Big Ten Invitational … that effort put her third on Cal’s all-time list … 18th in the pole vault at the MPSF indoor meet (12-2.00).High School
Versatile athlete who participated in both track and field events at Eldorado HS … Four-time New Mexico state pole vault champion and also placed in the long jump, triple jump, and the 4×100-meter and 4×400-meter relays to lead her team to the New Mexico State Championship … Named the 2013-14 New Mexico Gatorade Female Track Athlete of the Year and held a 4.23 grade point average.PERSONAL: Majoring in integrative biology…Parents are Joe and Mary…Has a twin sister, Meaghan, that attends Texas Tech and a younger brother, Joe…Grandfather Robert Leinen attended Cal in the 1980s…Hobbies include photography, cooking, crafting and shopping