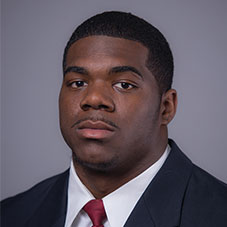 Senior (2014)
Started in all 13 games… A consensus first team All-SEC selection… Tallied a conference-leading 128 tackles on the season, the most tackles for Arkansas since 2003 and good for 13th on the program’s single season chart… Became first Razorback to lead the SEC in tackles… Recorded 10.5 tackles for loss, two forced fumbles, one recovered, and an interception for 30 yards… The first Arkansas linebacker to be named to the coaches’ first team All-SEC team since Sam Olajubutu in 2006… Led the team in tackles 10 times during the season… at No. 6 Auburn (Aug. 30): Registered seven total tackles and a fumble recovery in the season-opener… at Texas Tech (Sept. 13): Collected a team-leading 11 tackles, including eight solo stops and set-up an Arkansas touchdown with a 30-yard interception return… vs. No. 6 Texas A&M (Sept. 27): Led the team in tackles with 13, including eight solo stops and one tackle for loss… vs. No. 7 Alabama (Oct. 10): Totaled a team-high 10 tackles… vs. No. 10 Georgia (Oct. 18): Led the team in tackles with 10 and posted a career-high two tackles for loss… vs. UAB (Oct. 25): Posted a team-leading nine tackles, with one for loss and one pass breakup…at No. 1 Mississippi State (Nov. 1): Recorded a career-high and team-leading 15 total tackles, including eight solo… vs. No. 20 LSU (Nov. 15): Earned SEC Co-Defensive Player of the Week with a team-leading 10 tackles, one sack and a forced a fumble… vs. No. 8 Ole Miss (Nov. 22): Led Arkansas with 11 tackles, seven solo, and second consecutive game with a forced fumble… at No. 17 Missouri (Nov. 29): Led the team and tied a career-high with 15 tackles.

Sophomore (2012 at Coffeyville CC)
Completed prep career as two-time junior college All-American… Ranked as the No. 8 junior college outside linebacker in the nation by 247Sports.com and was 82nd in ESPN’s Junior College 100 ranking… Named a first-team NJCAA All-American and Jayhawk Community College Conference’s Defensive Player of the Year… Recorded 130 tackles, 13.5 for loss with 1.5 sacks, three pass breakups, one forced fumble and one blocked kick… Tackles total was fourth on Coffeyville’s single-season list… Coached at Coffeyville by Aaron Flores… Selected Arkansas over Kansas State.

Personal
Born Aug. 5, 1993 to Mark and Tela Spaight… Enrolled in the Fulbright College of Arts and Science.