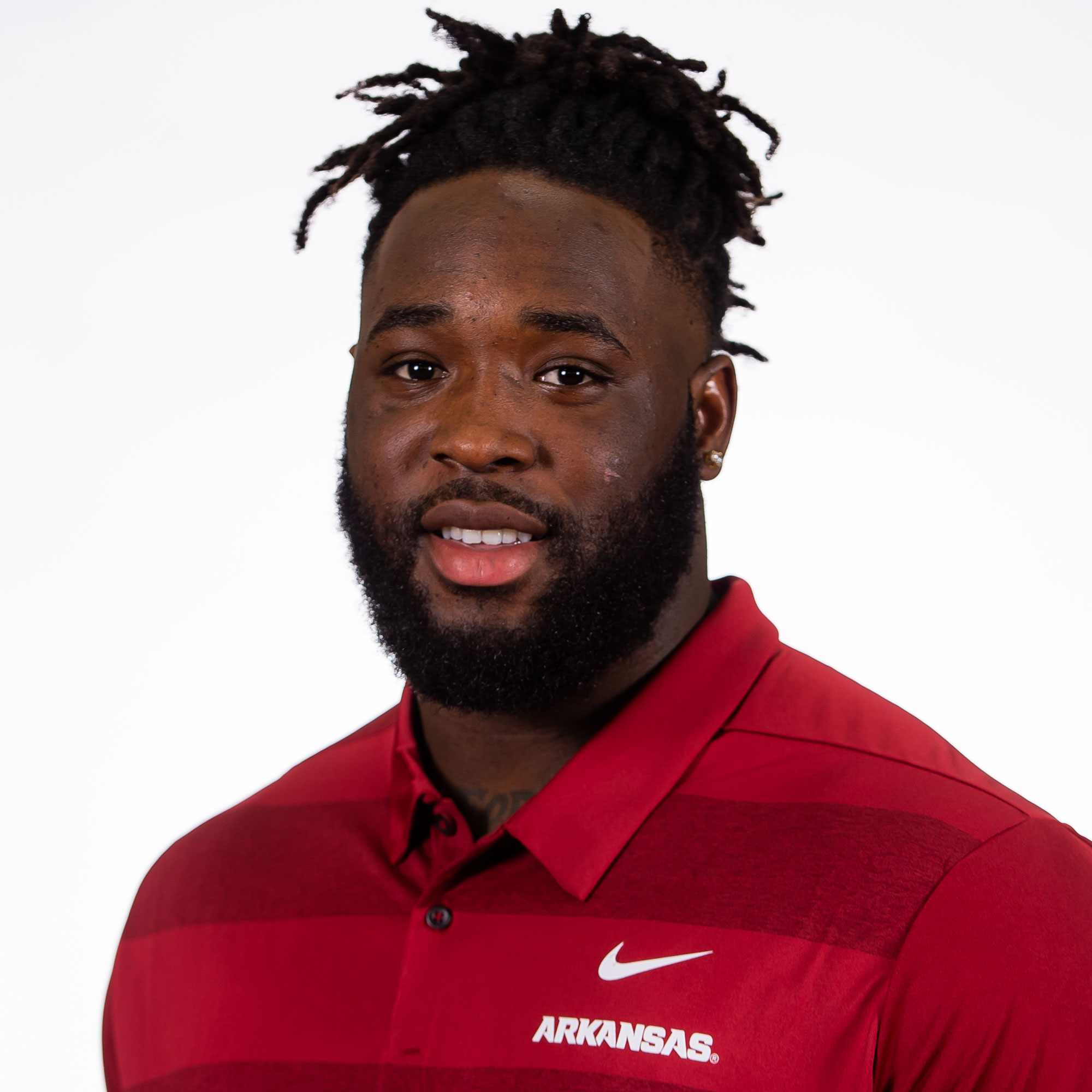 2019 (SENIOR): Bednarik Award Watch List member … Preseason All-SEC Third Team honoree by the coaches and media … Started all 12 games at defensive tackle in his final season with the Razorbacks … Appeared in 595 plays, with 531 coming on the defensive line … Recorded 39 tackles in 2019, with 20 solo stops … Racked up a team-best 8.5 tackles for loss, also pacing the team in sacks with 5.0 … Posted three quarterback hurries, forced a fumble and recovered a fumble … Opened the season with six tackles, with two sacks, against Portland State … Earned Pro Football Focus SEC Team of the Week honors for his performance vs. the Vikings, grading out at 73.2 overall defensively … He and teammate Kam Curl combined for four sacks in the game, making it the first time two Razorbacks had piled up four or more in a single game since 2014, when Taiwan Johnson (2.5) and Darius Philon (1.5) did it on Sept. 6, 2014, against Nicholls State … One of four games with five or more tackles, also doing so against Kentucky (5), Alabama (5) and Mississippi State (7) … Put together a stretch of five-straight games with at least one tackle for loss from Texas A&M (Sept. 28) to Mississippi State (Nov. 2), including three consecutive games with a sack (Texas A&M, Kentucky, Auburn) … Recorded his only forced fumble of the season, fifth of his career, against Colorado State on Sept. 14 … Recovered his second fumble of his career vs. Auburn on Oct. 19 … Finished the season with a 78.6 overall defensive grade from Pro Football Focus, including an 81.5 in pressure.

2018 (JUNIOR): Started all 12 games for the Razorbacks, primarily at defensive end, during his junior season, totaling 597 snaps … Recognized by Pro Football Focus during the season, earning a spot on its SEC Team of the Week in week eight with a 74.9 grade … Racked up 45 tackles, 16 unassisted, to rank sixth on the team in total tackles in 2018 … Paced the Razorbacks with 10 tackles for loss, accumulating 44 yards for loss, also a team-best … The first Arkansas defender with double digit TFLs since Deatrich Wise Jr. totaled 10.5 in 2015 … Included in his 10 tackles for loss were 4.5 sacks for 25 yards, good for second among Razorbacks … Led the team with 11 quarterback hurries … Forced a team-best three fumbles and recovered another, while also breaking up a pass attempt … Ranked sixth in the SEC in fumbles forced … Two of his three FF came at Colorado State on Sept. 8, recovering one in the game, while the third was against LSU on Nov. 10 … Earned a 92.1 defensive grade from PFF for his performance against CSU, his highest marks of the season – also tabulated at 90.5 for run defense in the contest … Posted a season-high seven tackles against Tulsa on Oct. 20 … Also had a career-best 3.5 tackles for loss vs. the Golden Hurricane … Tallied five or more tackles on four separate occasions, with six against Alabama (Oct. 6) & LSU (Nov. 10) and five on the road at Mississippi State (Nov. 17) … Recorded at least 0.5 TFL in each of the first four games of the year, then put together another stretch of four games from Oct. 20-Nov. 17 … Notched a sack in three of those four games against Tulsa (2.0), Vanderbilt (0.5) and LSU (1.0), as well as earlier in the year at Auburn (1.0) … His two sacks were the most by a Razorback in a game since Wise vs. Missouri on Nov. 27, 2015 … Ranked fourth among starting teammates with a 71.4 season grade from PFF … Part of a defensive crew that racked up 882 total tackles over the course of the 2018 campaign.

2017 (SOPHOMORE): Started 11 of 12 games played at defensive end … Posted 37 tackles, the second-most among defensive linemen on the team … Finished second on the team in tackles for loss (7.5) … Tied for third on the team in sacks (2.5) … Made a tackle in 11 games … Led all defensive linemen on the team in pass breakups (3) … Tied for second on the team in fumbles forced (2) … One of eight SEC players to force two fumbles in the same game and one of only four to do it in an SEC game … Turned in a career-high nine tackles in two games … Recorded at least 0.5 tackles for loss in seven games … Four of his tackles for loss were against SEC opponents … Opened the season with at least 0.5 tackles for loss in each of the first four games to total 4.0 during that span … vs. No. 23 TCU (Sept. 9): Finished second on the team in tackles (9) … 1.5 tackles went for lost yardage … vs. New Mexico State (Sept. 30): Picked up his fourth tackle for loss in as many games on an 11-yard sack … Also broke up a pass … vs. No. 16 Mississippi State (Nov. 18): Turned in a career game with highs in tackles (9), tackles for loss (2.5) and fumbles forced (2) … Also credited with one sack … Had three tackles, two tackles for loss, a sack and both forced fumbles in the first quarter … Seven of his nine tackles resulted in a gain of three yards or less … Part of a defense that didn’t allow Mississippi State to score any points on its first four drives of the game … Limited Mississippi State to 348 total yards of offense, marking the Bulldogs third-lowest total of the season.

2016 (FRESHMAN): Played all 13 games with starts in each of the last five … Tied for second among SEC freshmen in sacks (2.5) and fifth in tackles for loss (5.5) … Contributed 27 tackles, including eight solo stops … Had two quarterback hurries … Made at least one tackle in 10 games … Recorded at least 0.5 tackles for loss in seven games and at least 0.5 sacks in three games … at No. 15 TCU (Sept. 10): Leveled quarterback Kenny Hill for his first career sack on a third down to end a TCU drive late in the third quarter … Finished with four tackles …. vs. Alcorn State (Oct. 1): Logged a season-high 1.5 tackles for loss … Made a tackle for a loss of four yards with Taiwan Johnson on second down of the Braves’ first drive of the second quarter … Booked a solo tackle behind the line of scrimmage on the next play of the drive to set up a third-and-long … vs. No. 12 Ole Miss (Oct. 15): Set up a third-and-nine situation when he combined for a sack of quarterback Chad Kelly on Ole Miss’ second drive of the third quarter … vs. No. 11 Florida (Nov. 5): Chipped in three tackles, including 0.5 for loss, in his first start at defensive tackle … Forced an incompletion with a quarterback hurry on Florida’s second possession … vs. Mississippi State (Nov. 19): Had a season-high seven tackles with 0.5 tackles for loss … at Missouri (Nov. 25): Recorded a sack for a loss of five yards on Missouri’s first drive of the third quarter … vs. No. 22 Virginia Tech (Dec. 29): Notched two tackles, including 0.5 for loss in the first half.

HIGH SCHOOL: An early enrollee who practiced in January 2016 with the program before taking part in Under Armour All-America game … Earned a five-star rating from 247Sports and a four-star rating from ESPN, Rivals and Scout … Tabbed the No. 1 player in the state of Arkansas by ESPN, 247Sports and Rivals … Ranked the No. 11 overall player in the country by ESPN, the No. 18 overall by 247Sports, the No. 44 overall by Scout and the No. 50 overall by Rivals … Pegged the No. 2 defensive end prospect by 247Sports, the No. 3 defensive end prospect by ESPN and the No. 7 defensive end prospect by Scout … Four-star ESPN ranking came with a grade of 89 … Was clocked at 4.59 in the 40-yard dash … 2015 ALL-USA Arkansas Football Defensive Player of the Year … Three-time all-state selection … Named the 2015 Gatorade Arkansas Football Player of the Year and Hooten’s Arkansas Football Farm Bureau Class 5A Defensive Player of the Year … Chosen as the 5A South Outstanding Lineman and Sports Illustrated’s High School Athlete of the Month for November … Named the 2015 Arkansas Democrat-Gazette All-Arkansas Preps Defensive Player of the Year … Selected to the MaxPreps 2015 Football Medium Schools All-America first team … Garnered MaxPreps 2015 Football All-America second team honors … Earned the prestigious 2015 Paul Eells award, given annually to an Arkansas high school football player who best exhibits perseverance, determination, courage and resolve in the face of adversity … As a senior, tallied 77 tackles, including 13.0 for loss, 24.0 sacks, eight quarterback hurries and nine pass breakups to help Hope to a 9-3 record and the Class 5A quarterfinals under head coach Jay Turley … Also rushed for 184 yards and eight touchdowns on 21 carries, caught eight passes for 97 yards and one touchdown and averaged 50 yards on seven kickoff returns … Participated in The Opening at Nike Headquarters in Beaverton, Oregon, which is considered the most prestigious summer showcase for high school football prospects … Recorded 72 tackles, 22.0 sacks, 13 pass breakups, six forced fumbles and three fumble recoveries as a junior … Named the Arkansas Democrat-Gazette’s Sophomore Defensive Player of the Year in 2013 after recording 77 tackles, including 32.0 for loss and 16.0 sacks … Two-time defending state shot put champ … Ran an 11.6 second 100-meters in the 2015 state district track meet … Chose Arkansas over Alabama, Auburn, Baylor, Clemson, LSU, Mississippi State, Missouri, Notre Dame, Oklahoma, Ole Miss, Stanford, TCU, Texas, Texas A&M, Washington State and others.

PERSONAL: Born on Sept. 25, 1997 … Son of Deanna Giddens, who is a nurse … Aunt Jayme Dunnings is also a nurse … Has two sisters: Dominecia and Taneka … Recreation and sport management major.