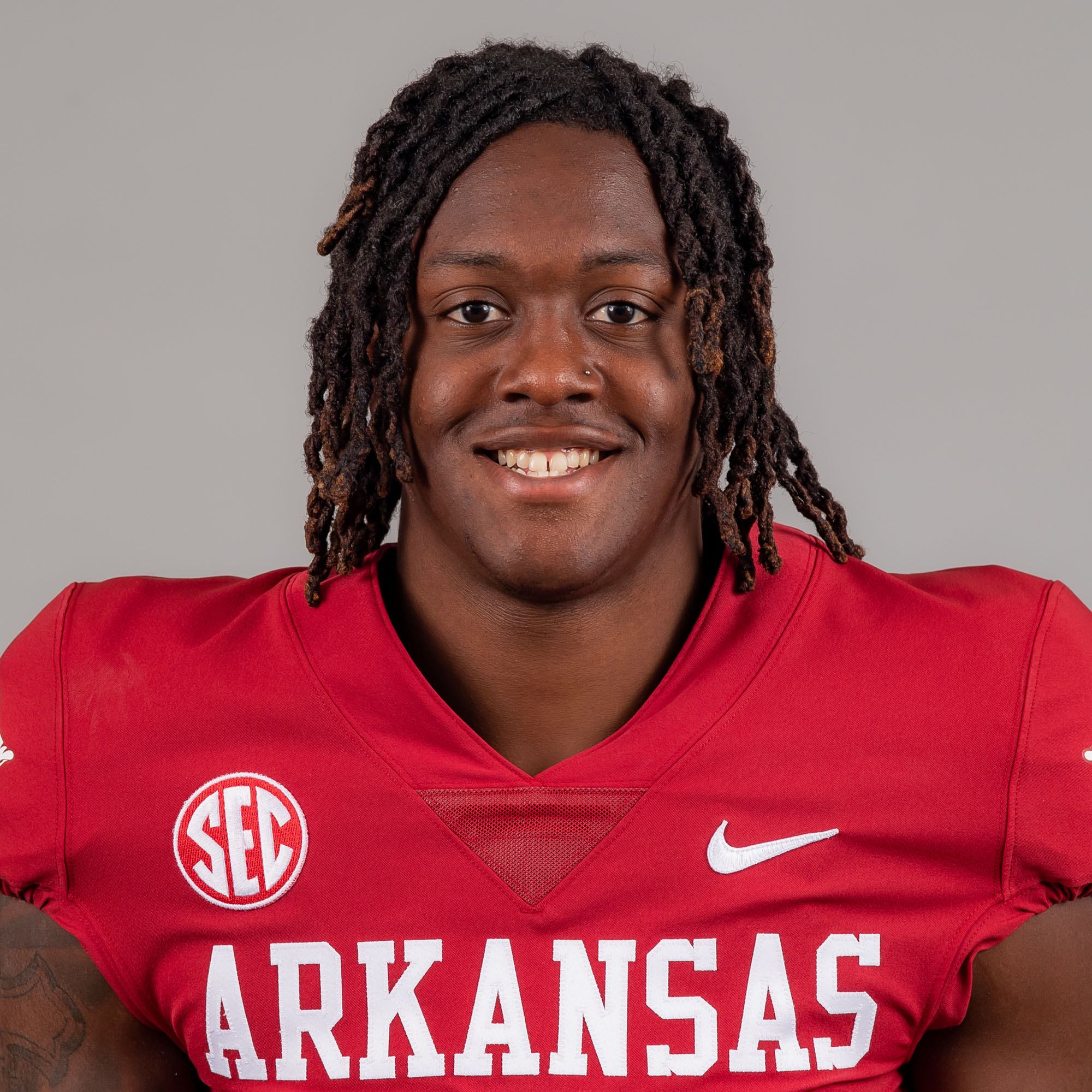 2020 (JUNIOR): Caught a 32 passes for a career-best 619 yards while starting all 10 games for the Razorbacks … Hauled a career-high five touchdowns to match his total TD output from his first two seasons combined … Finished second on the team in catches (32), yards (619) and touchdowns (5) … Scored his first touchdown of the year on a four-yard reception at No. 13 Auburn (Oct. 10) … Notched his second touchdown of the season making a one-yard grab against Tennessee and recorded three catches for 64 yards (Nov. 7) … Registered 129 receiving yards on just two catches that both went for touchdowns at No. 6 Florida (Nov. 14) … Had touchdown grabs of 47 and 82 yards against the Gators, the latter is the longest Razorback reception since 2012 and the 10th longest passing touchdown play in program history … On his second catch at Florida, eclipsed 1,000 career receiving yards … Made five catches for a career-high 140 receiving yards the following week against LSU (Nov. 21) … Posted back-to-back 100+ yard receiving games for the first time in his career … At Missouri (Dec. 5), made two grabs for 23 yards, a touchdown, and his first career two-point conversion … Made a 14-yard touchdown catch on a pass from KJ Jefferson with 47 seconds remaining in the fourth quarter, and hauled in the ensuing two-point conversion reception.

2019 (SOPHOMORE): Started all 12 games of the 2019 season at wide receiver … Saw most of his plays come out wide (556), with a decent amount coming in the slot (135), totaling 700 snaps as a sophomore for the Razorbacks, according to Pro Football Focus … Led the team in receptions with 33 and touchdowns with four, racking up 423 receiving yards for an average of 12.8 per catch and 35.2 per game … Caught a touchdown pass from four different quarterbacks in 2019 … Totaled 83 yards after catch … Opened the year with a team-best five receptions, totaling 30 yards, against Portland State on Aug. 30 … Led the team for a second consecutive week in catches with six at Ole Miss (Sept. 7) in the SEC opener, totaling 84 yards, setting a career-high in yards and matching a career-best in receptions, both set against North Texas (Sept. 15, 2018) of six receptions for 61 yards … After a two-catch game against Colorado State, posted a career-high 115 yards on four receptions against San Jose State (Sept. 21), scoring his first touchdown of the year on a 62-yard pass from Nick Starkel in the first quarter, his longest reception of the season at that point … Also hauled in a 40-yard pass from Starkel in the fourth quarter, leading to a game-tying touchdown for the first 100-yard receiving game of his career … Most receiving yards by a Razorback since Jordan Jones’ 132 vs. Eastern Illinois on Sept. 1, 2018 … Added another touchdown on a 13-yard pass from Ben Hicks in the second quarter against Texas A&M in Arlington on Sept. 28 … Part of a four-catch, 62-yard game, making him one of three Hogs to record a receiving TD in back-to-back games in 2019 … It also marked consecutive Southwest Classic games with a touchdown reception … Totaled three catches for 18 yards at Kentucky on Oct. 12 … Had at least two receptions in each of the last four games, finding the end zone against Mississippi State (Nov. 2) on an 11-yard pass from John Stephen Jones and a 24-yard pass from Jack Lindsey at LSU (Nov. 23).

2018 (FRESHMAN): Played in 10 games for the Razorbacks in 2018, starting seven as a wide receiver … Totaled 338 snaps during his first season of collegiate football, according to Pro Football Focus … Finished third on the team in receiving yards with 206, catching 18 passes for one touchdown and an average of 11.4 yards per reception … Saw his first playing time against North Texas on Sept. 15 and made an immediate impact, pacing the team in receptions and receiving yards with four and 61, respectively … Recorded at least one catch in each of the next four games, with multi-reception performances in each of the last three after a one catch, 13-yard game at Auburn in the SEC opener … Scored his first touchdown against Texas A&M in Arlington as part of two reception, 50-yard performance, finding the end zone on a 29-yard pass from Ty Storey in the fourth quarter … It would also stand as his longest catch of the year, earning his top offensive grade of the season at 81.0 from PFF … Posted two-catch games in each of the next two weeks against Alabama (six yards) and Ole Miss (14 yards) … Racked up 33 yards on three receptions against Vanderbilt, coming up just shy of his season-high with a 28-yard catch in the fourth quarter … Wrapped up the year with one receptions for 14 yards against LSU in the home finale and three catches and 15 yards at Mississippi State on Nov. 17 … Targeted 38 times over the course of the season (PFF) … Part of an offense that completed the 2018 campaign with 4,028 yards of total offense and 28 touchdowns, including 2,307 yards and 17 scores coming through the air.

HIGH SCHOOL: Three-star recruit by ESPN and 247Sports … No. 464 ranked overall player in the class by 247Sports … No. 58 ranked prospect in Texas by 247Sports … No. 74 ranked wide receiver by 247Sports … For his career, recorded 155 receptions for 2,988 yards and 41 touchdowns to go with three touchdowns on the ground in 31 games played … Averaged 19.3 yards per catch and 96.4 yards per game … Longest catch was 75 yards twice … Posted 1,000-yard receiving seasons in his junior and senior seasons … Also returned punts and kicks … Totaled 527 kickoff return yards and 193 punt return yards … Racked up 3,832 all-purpose yards for a 123.6 per-game average … Logged 10 100-plus yard receiving games, including three with 200-plus yards, in three seasons … As a senior in 2017, helped Magnolia to a 6-3 record with a 5-2 mark in conference play … Caught 51 passes for 1,018 yards and 15 touchdowns … Averaged 20.0 yards per reception and 101.8 per game … Topped the century mark through the air four times … Caught a touchdown pass in eight of 10 games … Posted four multi-touchdown catch games … Had a season-high 269 yards and four receiving touchdowns on nine catches to go with a rushing score in the season opener against A&M Consolidated … Longest catch of the season was 74 yards against Waller … As a junior in 2016, named to the Texas Sports Writers Association All-State third team … First-team All-Montgomery County selection … Posted career highs in catches (75) and receiving yards (1,456) and touchdown catches (21) … Tallied five 100-plus yard receiving games, including two with 200-plus yards … Averaged 121.3 receiving yards per contest … Recorded seven multi-touchdown catch games … Had a 50-plus yard catch in seven games … Set single-game career highs in receptions (18) and receiving yards (291) and caught four touchdown passes in a 75-54 win vs. Tomball … Had 29 receptions for 514 yards and five scores as a sophomore in 2015. Chose Arkansas over Vanderbilt, Washington State, Colorado State, Houston, Iowa State, Louisiana Tech, Minnesota, Northwestern, Rice, SMU, Texas State, Texas Tech, Tulsa, UTSA and Virginia.