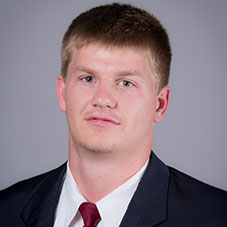 Senior (2015)
Played in 10 games … Tallied 15 tackles, including 1.5 sacks … Recorded four quarterback hurries … Suffered a broken foot at LSU on Nov. 14 and missed the final three games of the season … He and Washington State defensive end Hercules Mata’afa were the only Lahainans on FBS rosters.

Junior (2014)
Moved from tight end to defensive end in the offseason and saw action in nine games … Tallied 14 tackles, including 2.0 for a loss and a half sack … Also recorded two quarterback hurries and two pass breakups … vs. UAB (Oct. 25): Posted a career-high five tackles and 1.5 for a loss in the homecoming win … at No. 1 Mississippi State (Nov. 1): Registered a pair of tackles against the top-ranked Bulldog … vs. Texas (Dec. 29): Tallied two tackles, one quarterback hurry and a pass breakup in the Razorbacks’ AdvoCare V100 Texas Bowl victory.

Sophomore (2013)
Appeared in all 12 games and made eight starts … Caught two passes for 29 yards and one touchdown and totaled 19 yards on two kickoff returns … vs. Samford (Sept. 7): Caught a 24-yard touchdown in Arkansas’ non-conference victory … vs. Mississippi State (Nov. 23): Returned two kickoffs for 19 yards.

Freshman (2011)
Worked with the Arkansas scout team while redshirting.

High School
Played linebacker for coach Robert Watson at Lahainaluna High School on the island of Maui in Hawai’i … Named the Maui Interscholastic League Defensive Player of the Year after his senior season in which he collected 140 tackles, 10 sacks, and two interceptions … Recorded 111 tackles, six sacks and three interceptions in his junior year for the Lunas.

Personal
Son of Chuck and Paula Loewen and has a brother, Cole … Father played offensive line for San Diego from 1980-84 after being drafted by the Chargers in the seventh round of the 1980 NFL Draft … Named to the Razorback Honor Roll in the fall of 2011 and 2014 … Majoring in management.