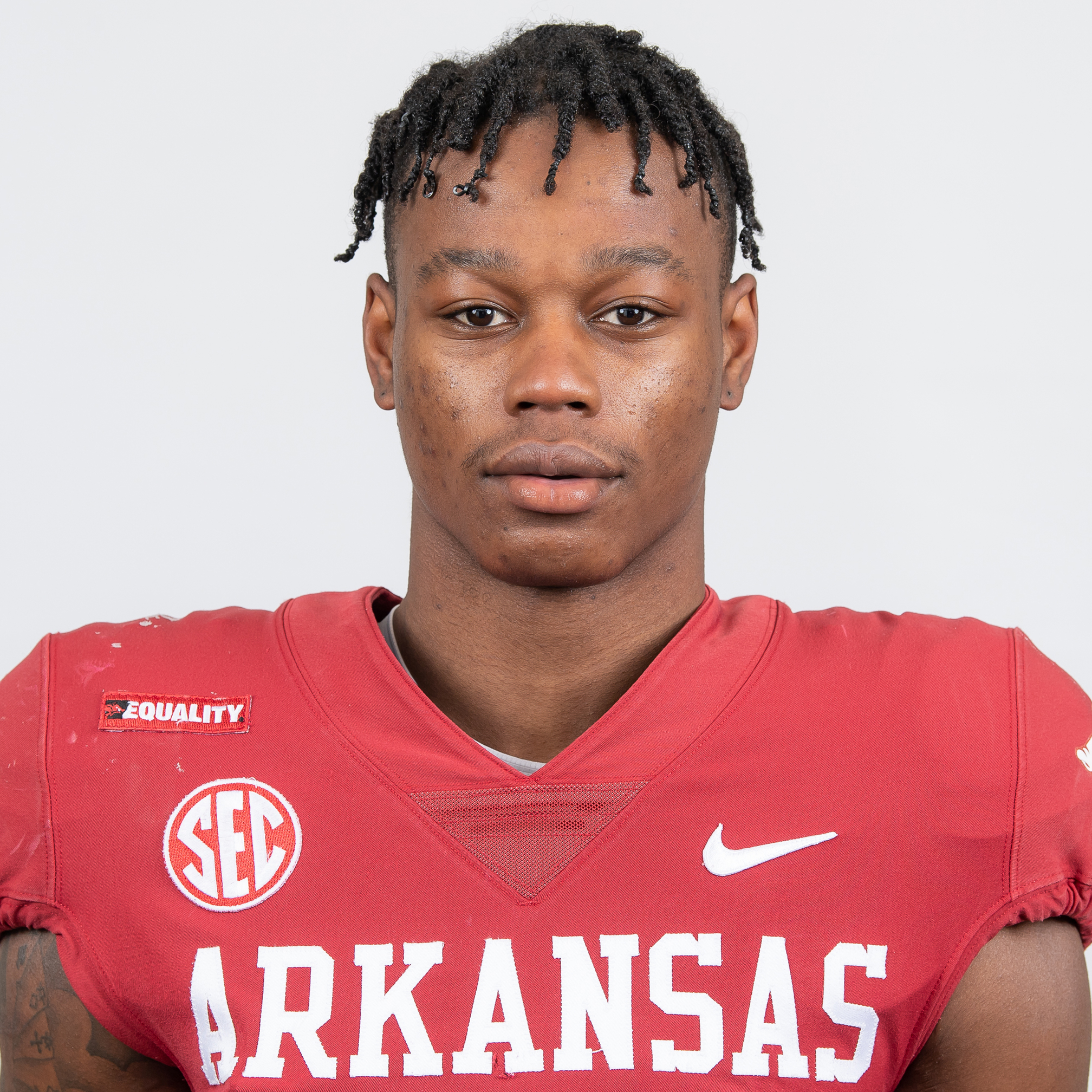 2021 (REDSHIRT SENIOR): Started all 13 games for the Razorbacks in his final season leading the Southeastern Conference with five interceptions and making 54 total tackles to earn First-Team All-SEC honors … His five interceptions were the most by a Razorback since Tramain Thomas in 2011 … Recorded a PFF coverage grade of 70.9 – best among Arkansas DBs – while allowing 31 receptions on 57 targets … Picked off his first pass of the season in season opener against Rice (Sept. 4), making three tackles and breaking up another pass … Made two tackles in win over Texas (Sept. 11) … Notched four tackles against Georgia Southern (Sept. 18) … Helped Arkansas claim the Southwest Classic over Texas A&M (Sept. 25) making six tackles and picking off his second pass of the season to go along with a half tackle for loss … Made six tackles at Georgia (Oct. 2) … Broke up two passes and made five tackles with a half tackle for loss at Ole Miss (Oct. 9) … Made a season-best eight tackles with his third interception against Auburn (Oct. 16) … Notched four tackles in victory over Mississippi State (Nov. 6) … Intercepted his fourth pass of the season in Battle of the Boot win at LSU (Nov. 13), adding five tackles … Forced a fumble and made five tackles at Alabama (Nov. 20) … Picked off his fifth pass of the year and made four tackles in Battle Line Rivalry victory over Missouri (Nov. 26) … Broke up one pass and made one tackle in Outback Bowl win over Penn State (Jan. 1).

2020 (REDSHIRT JUNIOR): Played and started in eight games at cornerback … Logged 31 tackles (20 solo) with 2.0 tackles for loss, one interception and one forced fumble … Led the team with six passes broken up … In the season opener, intercepted a pass, made three tackles and broke up a pass against Georgia (Sept. 26) … Picked off Georgia QB D’Wan Mathis at the Arkansas 5-yard line, thrwarting a 91-yard drive … Registered three tackles with his first tackle for loss of the year in the win at Mississippi State (Oct. 3) … Sustained an injury at Mississippi State, played a season-low 35 snaps and missed the next two games against Auburn (Oct. 3) and Ole Miss (Oct. 10) … Returned to action by making three tackles at Texas A&M (Oct. 31) … In the win over Tennessee (Nov. 7) made one tackle and broke up his second pass of the year … Closed out the season making at least five tackles in each of the last four games of the season … Recorded five tackles and 1.0 tackle for loss at Florida (Nov. 14) … Forced the first fumble of his career in the second quarter, which was recovered by DB Myles Slusher, and made five stops for the second straight week against LSU (Nov. 21) … For the third straight week, logged five tackles, including a season-best four solo stops, and tied a career-high with two passes broken up at Missouri (Dec. 5) … Tied a career-high with six tackles and broke up a pass for the third consecutive game in the season finale against Alabama (Dec. 12) … According to Pro Football Focus, saw action in 576 defensive and 80 special teams plays … Posted a season defensive grade of 70.9 with a single-game high of 76.4 against Mississippi State … Recorded a season-best 81.7 tackling grade against Alabama.

2019 (REDSHIRT SOPHOMORE): Started all 10 games at cornerback he played in for the Razorbacks in 2019 … Totaled 760 plays, according to Pro Football Focus, with 659 snaps on defense, also seeing time on Arkansas’ various special teams units … Recorded 39 total tackles, 25 solo, with one for loss, as well as three pass breakups, an interception and a fumble recovery … Posted multiple tackles in all 10 games he played, opening the year with three against both Portland State (Aug. 30) and Ole Miss (Sept. 7) … Tallied four stops against Colorado State on Sept. 14, recovering a fumble caused by McTelvin Agim in the second quarter … Added four more tackles, three solo, against Texas A&M on Sept. 28 in Arlington, followed by a season-high five at Kentucky on Oct. 12 … Matched his season-best of five against Western Kentucky on Nov. 9 after a string of three (Auburn), two (Alabama) and four (Mississippi State) tackles before the Fayetteville finale … Closed the year by topping his season-high mark in total tackles with six against Missouri in Little Rock on Nov. 29, including a tackle for loss … Posted his top tackling grade from PFF against the Hilltoppers at 81.1 … Had his best overall grade against Colorado State, finishing the game with a mark of 81.3 after a 78.8 in tackling and an 80.4 in coverage.

2018 (REDSHIRT FRESHMAN): Played in 11 games, starting three for the Razorbacks in 2018 … Totaled 203 defensive snaps, with 117 coming in run defense, a category he graded out at 66.7 according to Pro Football Focus … Recorded nine tackles, eight unassisted, with one pass breakup coming in the season finale at Missouri on Nov. 23 … Opened the season with two tackles against Eastern Illinois (Sept. 1), then posted one in each game against Alabama (Oct. 6) and Tulsa (Oct. 20), before posting a season-best of five unassisted in the finale in Columbia … Tallied tackling grades of 73.5 or better in three of the four games he was credited with a stop … Wrapped his first collegiate season with a 63.6 defensive grade from PFF.

HIGH SCHOOL: Consensus four-star prospect by ESPN, Rivals, Scout and 247Sports … No. 1 ranked player in Arkansas by Rivals, Scout and 247Sports … Tabbed a top 200 player in the Class of 2017 by ESPN, Rivals and 247Sports … Ranked the No. 113 overall prospect and No. 12 safety by 247Sports … Earned a scout grade of 82 and the No. 191 position on the ESPN300 as the No. 12 safety … Pegged the No. 172 overall prospect and No. 16 safety by Scout … Tabbed the No. 163 overall prospect, No. 18 safety and the top player in the state of Arkansas in the 247Sports Composite ranking … Played for the East Team at the U.S. Army All-American game making three tackles in the 27-17 win over the West … Made 110 tackles and recorded seven interceptions as a senior at Ashdown High School … Returned one interception for a 71-yard TD while also hauling in 52 receptions on offense for 813 yards and seven scores … As a junior in 2015, he recorded 122 tackles and five interceptions, highlighted by three for touchdowns … Also had seven total TDs on offense and kick returns … Chose Arkansas over Alabama, Auburn, LSU, Oklahoma, Oklahoma State, Baylor, Missouri and others.

PERSONAL: Born on Aug. 24, 1999 … Son of Danica Richard and Patrick Brown, and stepson of Eddie Richard.