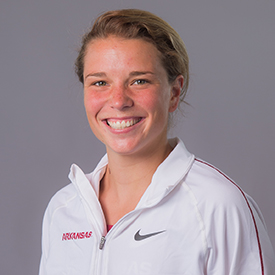 Kicked off her season sixth-place place finish at the UC Riverside Invitational (Sept. 16) with a time of 20:15.90, the best time for the Razorbacks… At the Notre Dame Joe Piane Invitational (Sept. 29), Hiltz ran a 16:55.10, the 26th time overall and second-best for Arkansas… At Pre-Nationals (Oct. 14), she ran a time of 20:15.20 which was the best time for the Razorbacks… At the SEC Championships, Hiltz ran a time of 20:49.50 placing 12th overall and helping Arkansas win the SEC Conference Title… In the NCAA South-Central Regional (Nov. 10) she earned All-Region honors with a time of 19:35.50 which finished her first overall, and helped lead Arkansas to a first place finish… In the NCAA Cross Country Championships (Nov. 18), Hiltz finished second for the Razorbacks at 20:37.20

Sophomore (2017)
NCAA indoor runner-up (pentathlon), Two-time first team All-American, SEC outdoor champion … Kicked off her 2017 indoor season running one of the best times (4:36.42) in the mile to win the Arkansas Invitational … Was the top collegiate finisher in the 1,500 and the mile at the prestigious Armory Invitational … Raced into the record books with the DMR, running the third-fastest time 10:57.93 in program history at the Alex Wilson Invitational … Scored seven points towards Arkansas’ SEC indoor victory with a fourth-place finish in the mile and a second place finish with the DMR … Qualified for nationals in the mile … Capped her indoor season finishing sixth in the mile at the NCAA Championships with a PR of 4:34.57 … Opened outdoor strong, placing second in the 1,500 at the Bryan Clay Invite … Captured the 1,500 title at the Payton Jordan Invitational and followed it up with a victory in the same event at the SEC Outdoor Championships … Hiltz raced to a top-four finish in the 800 at the conference meet shortly after her 1,500 gold-medal performance … Qualified for the NCAA Outdoor Championships in the 1,500 … Closed out the year as the national runner-up in the 1,500 … Hiltz also earned a berth to the USATF Outdoor Championships where she finished sixth in the 1,500 ahead of several professionals in a PR and program No. 2 time of 4:10.28.

Redshirt Freshman (2016)
First team indoor All-American (DMR) … Posted a fourth-place finish in the 800 at the Charlie Thomas Invitational (2/6) … Recorded a new PR in the mile of 4:38.27 at the Husky Classic (2/13) … Ran an NCAA indoor qualifying time with the DMR at the Alex Wilson Invitational (2/20) … Earned conference gold with the DMR at the SEC Indoor Championship (2/27) and placed sixth in the mile … Closed the indoor season, helping the DMR team clock a sub-11 minute performance and place fifth at the national meet … Ran a personal best in the outdoor 800 of 2:06.42 to place third at the Arkansas Twilight (5/6) … Followed that performance with another PR showing, running 4:20.21 in the 1,500 at the SEC Outdoor Championship (5/14) where she would finish eight overall in the event finals … Capped the year as the 17th-best performer in the 1,500 at the NCAA West Preliminary Round (5/28).

Personal
Born on Oct. 23, 1994 … Daughter of Tom and Liz Hiltz … Has one sister; Michaela … Majoring in sociology and criminal justice.