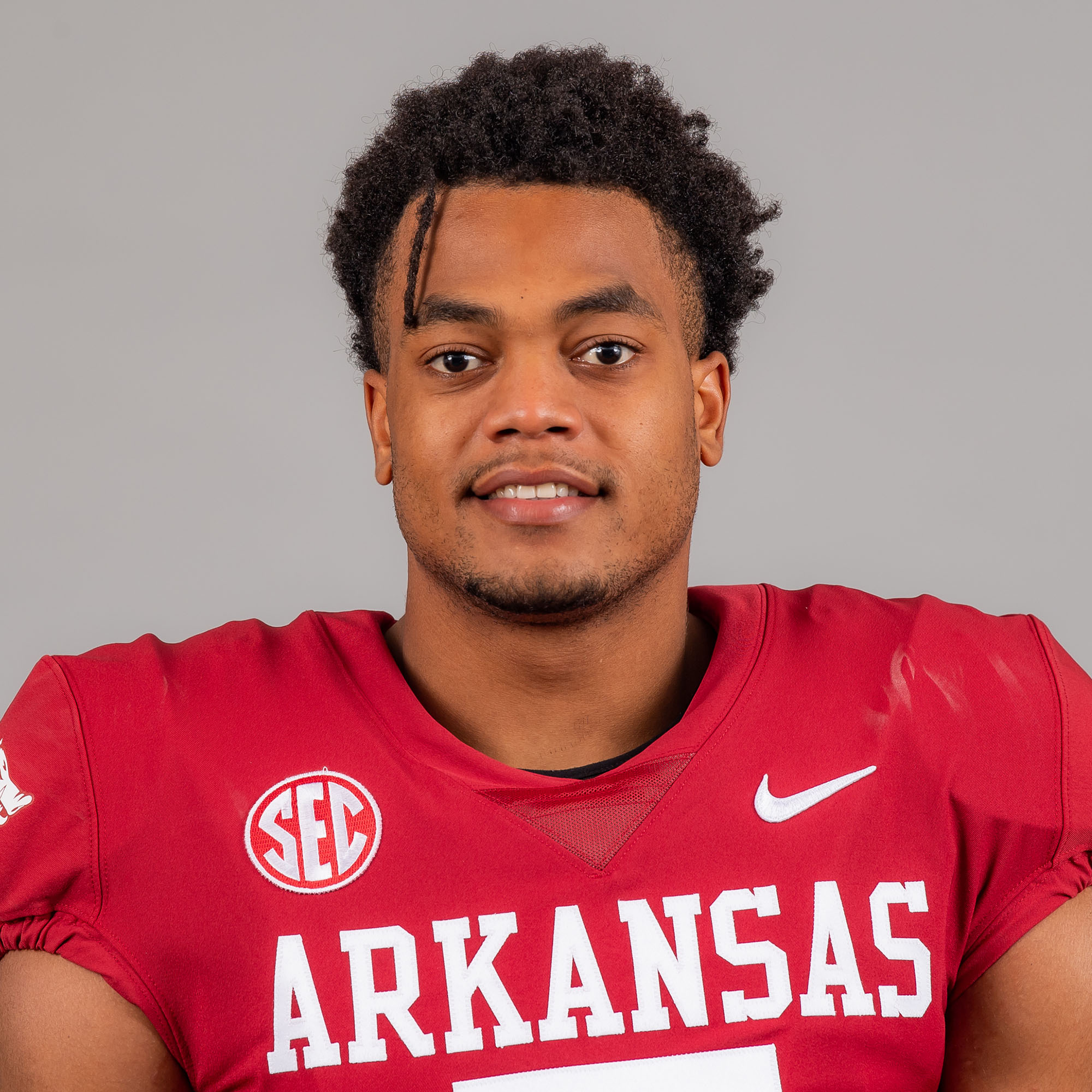 2020 (SENIOR): Doak Walker Award, Maxwell Award, Campbell Award watchlist and Reese’s Senior Bowl Top 250 honoree … Played in six games and made six starts, rushing 82 times for 309 yards (3.8 ypc) with three touchdowns and made 10 grabs for 33 yards (3.1 ypc) … Finished his Arkansas career averaging 5.81 yards per rush, sixth-highest in school history … His nine career 100+ yard rushing performances are tied for eighth-most in program history … Scored his first touchdown of the season on a one-yard rush in the win over Ole Miss (Oct. 17) … Ran for 100 yards and a touchdown at No. 8 Texas A&M while eclipsing 2,000 career rushing yards … Against the Aggies rushed for at least 100 yards in a game for the ninth time in his career … Ran a season-high 19 times for 65 yards in Arkansas’ win over Tennessee (Nov. 7) … Scored his third touchdown of the year on a 12-yard run at No. 6 Florida (Nov. 14).

2019 (JUNIOR): Earl Campbell Tyler Rose Award and Doak Walker Award Watch Lists honoree … Started all 12 games for the Razorbacks in the backfield at running back in 2019 … Totaled 476 snaps as a junior for Arkansas … Team’s leading rusher for the second consecutive season, racking up 1,133 yards on 184 carries, scoring eight times on the ground … First Razorback since Rawleigh Williams III (1,360) in 2016 to rush for 1,000 yards in a season … Ranked fourth in the SEC and 27th nationally with an average of 94.4 rushing yards per game and ninth in the conference with 6.2 yards per carry … Also hauled in 160 yards through the air on 19 catches … Ran for 100+ yards in five games, posting a season-high 185 yards against Western Kentucky on Nov. 9, his most rushing yards as a Razorback … His five 100+ yard rushing performances brought him to a total of eight over two years, making him one of 16 Razorback running backs in school history to do so … Opened the season with 114 rushing yards on 18 carries, scoring on a two-yard run in the third quarter … It was the most by a Razorback in a win since Nov. 4, 2017, vs. Coastal Carolina … Rushed for 67 yards on 17 carries at Ole Miss in the SEC opener on Sept. 7 … Tallied 122 yards on 20 attempts, scoring twice, against Colorado State on Sept. 14 … Found the end zone on scores of 59 yards and four yards in the game, 59-yarder was the longest to that point in the season by a Razorback … Amassed 92 yards on the ground in the first half, including the 59-yard TD … It was the most rushing TDs in a game by a Hog since David Williams had two against Missouri on Nov. 24, 2017 … Hauled in a season-high three receptions for 10 yards and ran for 91 on 18 carries against San Jose State on Sept. 21 … Finished the game against Texas A&M (Sept. 28) with 89 yards on 18 carries, running for 50 yards on seven attempts in the first quarter … Passed the 100-yard threshold again at Kentucky on Oct. 12, totaling a then-season high 134 yards on 15 carries with two more touchdowns … Took the second play of the game 74 yards to the house for his longest as a Razorback and the fastest score by the Hogs (0:42) of the season … It was the longest TD score since T.J. Hammonds’ 88-yard run against Coastal Carolina in 2017 … Racked up 106 yards on six carries in the first quarter, his most in a quarter since 104 vs. Ole Miss on Oct. 13, 2018 … Led the team in rushing (50 yards) & receiving (55 yards) against Alabama on Oct. 26, first RB to do so since Devwah Whaley at Missouri in 2018 … Back-to-back seasons to record 100+ all-purpose yards vs. the Crimson Tide … Posted the first of consecutive 100+ yard rushing games against Mississippi State on homecoming, totaling 114 yards on 11 carries, scoring on a 52-yard run … First Hog with 100 or more yards vs. the Bulldogs since Rawleigh Williams III (205) in 2016 … Picked up 80 of his 114 yards in the first half, doing so on six attempts … Season-high 185 yards on eight rushes, scoring twice from over 76 yards vs. WKU on Nov. 9 … Put him over the 1,000-yard mark for the year … Took his second rush of the game 76 yards for a touchdown in the first quarter … The TD run was a career-long that would only stand for a couple of quarters, scoring again the fourth quarter, this time from 86 yards … Marked five rushing TDs from 50+ yards … The pair of 76+ yard scores in the same game made him the first Hog to do so since at least 1997 … First Arkansas RB since Felix Jones in 2006 to have two touchdown runs of 76+ yards in the same season … Posted 95 yards on 21 attempts in the season finale against Missouri … Rushed the ball 14 times in the first half, the most since 19 against Tulsa on Oct. 20, 2018 … Posted offensive grades of 82.6 from Pro Football Focus against both Portland State and Western Kentucky, with three rushing marks over 80, two in both of those games and the third against Kentucky … Accounted for 1,133 of Arkansas 1,766 rushing yards in 2019.

2018 (SOPHOMORE): Played in all 12 games in his first season with the Razorbacks, starting each of the last eight in the backfield … Named Darren McFadden Running Back of the Year from the Little Rock Touchdown Club on Jan. 10 … Totaled 309 offensive snaps, according to Pro Football Focus … Recorded a team-best 123 attempts for 734 yards, averaging 6.0 per carry and 61.2 per game, with two touchdowns … Effective catching passes as well, hauling in 23 for 165 yards, ranking third in receptions … Led the team in all-purpose yards with 899, putting together a clip of 74.9 per game … Ranked 13th in the SEC in rushing yards and 10th in yards per carry … Rattled off the longest play from scrimmage all year against Ole Miss in Little Rock on Oct. 13 on a 69-yard touchdown run … Increased his total number of rushes in each of his first five games with a carry, opening the year with six and seven against Eastern Illinois and Colorado State, respectively … Broke out with eight carries for 66 yards on the road at Auburn on Sept. 22 … Also caught two passes for 39 yards against the Tigers … Followed it up with a 10 carry, 47-yard game on the ground with four catches and 33 yards against his former team Texas A&M in Arlington on Sept. 29 … Posted his first 100-yard rushing game as a Razorback against No. 1 Alabama on Oct. 6, totaling 102 yards on 15 carries … His performance against the Crimson Tide made him the first Razorback to record 100+ yards against Alabama since Darren McFadden’s 195 in 2007 … Only the 15th player since 2007 to rush for 100 or more yards and the fourth to average 6.8 or more yards per carry on more than 15 carries against Alabama … Also became the 20th player under head coach Chad Morris to record a 100-yard rushing performance … Carried that momentum into another 100-yard game against Ole Miss the following week, totaling 109 yards on seven carries, all coming in the first half, including his first touchdown of the year … First Razorback to rush for 100 yards in back-to-back games since Rawleigh Williams III in 2016 … Came one yard shy of his third consecutive 100-yard game against Tulsa, hitting 99 yards on 22 carries, but passed the threshold against Vanderbilt with 113 yards on 19 touches, recording his second touchdown of the year on a five-yard run in the first quarter … His three 100-yard performances make him the 38th Razorback with at least three over their Arkansas careers … Totaled 84 yards on 14 carries at Mississippi State on Nov. 17 and had five carries to finish up the season at Missouri … Turned in his best PFF grade against the Bulldogs with a 79.6 run mark and an overall grade of 78.3 for the contest … Part of a receiving corps that put up 2,307 yards through the air and 17 touchdowns, as well as a tailback unit that went for 1,721 rushing yards and 11 TDs.

PRIOR TO ARKANSAS: No. 3 JUCO running back nationally, according to 247Sports … Out of high school, was a four-star prospect by ESPN and Rivals, ESPN top 300 recruit, consensus top-25 running back with a best of No. 8 by Rivals … Rushed for 1,211 yards and 14 touchdowns in 10 games at Independence in 2017, posting 6.3 yards per carry … Averaged 121.1 yards rushing per game … Topped 100-plus yards on the ground in five games, highlighted by a 215-yard performance at Northeastern Oklahoma A&M College and a 303-yard effort against Coffeyville Community College … In the regular-season finale on Nov. 11, rushed for 303 yards and a touchdown on 34 carries … In the Midwest Classic Bowl on Dec. 3, had 215 yards and three scores on 35 carries and was named offensive MVP of the game … Logged a rushing touchdown in six games and multiple touchdowns in four games … Posted a season-high four rushing touchdowns against Ellsworth Community College … Rushed for 6,436 yards and 80 touchdowns in his high school career … Helped Stratford reach the state semifinals in 2013 and the regional quarterfinals in 2014 and 2015 … Named the District 19-5A Overall MVP as a senior in 2015 … Was the District 19-5A Co-MVP as a junior and ran for 2,519 yards and 29 touchdowns on 246 carries, averaging over 10 yards per carry in 2014 … Earned First-Team All-State honors from the Texas Sports Writers Association … Earned first-team all-district honors and Associated Press All-State Honorable Mention honors as a sophomore in 2013 … Rushed for 1,621 yards and 19 scores … Saw time on varsity as a freshman in 2012 … Coached by Eliot Allen at Stratford High School … Spent his freshman season at Texas A&M before transferring to Independence … Out of high school chose Texas A&M over Arizona State, Michigan, Missouri and Nebraska … Chose Arkansas over offers from Arizona State and Colorado.