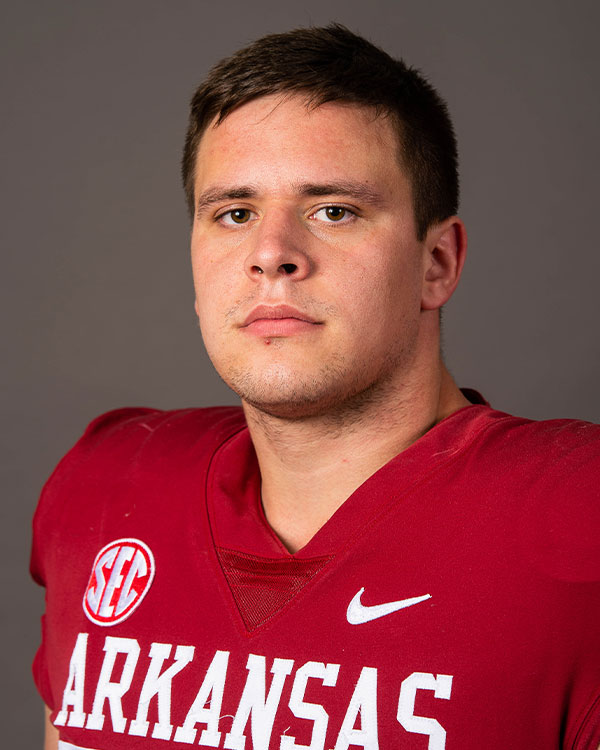 2021 (JUNIOR): Anchored Arkansas’ offensive line, starting all 13 games at center and blocking for an offense that led all Power 5 schools in rushing, averaging 227.8 yards per game … Named Second-Team All-SEC (AP) … Tabbed Third Team All-SEC (PFF, Phil Steele) … According to Pro Football Focus, totaled 873 snaps on the year … Only gave up three sacks all season … Penalized just eight times … Led the way for four Razorbacks to rush for at least 500 yards, something that had not happened at Arkansas since 1975 … Part of an offensive line that blocked for three games of 300+ yards of rushing (Texas, Ole Miss and Penn State) and two games of 600+ yards of total offense (Georgia Southern and Ole Miss) … Carded a 78.9 run blocking grade on the season … Recorded a season-high 85.0 offensive grade in win over Texas (Sept. 11) … Posted an 80.2 pass blocking grade in win over Georgia Southern (Sept. 18) … Held a season-high 81.0 pass blocking grade in victory against Mississippi State (Nov. 6).

2020 (SOPHOMORE): Played in nine games and made eight starts, seeing all of his action at center … According to Pro Football Focus, played 628 offensive snaps, the fourth most on the team and third most among offensive linemen … Also saw action on 13 special teams snaps … Played every offensive snap of the game seven times … Penalized five times … Totaled a 69.7 season run blocking grade, ranking second among Razorback offensive linemen … Allowed one sack on 355 pass blocking plays, posting six games with a pass blocking grade of 70-plus with a season-best 84.1 against Texas A&M (Oct. 31) … Logged a season-best 78.5 offensive grade against Missouri (Dec. 5) … Did not play in the season finale against Alabama (Dec. 12).

2019 (FRESHMAN): Started each of the last 11 games of the year, playing in all 12, with his first two starts coming at left guard and his final nine at right guard … Totaled 741 snaps as a freshman on Arkansas’ offensive line, according to Pro Football Focus, participating in every offensive play in five games … Did not allow a sack in 417 pass protection plays, recording three grades over 80.0 from PFF in the category, including a season-high 87.9 against Western Kentucky on Nov. 9 … Blocked for an offense that scored 28 times and racked up 4,081 total yards, including 2,315 passing yards, 1,766 rushing yards and 14 touchdowns both through the air and on the ground.

HIGH SCHOOL: Four-star prospect by 247Sports … Rated as the No. 19 offensive guard in the country and third overall prospect in the state of Oklahoma by 247Sports … Three-year varsity letterwinner at Union High School in Tulsa, Oklahoma … Played on both sides of the ball, but primarily on the offensive line … Helped the Redskins to a 9-3 record and a No. 4 state rank behind a semifinal berth in the 2018 Oklahoma High School Football Class 6A-I playoffs … District 6A-I-2 Offensive Lineman of the Year … Slotted at seventh overall in OKPreps 2019 Rankings heading into his senior season, as well as the top offensive lineman in the category … Propelled Union HS to an 11-2 mark as a sophomore and a state championship in 2016, as well as a 12-1 record as a junior, falling in the 6A-I title game in 2017 … CHOSE ARKANSAS OVER: Tulsa, Colorado State, North Texas, Utah State and others.