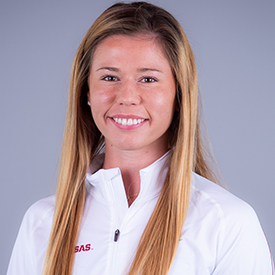 Personal
Born June 18, 1997 … Daughter of Simon and Tiffany Robinson … Has two siblings; Reagan and Kyle … Her father played for the Razorback tennis team from 1984-87, her sister plays volleyball for the Razorbacks and her brother, Kyle, is a member of the Razorback golf team … Pre-med biology major.