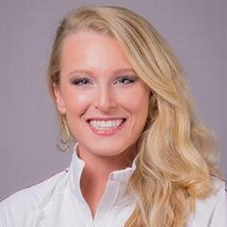 Redshirt Junior – Outdoor (2014)
Outdoor First Team All-American … Outdoor First Team All-SEC … Opened her 2014 campaign with a sixth place finish at the Clyde Littlefield Texas Relays … Followed that performance with two clearances well over 14 feet claiming back to back firsts at the Arkansas Spring and John McDonnell Invitationals … Finished first at the SEC Outdoor Championships with a mark of 4.50m/14-9 … Capped her season with a top-five finish at the NCAA Outdoor Championships vaulting to fourth place.

Prior To Arkansas (UNC)
She was a three-time All-America performer in the pole vault for the University of North Carolina for two seasons … As a sophomore, she had a final clearance of 13-7.25 at the NCAA Outdoor Championships to finish in 11th place … Had a third-place showing at the 2011 ACC Outdoor Championships … While at UNC, she had an indoor personal best of 13-10.5 and an outdoor best of 14-1.25 … The summer following her prep career, she won a national title in the pole vault at the 2010 USATF Junior Olympics in Sacramento.