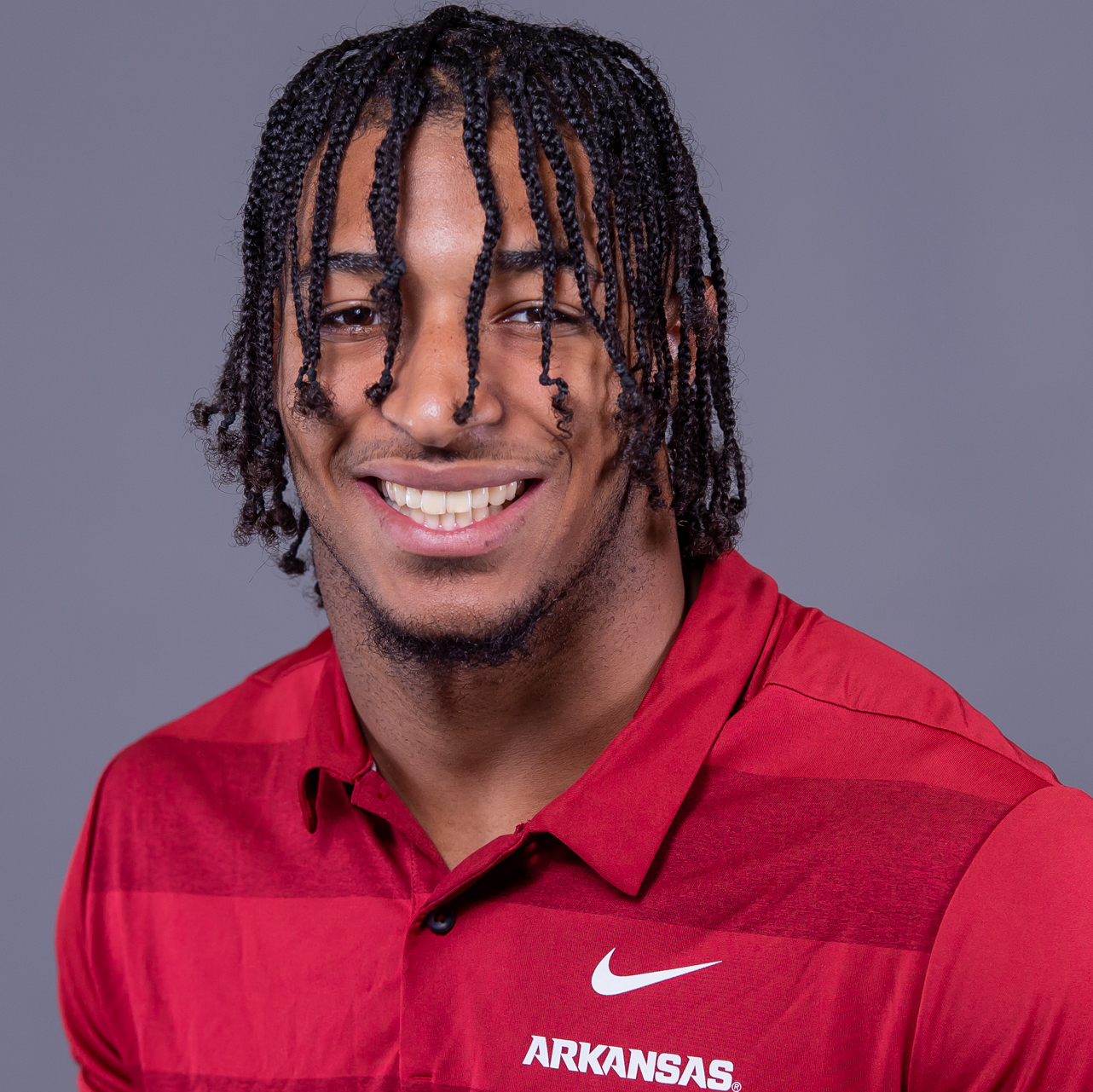 2018 (SENIOR): Started all 12 games of the year in his final season with the Razorbacks … Elected captain by his teammates … Eleven of his 12 starts came at the free safety spot, while sliding over to strong safety in the finale at Missouri … Totaled 910 snaps over his senior season, 778 coming on the defensive side of the ball … Finished second on the team in total tackles with 87, racking up 43 solo stops … Posted a half-a-tackle for loss and recovered a fumble against in the season opener against Eastern Illinois … Had six tackles, five solo, in that contest against the Panthers … Went on to record double-digit tackle performances in six of the next 11 games, leading the team in the game at Mississippi State on Nov. 17 in Starkville … Found the double-digit tally with 10 at Colorado State in week two with six solo tackles … Put up back-to-back games with 10 or more tackles against Texas A&M in Arlington (Sept. 29) and Alabama (Oct. 6) with 10 and 12, respectively … His 12 was a season-high total … Notched double-digit marks in three of the next four games, with 10 coming against Tulsa (Oct. 20) on Homecoming, 10 against LSU (Nov. 10) on senior night and 11 at Mississippi State (Nov. 17) … Consistently posted high tackling grades, finding his way above 80.0 in six games (PFF), including four-straight games with marks of 86.4 (CSU), 80.7 (UNT), 82.5 (AUB) and 84.3 (TAMU) … Improved his season-best tackling marks against Tulsa (87.3) and followed it up with an 87.4 in his final game at DWRRS vs. LSU … Also recorded an 85.1 grade in run defense for a 2018-best 77.5 overall defensive mark against the Tigers … Began the year with preseason All-SEC third team honors from the conference coaches … Wrapped his Arkansas career with 2,422 defensive snaps played, 228 tackles, five forced fumbles, three interceptions and two fumble recoveries.

2017 (JUNIOR): A hard hitting-safety who was voted a team captain … Finished third on the team and first among defensive backs in tackles (63) … Tied or led the team in tackles in two games … Led the team and tied for fourth in the SEC in forced fumbles (3) … Tied for the team lead in pass breakups (8) … Broke up multiple passes in two games … One of only three players in the FBS in 2017 to record at least 60 tackles, an interception, eight pass breakups and three fumbles forced … Recorded eight or more tackles five times … Enters his senior season with five career fumbles forced, the most by an Arkansas player since Tenarius Wright’s five from 2008-12 … vs. No. 23 TCU (Sept. 9): Showcased his ball-hawking abilities as he racked up a then-career high eight total tackles, picked off one pass, forced a fumble and also broke up a pass … vs. New Mexico State (Sept. 30): Recorded a team-high tying five tackles (all solo), including 1.0 for loss, a forced fumble and two pass breakups … at South Carolina (Oct. 7): Matched his then career-high in tackles (8) at South Carolina to eclipse 100 for his career … at Ole Miss (Oct. 28): Finished the day with a career-high in tackles (10) … Forced and recovered a key fumble and broke up a pass in the thrilling 38-37 win …  Made one of the biggest plays of the season when he chased down a receiver and plucked the ball loose at Arkansas’ 30-yard line with 8 minutes and 30 seconds remaining in the second quarter and Arkansas trailing 31-7 to set up a Razorback touchdown on the following drive.

2016 (SOPHOMORE): Started seven of 12 games played … Totaled 43 tackles (30 solo) and returned one interception 24 yards for a touchdown … Forced two fumbles and broke up two passes … Tallied a tackle in 10 of 12 games played and made five or more stops six times … vs. Louisiana Tech (Sept. 3): Matched a career high and tied for the team lead in tackles (7) in the start at strong safety … at No. 15 TCU (Sept. 10): Started at strong safety and recorded five solo stops … Helped shut out TCU in the first half and hold the Horned Frogs to only a touchdown through the first three quarters … vs. No. 10 Texas A&M (Sept. 24): Made his fourth straight start at strong safety … Collected five tackles and caused Texas A&M wide receiver Christian Kirk to fumble a punt return on the game-opening drive … His forced fumble led to the Razorbacks’ first TD two plays later and less than three minutes into the game … vs. No. 12 Ole Miss (Oct. 15): Delivered a huge hit on Ole Miss quarterback Chad Kelly that forced a fumble out of bounds during a fourth-down scramble late in the fourth quarter to secure the victory … Finished with four tackles and a pass breakup … vs. No. 11 Florida (Nov. 5): Returned an interception 24 yards for the opening touchdown … Helped hold the Gators to 241 yards of total offense, including a season-low 12 yards rushing on 14 carries.

2015 (REDSHIRT FRESHMAN): Started 3 of 12 games played … Totaled 35 tackles and one interception … 22 of 35 tackles were solo stops … Recorded a tackle in 11 of 12 contests … vs. No. 14 Texas A&M (Sept. 26): Made the first start of his career … Had three tackles and broke up two passes … at Tennessee (Oct. 3): Tallied a career-high seven tackles, all solo, in his second career start … at No. 8 Alabama (Oct. 10): Earned his third straight start … Recorded his first career interception with 2:26 left in the first half, which set up a Razorback touchdown three plays later.

HIGH SCHOOL: Three-star prospect according to ESPN, Rivals, Scout and 247Sports … Earned a scouting grade of 88 and ranked as the No. 28 prospect from Louisiana and the No. 49 safety in the nation by 247Sports … Rivals ranked him 26th in Louisiana and the No. 50 cornerback in the country … Named first-team all-state, first-team all-district and first-team all-city as a senior after making 88 tackles and 10 interceptions and helping Evangel Christian to a 10-2 record that included an undefeated season in district play … The Eagles won the District 1-3A championship and advanced to the Division II state semifinals … As a junior, he made 76 tackles, four interceptions and 10 pass breakups and was a first-team all-state selection … In his sophomore year he recorded 33 tackles and grabbed two interceptions … Also played basketball and ran track … Coached by Byron Dawson … Chose Arkansas over offers from LSU, Baylor, Memphis, Southern Miss and Air Force.