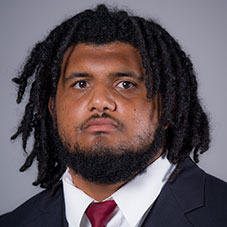 Started all 13 games at left guard and 24 straight contests to close his career … Allowed one sack on the season to help Arkansas lead the SEC in fewest sacks allowed for the third straight season … Earned an 80 percent offensive grade in 10 of 13 games … Led the team with 75 knockdowns while committing just one penalty over 901 plays … Paved the way for running back Alex Collins to run for over 1,500 yards and become just the third player in SEC history with three straight 1,000-yard campaigns to begin his career … Collins tied for the SEC lead with 10 100-yard rushing games, equaling Darren McFadden’s program single-season record … Arkansas led the SEC with five 200-yard rushing games in league play and had a total of eight on the year … vs. Texas Tech (Sept. 19): Graded out at a season-best 91 percent with nine knockdowns … at Tennessee (Oct.3): Helped pave the way for 250 yards rushing on 50 carries for Arkansas’ first win in Knoxville since 1992 … Named SEC Offensive Lineman of the Week on Oct. 5 … vs. Auburn (Oct. 24): Earned a 90 percent grade with eight knockdowns as Arkansas had over 200 yards on the ground and in the air en route to seven touchdowns … at No. 19 Ole Miss (Nov. 7): Finished with nine knockdowns while protecting Brandon Allen during a 33-for-45 performance for 442 yards and six touchdowns.

Junior (2014)
Appeared in all 13 games and started 11 at left guard … Launched a Heisman Trophy campaign after throwing a touchdown pass on a fake field goal … Saw action in over 690 snaps, allowing no sacks and was only penalized four times … Averaged an offensive grade of 79 percent, tied for second-best on the team … Blocked for RBs Alex Collins and Jonathan Williams, who were the only FBS teammates to each rush for 1,000-plus yards in the 2014 season … Helped protect QB Brandon Allen as the offensive line led the SEC with 14 sacks allowed … vs. Nicholls (Sept. 6): Earned a season-high 95 percent offensive line grade … vs. Texas Tech (Sept. 13): Collected a season-high seven knockdown blocks with a grade of 90 percent as the Razorbacks gained more than 400 yards on the ground in the non-conference road win … vs. UAB (Oct. 25): Caught the college football world’s attention when he tossed a touchdown pass to Arkansas’ long snapper on a fake field goal … vs. No. 20 LSU (Nov. 15): Tied for a season-high seven knockdowns and graded out at 82 percent in the shutout over the Tigers … vs. No. 8 Ole Miss (Nov. 22): Registered five knockdown blocks in the Razorbacks’ second consecutive shutout over a ranked opponent.

Sophomore (2013 at Iowa Western CC)
Ranked as a four-star by 247Sports.com, the No. 1 junior college prospect in Iowa, the No. 8 junior college offensive tackle in the country and the 29th-best junior college prospect in the nation … Ranked 63rd in the Rivals.com junior college top 100 … ESPN ranked him as the country’s No. 11 junior college offensive tackle … Earned first-team all-conference honors in 2013 after helping the Reivers win the Midwest Football Conference championship and a No. 2 final ranking following a defeat of Butler in the Graphic Edge Bowl … Coached by Scott Strohmeier … Selected Arkansas after receiving multiple scholarship offers from schools including Oklahoma, Florida, Texas Tech, TCU and South Florida.

Redshirt Freshman (2012 at Nevada)
Saw action in 10 games with four starts in 2012, helping the Wolf Pack to the New Mexico Bowl.

Freshman (2011 at Nevada)
Worked with the Wolf Pack scout team while redshirting.

High School
Helped lead Cajon High School to a league championship as a junior and was twice a first-team all-league selection, adding first-team all-county honors as a senior … Coached by Kim Battin.

Personal
Born on May 1, 1992 … Son of Mary Tretola … Majoring in American studies.