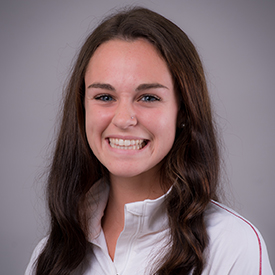 Redshirt Freshman (2016)
Opened up the season with a fifth-place finish in the 3K at the Gladstein Invitational (1/22) … Ran a personal best in the mile of 4:50.66 to place 10th in the event at the Charlie Thomas Invitational (2/6) … Followed that performance up with a 3K PR of 9:31.87 at the Husky Classic (2/13) … Finished 11th overall in the 3K at her SEC Indoor Championship debut … Kicked off the outdoor season placing first in the 3K at the Arkansas Spring Invitational (3/26) … Ran a 5K personal best of 16:36.99 at the Stanford Invitational to finish 14th in the competitive field … Closed the year with a 12th-place finish in the 5K at the SEC Outdoor Championship.

Freshman (2014)
Redshirted during her first season on campus.

High School
A four-year letter winner at Marcus High School in Flower Mound, Texas … Earned all-state honors as a junior … Individual district champion in cross country as a junior … Helped her team qualify for the state championships in cross country twice … Finished fourth in the mile at track regionals … Holds the school record for the DMR and 4×800-meter relay … Holds personal-best of 10:41 in the 3,200m, 4:57 in the 1,600m and 17:52 in the 5k.

Personal
Born on Jan. 24, 1996 in Miami, Fla. … Daughter of Britt and Laura Brown … Has two siblings, Chase and Payton … Father is an athletic trainer for the Dallas Cowboys and her mother ran cross country and track for Texas Christian University … Majoring in education.