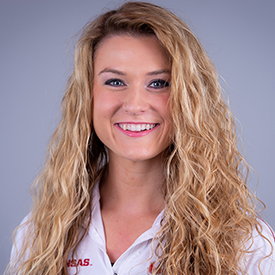 Redshirt Freshman (2016)
Competed in one meet this season … Posted a top-10 finish in her first competition as a Razorback, placing seventh at the Arkansas Twilight in the 100 in a collegiate PR of 12.57.

Freshman (2015)
Utilized a redshirt her first year on campus.