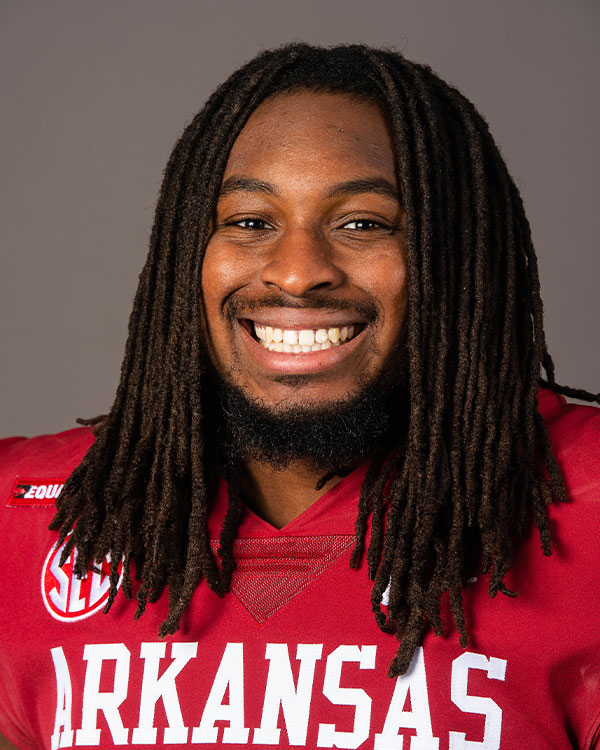 2021 (JUNIOR): Played in 12 games catching 20 passes for 141 yards and a touchdown, averaging 7.0 yards per catch … Recorded six games with multiple receptions … Totaled a season high five receptions for 37 yards and a score at Ole Miss (Oct. 9) … Caught four passes for 26 yards in victory over Mississippi State (Nov. 6) … Finished with three receptions for 10 yards in road win at LSU (Nov. 13) … Registered four catches for 47 yards, averaging 11.8 yards per catch with a long of 16 at Alabama (Nov. 20) … Finished with two receptions for 10 yards in win against Missouri (Nov. 26) … Made two catches for 11 yards in Outback Bowl victory over Penn State (Jan. 1).

2020 (SOPHOMORE): Played in all 10 games and made six starts, recording seven catches for 70 yards (10.0 ypc) … Recorded season-highs of three catches for 31 yards in the win at Mississippi State (Oct. 3) … Hauled in a season-long catch of 22 yards at Missouri (Dec. 5) … Made a reception in the final three games of the season against LSU (Nov. 21), Missouri (Dec. 5) and Alabama (Dec. 12) … According to Pro Football Focus, saw action in 228 offensive snaps and 25 special teams snaps … Tallied a 66.1 single-game offensive grade against Mississippi State, his highest of the year.

2019 (FRESHMAN): Started all 11 games he played at wide receiver as a freshman for the Razorbacks in 2019 … Saw most of his snaps (512) out wide with 21 coming in the slot and four lined up in the backfield according to Pro Football Focus … Hauled in 28 passes for 385 yards, scoring three times, averaging 13.8 yards per catch and 35.0 yards per game … Ranked third among SEC freshman receivers in yards (385), yards per catch (13.8), receptions per game (2.5) and yards per game (35.0) … Was third on the team in receiving yards … Totaled 96 yards after catch … Caught one pass in the season opener vs. Portland State for 38 yards … Racked up a team-best six catches and 88 yards in the conference-opening game at Ole Miss on Sept. 7 … Had a 49-yard reception in the contest, which was the longest play from scrimmage for the second consecutive game and the longest reception by a true freshman since Hunter Henry’s 52-yard catch against Texas A&M (Sept. 28, 2003) … Added six more catches for 90 yards against Colorado State, scoring his first touchdown on a 24-yard pass from Nick Starkel in the first quarter … Hauled in another touchdown the following week against San Jose State, with a season-high eight receptions on 83 yards … Scored on an eight-yard pass from Starkel in the fourth quarter to tie the game … Posted his best receiving grades from PFF against the Spartans, with an 84.0 mark and a total offensive grade of 85.3 in the game … One of three Razorbacks to record a touchdown catch in back-to-back games in 2019 … Returned from injury to catch two passes for 24 yards against Kentucky (Oct. 12) and three for 34 yards vs. Auburn (Oct. 19) … Only tallied two receptions over the final five games, one against Mississippi State (Nov. 2) for nine yards and a 19-yard TD catch vs. Missouri (Nov. 29) in the season finale … Part of an offense that recorded 2,315 passing yards and 14 touchdowns through the air.

HIGH SCHOOOL: Four-star prospect by Rivals, 247Sports and ESPN … Ranked as the No. 16 wide receiver in the country and the No. 4 player in the state of Tennessee by Rivals … Rated 274th in ESPN’s Top 300 in this year’s recruiting class … Four-year varsity letterwinner at Blackman High School in Murfreesboro, Tennessee … Racked up 558 receiving yards on 35 receptions and four touchdowns in 10 games for the Blaze, averaging 16.1 yards per catch … Also rushed for 301 yards on 34 carries with five TDs … Played on both sides of the ball, recording 19 tackles, 12 solo, with five for loss and three sacks … Helped Blackman HS to a 10-2 record and a second round berth in the 2018 Tennessee High School Football Division I Class 6A playoffs … Led the team in receiving as a junior with 667 yards on 52 receptions, scoring five times in 12 contests in 2017 … Propelled the Blaze to a 9-3 season and a second round appearance in the Tennessee state Division I Class 6A tournament … Posted a career-best 669 receiving yards on 54 catches and 10 touchdowns, all the best marks among Blackman HS receivers … CHOSE ARKANSAS OVER: Auburn, Florida, Kentucky, LSU, Mississippi State, Ole Miss, South Carolina, Tennessee, Vanderbilt, Clemson, Notre Dame, Ohio State, Penn State and others.