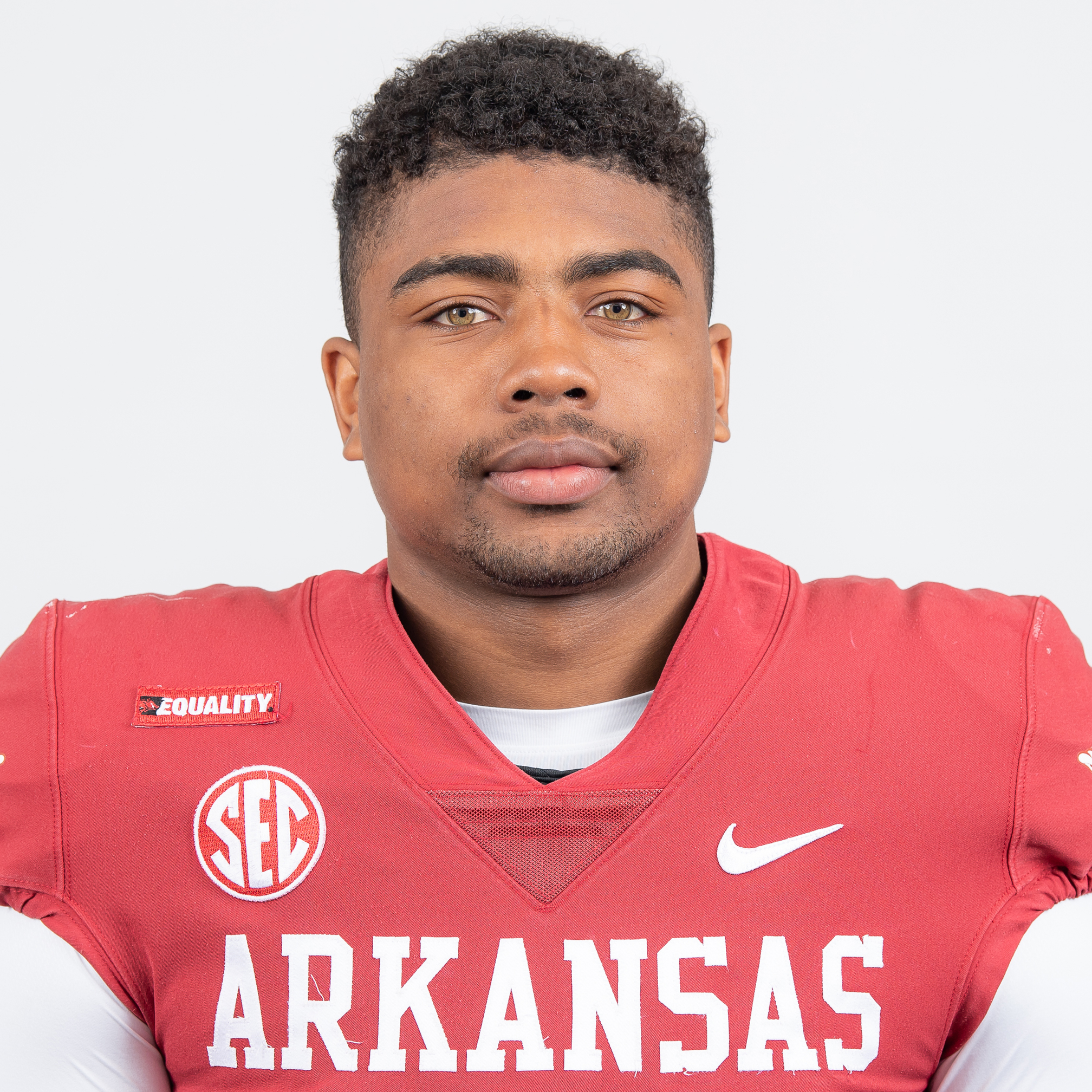 2021 (JUNIOR): Cemented his status as one of the greatest Arkansas wide receivers in school history with 66 catches for 1104 yards and 11 TDs to earn First-Team All-SEC honors … Became the fourth Razorback pass catcher in Arkansas history to post a 1,000 receiving yard season and first since 2012 … Posted an overall offensive grade of 85.8 on PFF with a team-high 91.0 passing grade … Caught five passes for 42 yards in season opener vs. Rice (Sept. 4) after missing the last two weeks of preseason camp … Added five passes for 37 yards in win over Texas (Sept. 11) … Notched his first 100-yard game of the season with 127 yards on three catches, including a 91-yard touchdown, against Georgia Southern (Sept. 18) … Posted his second straight 100-yard game in Southwest Classic victory over Texas A&M (Sept. 25), catching six passes for 167 yards, including an 85-yard TD … Caught three passes for 10 yards at Georgia (Oct. 2) … Recorded his third 100-yard game with seven catches for 136 yards and a TD at Ole Miss (Oct. 9) … Posted his fourth 100-yard game in his last five with nine receptions for 109 yards and two scores against Auburn (Oct. 16) … Ran for 56 yards, including a 49-yard touchdown, in win over UAPB (Oct. 23) to go along with 89 yards on four catches … Gained 63 yards on five catches and added 39 yards rushing in win over Mississippi State (Nov. 6) … Caught four passes for 16 yards in win at LSU (Nov. 13) … Racked up a season-best 179 yards receiving on eight catches and matched a career-best with two TDs at Alabama (Nov. 20) … Set a school record with his sixth 100-yard game of the season with 179 yards on seven catches in Battle Line Rivalry win over Missouri (Nov. 26).

2020 (SOPHOMORE): Played and started in nine games … Led the team with 51 catches, 820 yards (16.1 ypc) and seven touchdowns to set new career-best marks … Also returned one punt for four yards … Finished third in the SEC averaging 91.1 receiving yards per game and fifth in total receiving yards, despite missing one game … One of only two FBS receivers, joining Florida’s Kadarius Toney, to log 800+ receiving yards and 70+ rushing yards … Accrued six games of 90+ receiving yards and four games of 100+ receiving yards … First Arkansas receiver to record four 100+ yard receiving games in the same season since Cobi Hamilton in 2012 … Tied Boo Williams (1999-00) as the fastest Razorback receiver (18 games) to reach 1,000 career receiving yards since 1997 … Made five grabs of 40+ yards, tied for ninth-most in FBS … Totaled four catches of 50+ yards, tied for sixth-most in FBS … Posted first 100+ yard receiving game, making seven receptions for 102 yards in the season opener against Georgia (Sept. 26) … Hooked up with QB Feleipe Franks for a 49-yard touchdown reception on the second drive of the game, the first scoring reception of his career, giving Arkansas a 7-0 lead … Played in just 12 first half offensive snaps at Mississippi State (Oct. 3) due to injury, and missed the following week’s game at Auburn (Oct. 10) … Returned from injury making a career-high 11 catches for 137 yards with a touchdown, which was the No. 1 play on SportsCenter, and rushed for a career-high 46 yards in the win over Ole Miss (Oct. 17) … Recorded one of only six games by a Razorback since 1997 with 10+ receptions for 100+ yards and a touchdown … One of three FBS players to record 130+ receiving yards and 40+ rushing yards in the same game this season … First Razorback receiver to make at least 11 catches since Cobi Hamilton in 2012 against Texas A&M … His 7-yard touchdown reception in the fourth quarter extended Arkansas’ lead to 26-14 … Recorded a career-long rush of 18 yards … Made seven catches for 117 yards and two touchdowns at Texas A&M (Oct. 31), his second straight 100+ yard receiving game … Hauled in a 6-yard touchdown reception on the team’s opening drive and scored on a 16-yard catch in the fourth quarter … Recorded the first two touchdown game of his career and became the first Razorback to log back-to-back 100+ receiving yard games since Keon Hatcher in 2016 … Made five receptions for a game-high 95 yards and scored a touchdown for the third straight week in the win over Tennessee (Nov. 7) … Became the first Razorback to record a receiving touchdown in three straight games since Jonathan Nance in 2017 … Scored on a 57-yard catch in the third quarter, extending Arkansas’ lead to 21-13 … Caught three passes for 47 yards at Florida (Nov. 14) … Hauled in five catches for 90 yards and a touchdown against LSU (Nov. 21) … Scored his sixth touchdown of the year on a 65-yard grab in the first quarter … Turned in a performance for the record books at Missouri (Dec. 5), making 10 catches for 206 yards with a touchdown, while also rushing three times for 14 yards … Tallied the fifth-most single-game receiving yards in program history and the most since Jarius Wright totaled 281 yards against Texas A&M in 2011 … Scored his seventh touchdown of the year on a 68-yard reception in the second quarter, the longest of his career, tying the game at 13 … Registered the most receiving yards by a Razorback receiver in the all-time series against Missouri … Caught two passes for 16 yards in the season finale against Alabama (Dec. 12) … According to Pro Football Focus, played 515 offensive and 38 special teams snaps … Set a season-high offensive grade against Ole Miss (84.7) and season-high receiving grade (88.2) against Missouri.

2019 (FRESHMAN): Played in 11 games, starting nine as a freshman for the Razorbacks at wide receiver … Used in every aspect of the offense – receiving, rushing, throwing – plus as a returner on special teams … Lined up primarily in the slot with 361 snaps at the position, according to Pro Football Focus, with 62 coming out wide … Totaled 488 plays, also seeing time on Arkansas’ punt and kickoff return formations … Hauled in 29 passes for 475 yards, leading the team in receiving yards … Averaged 16.4 yards per catch and 43.2 yards per game, both ranking second among conference freshmen … Team’s main punt returner, fielding 12 punts for 130 yards, averaging 10.8 yards per return … Also used on kickoff returns, taking 10 back for 226 yards for an average of 22.6 yards per kickoff return … Finished second on the team in all-purpose yards with 866, averaging 78.7 per game … Recorded multiple receptions in eight games … Opened the season with three catches for 52 yards against Portland State (Aug. 30), with a long of 20 yards … Also returned two punts for 16 yards … Had two receptions for 28 yards and two punt returns for 28 yards in the SEC opener at Ole Miss on Sept. 7 … Posted a season-high four catches and 92 receiving yards the following week against Colorado State, with two of his receptions going over 20 yards, giving him a total of five 20+ yard catches through three games … Missed the San Jose State game, but returned to put up four receptions for 58 yards against Texas A&M in Arlington on Sept. 28 … Also had a 32-yard punt return in the game that set up Arkansas’ go-ahead touchdown in the second quarter … Hauled in two passes for 25 yards at Kentucky and returned a punt 26 yards that put the ball at the Wildcat 29-yard line, propelling the Hogs to a touchdown for a 20-17 lead in the fourth quarter … Had three receptions for 28 yards vs. Auburn (Oct. 19) and one for 15 yards at Alabama (Oct. 26) … Made his debut as a kickoff return man against Mississippi State, racking up 134 return yards on five kickoffs, with a returns of 20, 38 and 42 yards in the game … It was the most kickoff return yards by a Razorback since De’Vion Warren’s 141 vs. Ole Miss on Oct. 28, 2017 … Brought in one pass for 32 yards from KJ Jefferson, setting up a touchdown for the Hogs in the fourth quarter against Western Kentucky … Recorded five receptions for 59 yards vs. WKU, a punt return for 18 yards and two kickoff returns for 29 yards … Totaled 80 yards on three catches at LSU on Nov. 23, with receptions of 31 and 38 yards in the game … Finished the year with a catch (six yards) and two kickoff returns (47 yards) against Missouri in Little Rock … Posted four PFF overall offensive grades of 70.0 or higher, with a best of 77.0 against Colorado State, with his best receiving grade over the year also coming in the contest at 75.8 … Part of an offense that finished with 4,081 total yards and 28 touchdowns, including 2,315 yards and 14 scores through the air.

HIGH SCHOOL: Four-star prospect by Rivals, 247Sports and ESPN … Rated as the top player in the state of Arkansas by 247Sports … Slotted as the No. 11 wide receiver in the nation and is listed at 82nd in the ESPN’s Top 300 in this year’s recruiting class … Four-year varsity letterwinner at Warren High School in Warren, Arkansas … Also lettered in basketball and baseball … Hauled in eight catches for 244 yards, scoring four times in his senior season … Went 4 of 7 passing, throwing for 137 yards and three touchdowns, while also returning three punts for 88 yards … Played on both sides of the ball, tallying 17 tackles with one sack, two forced fumbles and a fumble recovery … Joins a long list of Razorbacks to come from Warren HS, including December signee Marcus Miller … Racked up 1,090 receiving yards and 12 touchdowns on 45 catches as a junior for the Lumberjacks in 2017 … Was also a force in the running attack for Warren HS, rushing for 936 yards on 114 carries, scoring 27 touchdowns en route to 13-2 mark and a berth in the Arkansas 4A state championship game last year … Closed his high school career with 151 receptions for 3,403 yards and 43 touchdowns … CHOSE ARKANSAS OVER: Auburn, LSU, Ole Miss, South Carolina, Florida State, Michigan and others.