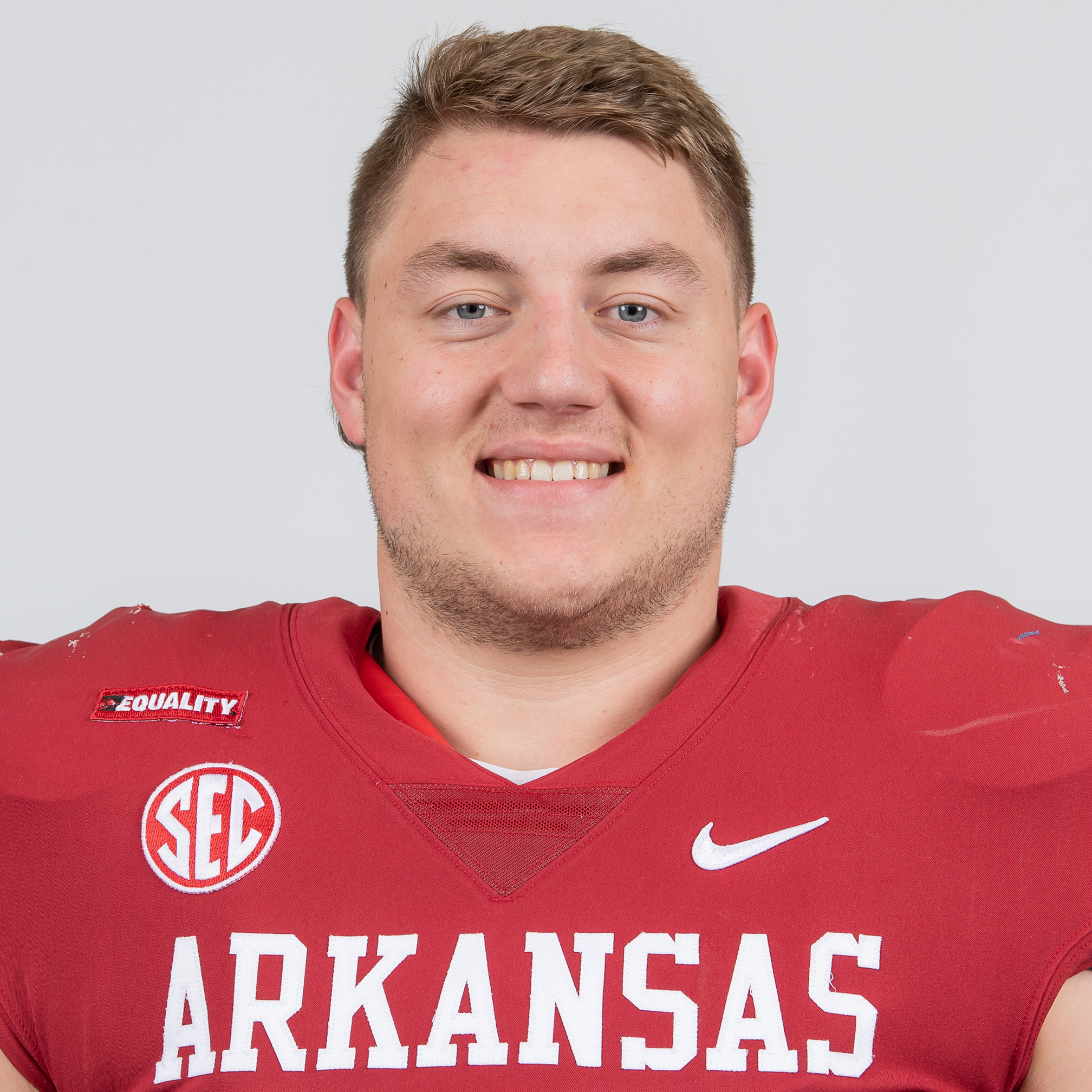 2019 (JUNIOR): Started all 12 games at center for the Razorbacks in 2019, appearing in 767 total plays, the most of any Arkansas player … Played every offensive snap in five of the first six games, missing one in weeks three & eight, as well as the season finale against Missouri … Did not allow a sack in 443 pass protection plays, with only two quarterback hits in 2019 … Posted PFF grades of over 76.0 in pass blocking in five games, including three of the first four, hitting a high of 80.5 against Portland State on Aug. 30 … Put together his top overall offensive grade from the outlet with a 77.3 against Colorado State on Sept. 14 … Blocked for an offense that scored 28 times and racked up 4,081 total yards, including 2,315 passing yards, 1,766 rushing yards and 14 touchdowns both through the air and on the ground.

2018 (SOPHOMORE): Played in all 12 games for the Razorbacks in 2018, starting each of the last 11 contests on the offensive line … Appeared in the season opener, but started at left guard against Colorado State and North Texas before finishing out the year as the team’s center … Totaled 674 snaps on the line, with 366 coming in pass protection, according to Pro Football Focus … Finished fourth on the team in total snaps played, with games over 70 on five different occasions, putting up season-highs of 74 at Auburn (Sept. 22) and at home against Alabama (Oct. 6) … Began the year with an 84.7 offensive grade from PFF, including an 83.3 mark in run blocking … Racked up grades over 80.0 in pass protection twice, grading out at 84.6 against Ole Miss in Little Rock (Oct. 13) and a season-best 86.8 at Mississippi State (Nov. 17) … Almost tripled his time spent on the field from his freshman year, where he played just 230 snaps on the offensive line … Helped the Arkansas offense to 4,028 yards of total offense and 28 touchdowns, with 2,307 yards and 17 scores coming through the air.

2017 (FRESHMAN): Played in seven games overall, including starts in the first four at right guard … Saw action in 230 snaps, including 115 in pass protection … Earned a 77.6 overall grade from Pro Football Focus … Did not allow a sack on the year … Allowed only two quarterback hits and five quarterback hurries … Committed only one penalty … Credited with a 79.9 run-blocking grade by PFF … Became the first true freshman offensive lineman to start a season opener since Mitch Smothers, who started at left tackle in 2011 … vs. Florida A&M (Aug. 31): Started at right guard and allowed zero pressures on 24 pass-blocking attempts in his debut … Earned a season-high 87.4 game grade by PFF … vs. No. 23 TCU (Sept. 9): Posted his best pass-blocking grade of the year (82.3) by PFF in his second career start at right guard … Totaled 58 snaps, including 34 in pass protection … Allowed only one pressure.

HIGH SCHOOL: A three-star recruit according to 247Sports … Rated the No. 15 offensive guard in the state of Arkansas … A three-year varsity letter winner and two-year starter who helped Fayetteville High School become one of state’s top offenses … Helped Fayetteville High School to two-consecutive Class 7A state titles his junior and senior years … Served as a team captain in 2016 … Tabbed the Class 7A All-State Outstanding Offensive Lineman … Named to the Arkansas Democrat-Gazette All-Arkansas Preps first team … Earned Class 7A-West All-Conference honors in both 2015 and 2016 … Named to the KURM Radio 2016 Dream Team … Coached by Bill Blankenship … Member of USA Football’s International Federation of American Football (IFAF) Under-19 World Championships team in China … Member of the track and field team … Chose Arkansas over Cincinnati, Kansas, Tulsa, Air Force, Arkansas State and others.

PERSONAL: Born on May 7, 1999 … Son of Jennifer and Josh Clary … Has one sister, Emma … Mother, Jennifer, was a member of the swim team at John Brown University from 1995-96 … Father, Josh, played soccer at John Brown University from 1992-96 and went on to earn his master’s degree at the University of Arkansas in 2000 … Grandfather, Larry Clary, played cornerback at Arkansas A&M from 1966-70 … Aunt, Sarah Clary Rogers, played soccer at University of the Ozarks from 1996-2000 … Undecided on a major.