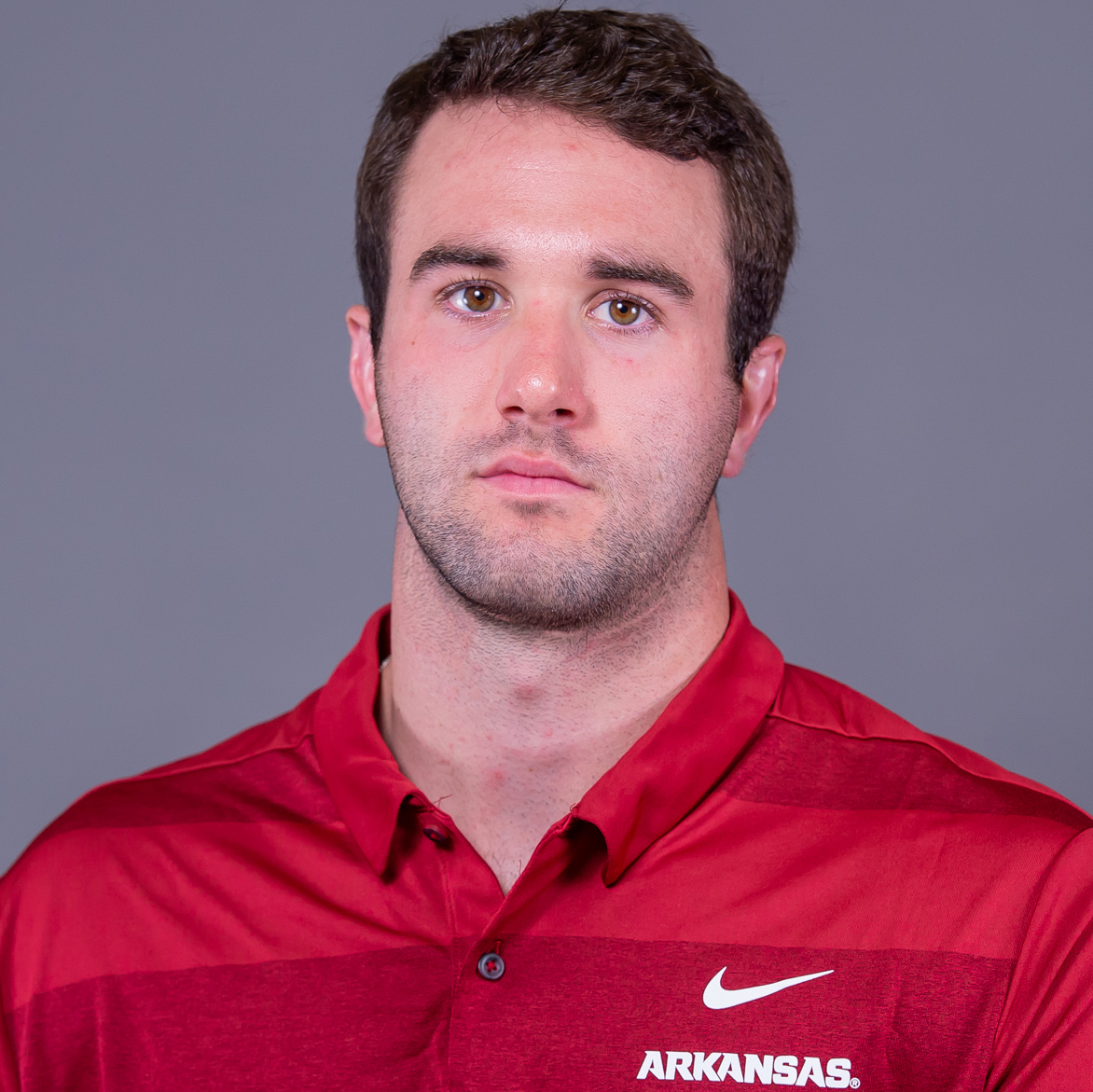 2018 (JUNIOR): Played in 10 games for the Razorbacks in 2018, starting nine at quarterback … Totaled 530 snaps over the course of his junior season, according to Pro Football Focus … Tallied 1,584 yards through the air on 143-of-250 passing, throwing 11 touchdowns with a passing efficiency of 116.94 … Also rushed 146 yards and a touchdown, crossing the goal line on the ground in the season opener vs. Eastern Illinois … Went 12-of-17 passing against the Panthers, racking up 261 yards and three touchdowns in the contest … Hit his longest pass of the year in the game, connecting with Jordan Jones for a 57-yard TD, finishing with a season-best passing efficiency of 257.79 … The first of two games he would finish with a 70.0+ passing percentage (70.6), also doing so against Ole Miss (75.0) as part of a 12-for-16 night in Little Rock … His 261 passing yards vs. EIU also stood as a high for the 2018 season and was one of four times he passed for 200+ yards in a game … Put up 230 passing yards vs. Alabama on a 25-of-39 day, throwing for two touchdowns, the first to Cheyenne O’Grady on an eight-yard play in the first quarter, then in the final frame to De’Vion Warren on a 17-yard pass … Recorded 240 passing yards against Vanderbilt, going 23-for-36 for two touchdowns in the game … Put TDs passes in the hands of Tyson Morris (11 yards) and O’Grady (12 yards), both in the fourth quarter … Made it consecutive 200-yard games behind a 19-of-38 passing in the next contest against LSU for 200 yards and two TDs, both coming to O’Grady in the fourth quarter on 11 & 32-yard plays … Reached a passing grade of 79.7 from PFF in the season opener, finishing the day with an 81.3 overall offensive mark … Notched a season-best 80.7 grade in passing against Ole Miss … The Arkansas offense wrapped the 2018 campaign with 4,028 yards of total offense and 28 touchdowns, including 2,307 yards and 17 scores coming through the air.

HIGH SCHOOL: An early enrollee who was a consensus four-star prospect by Rivals, ESPN, Scout and 247Sports … Was the No. 6 pro-style quarterback in the nation, No. 3 player in Arkansas and No. 165 in the Rivals250 according to Rivals … 247Sports ranks him the No. 9 pro-style quarterback, No. 3 player in Arkansas and No. 236 overall prospect in the Top247 … Ranked the No. 4 player in Arkansas and No. 16 quarterback in the nation by Scout … ESPN listed him as the No. 7 player in Arkansas and No. 19 pocket passer quarterback in the country … HawgSports.com ranked him at No. 3 in the Natural 21 … Led Charleston to back-to-back perfect seasons and Arkansas Class 3A state championships, earning State Championship MVP as both a junior and senior … Also won a state championship as a freshman linebacker in 2011 … Ended his career with 29 consecutive wins … Finished his varsity career with 12,856 passing yards and 154 touchdown passes … The 12,856 passing yards ranks third in Arkansas all-time and the 154 touchdown passes is the second-most by any player in state history … Became just the eighth player in Arkansas high school history to pass for over 10,000 career yards, joining former Razorback quarterback Brandon Allen on the list … Also ranks among Arkansas’ all-time high school leaders with 897 completions (2nd), 1,370 pass attempts (3rd) and a 66.0 completion percentage (3rd) … Named to the 2015 Parade All-American First Team at quarterback … Earned back-to-back Gatorade Arkansas Football Player of the Year and Wendy’s High School Football Player of the Year honors for Arkansas … Named MaxPreps Mr. Football for the state of Arkansas and earned MaxPreps Small School All-American first team honors … Recognized as the 2014 winner of the Landers Award, given to the state’s best prep football player … Named to the 3A all-state team three consecutive years … Earned Farm Bureau Insurance 3A Offensive Player of the Year and the Arkansas Democrat Gazette’s Outstanding Player of the Year … Finished his senior season completing 294 of 447 passes (65.7 percent), for 4,159 yards and 53 touchdowns while adding 724 rushing yards and 20 rushing touchdowns … Totaled 73 touchdowns as a senior, the fourth-most in a single season in state history … Went 268-of-408 (65.6 percent) passing for 4,241 yards and 52 touchdowns as a junior … Also rushed for 180 yards and six touchdowns in 2013 … Started as a sophomore and completed 328 of 503 passes (65.2 percent) for 4,397 yards and 48 touchdowns and rushed for 316 yards and seven touchdowns … Coached by Greg Kendrick … Also was an all-state basketball and baseball player … Chose Arkansas over offers from Alabama, Auburn, Louisville and others.