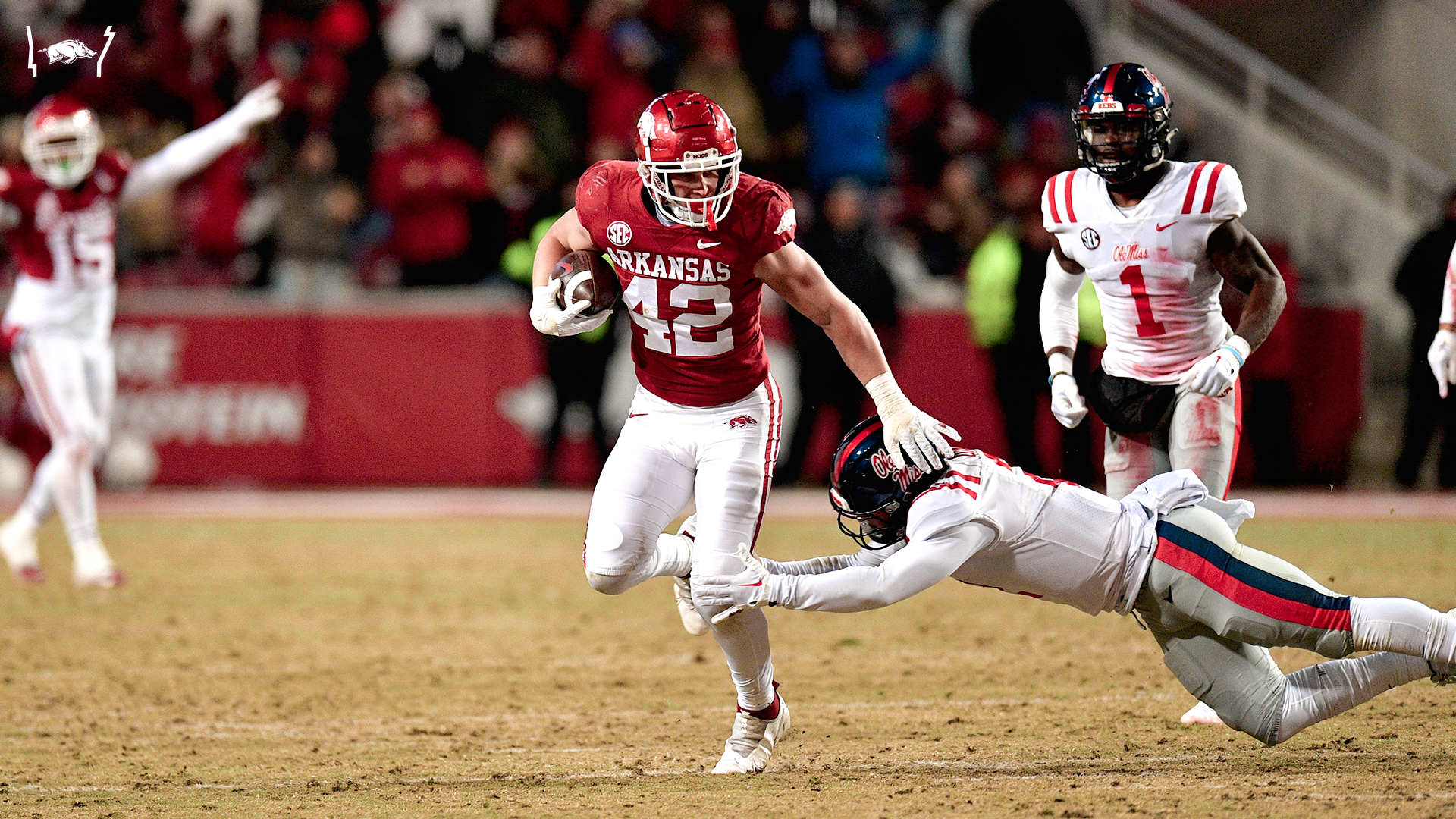 FAYETTEVILLE, Ark. – Arkansas junior linebacker Drew Sanders has been named one of five finalists for the Butkus Award, which is presented to the nation’s best collegiate linebacker.

The Denton, Texas, product has emerged as one of the nation’s top defensive playmakers this season. Sanders delivered his sixth double-digit tackle game of the season after finishing with 10 stops, one interception, one fumble recovery and 0.5 tackle for loss in the Hogs’ 42-27 win over No. 14 Ole Miss on Saturday, which earned him his second SEC Defensive Player of the Week honor this season. Sanders leads Arkansas in total tackles (96), tackles for loss (12.5-45), sacks (8.5-39), forced fumbles (3) and quarterback hurries (6). Additionally, he leads the SEC in sacks, sacks per game (0.77), ties for the lead in forced fumbles and ranks third in total tackles.

Sanders’ 12.5 tackles for loss this season are the most by a Hog defender since LB Alonzo Highsmith totaled 12.5 tackles for loss in 2011. Since 2000, Sanders joins former Buffalo LB Khalil Mack as the only FBS players to total 95 or more tackles with at least 12 tackles for loss, eight sacks, three forced fumbles, a fumble recovery, and an interception in a single season.

Sanders was placed on midseason All-America teams by the Associated Press, CBS Sports, ESPN, Sporting News and The Athletic earlier in October. Most notably, Sanders was named the September’s Butkus Award National Linebacker of the Month after finishing the month tied for the national lead in sacks.

The 2022 Butkus Award winner will be named on or before Dec. 7. The winner will be honored at a televised event on Jan. 21, 2023, at the Agua Caliente Resort Casino and Spa in Rancho Mirage, Calif.

This week, Sanders and the Hogs gear up for their regular season finale on Friday, Nov. 25 in Columbia, Mo., against the Missouri Tigers. Kickoff is slated for 2:30 p.m. on CBS. For ticket information, call the Razorback Ticket Center at 479-575-5151 or click here.