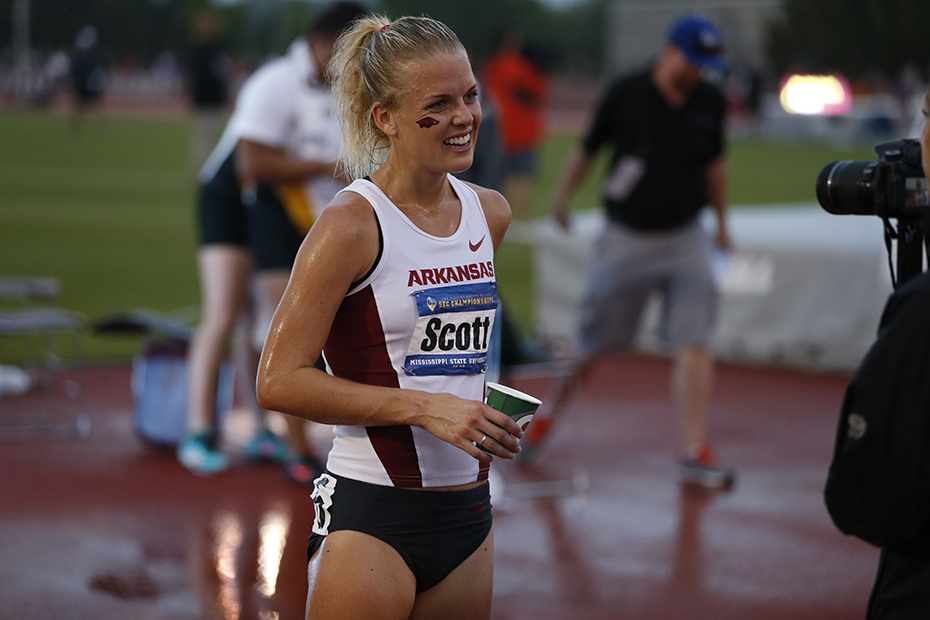 STANFORD, Calif. – The top-ranked Arkansas women’s track and field team lined up against some of the world’s best distance runners Sunday afternoon at the Payton Jordan Invitational in Stanford.

Veteran Razorback Dominique Scott-Efurd had one of the best performances of the day racing to a new program record of 31 minutes, 56.84 seconds. A three-time national champion, Scott-Efurd’s time qualifies the South African runner to represent her country at the 2016 Olympic Games in Rio de Janeiro, Brazil.

She is one of only six collegians to ever run under 32 minutes in the 10K.

Scott-Efurd was the top collegiate finisher in an event almost completely comprised of professional runners. She now leads the NCAA in both the 5K and 10K.

Top Performances
Razorback newcomer Devin Clark moved up the Southeastern Conference performance list to No. 6 in the 1,500 with a new personal best of 4:18.22. Clark is the only freshman ranked inside the conference top-10 in that event and also has an SEC top-10 mark in the 3KSC.

Along with Clark, Therese Haiss also raced to a sub-4:20 performance in the 1,500 crossing the finish line as the fifth-best collegian in section four with 4:19.93.

In the 3KSC, senior Jessica Kamilos dropped 7 seconds from her time running a new season’s best of 9:52.37 to strengthen her hold as the best performer in the event in the SEC.

The Razorbacks will host their final regular season home meet during the Arkansas Twilight on Friday, May 6 at John McDonnell Field.

Tickets are just $5 for adults and youth 17 and under get in free. Visit arkansasrazorbacks.com or call 800-982-HOGS and get your tickets today.