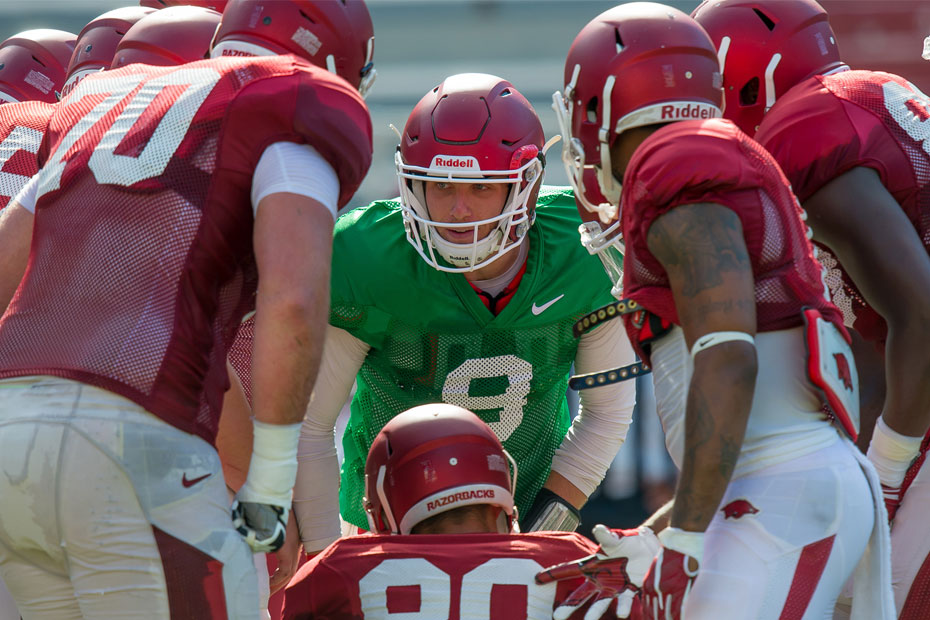 FAYETTEVILLE, Ark. – The Razorbacks had to work in all kinds of weather Saturday afternoon during their second scrimmage of fall camp. Even with the wet conditions, the team was able to close out the third week of preseason work strong before classes begin on Monday.

Head coach Bret Bielema and his staff started the scrimmage inside Donald W. Reynolds Razorback Stadium, but the rain began to fall after the opening stretch periods. Due to no threat of lightning, Bielema kept his team outside to give it a chance to work on potential rainy situations that could occur during the season. The team moved indoors halfway through after working on first and second downs and red zone plays.

Much of the first team offense got plenty of reps throughout the day and most of the key producers wore the green jerseys, which Bielema said was to “keep them fresh.”

After the scrimmage, Bielema also told the media that the starting offensive line is set with Dan Skipper at left tackle, Hjalte Froholdt at left guard, Frank Ragnow at center, Jake Raulerson at right guard and Colton Jackson at right tackle.

First and Second Down
• Quarterback Cole Kelley connected with wide receiver Deon Stewart early in first down work for an 11-yard gain. Kelley took a lot of reps during the first half of practice outside, finding Stewart twice for 10+ yards and De’Vone McClure for 24 yards.

• Quarterback Austin Allen hooked up with Drew Morgan for 20 yards down the sideline, one of multiple catches for Morgan on Saturday.

• Just before going into red zone work, JaMichael Winston shined after getting into the backfield on two-straight plays, tallying what would have been two sacks.

• Right after Winston’s two sacks, the defense capped the down work with a perfectly played pass break up by Byron Keaton and interception by De’Andre Coley.

Red Zone
• Starting at the 21-yard line, the Allen-led offense only needed four plays to find the end zone, capped by a nice pass and catch to tight end Jeremy Sprinkle from four yards out. The big gain on that drive coming from a 13-yard pass from Allen to Morgan.

Move the Ball
• After moving indoors, the Hogs got right to work on getting the ball downfield. It didn’t take long for the first touchdown as wide receiver Jared Cornelius hauled in a nice back shoulder catch from Allen from 30 yards out to end a six-play drive that started on their own 35.

• That catch by Cornelius was his second catch of the drive as he had an 18-yard gain over the middle earlier.

• Kelly took over under center on the last drive of the day and was able to go 55 yards and convert a 4th and 2 with a 26-yard touchdown pass to La’Michael Pettway.

Up Next
The Razorbacks will take Sunday and Monday off as classes for the fall semester will begin. The team will return to the practice field Tuesday afternoon to begin its preparation for its Sept. 3 opener against Louisiana Tech.