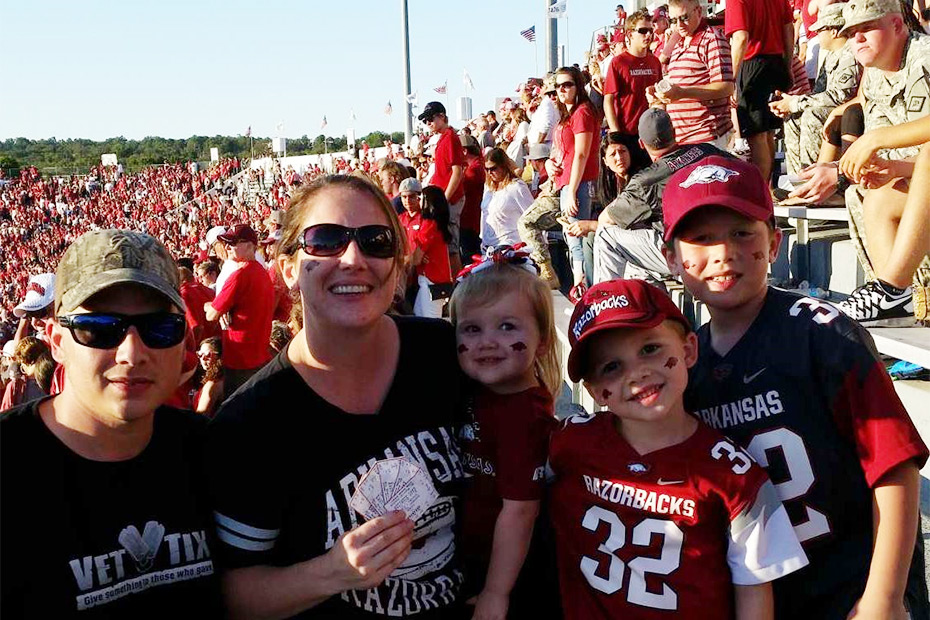 Seats For Soldiers: Hogs Fans Give Back To Those Who've Served

FAYETTEVILLE, Ark. – In times when their country called upon them to serve, Arkansans have always heeded the call of duty. And when it came time to give back to those who’ve sacrificed by serving in the U.S. armed forces, Hogs fans stepped up to the task.

“The passion of Razorback fans is not just for the young men and women who represent the University of Arkansas in competition, but also for those who have served our nation in the armed forces,” Vice Chancellor and Director of Athletics Jeff Long said. “Through the generosity of the Razorback nation, we have been able to provide a special Razorback game day opportunity to soldiers and their families. We are greatly indebted to all of those who protect our freedom. Our hope is that through this program, we can express just a small measure of the gratitude that we have for their service.”

Hogs fans were asked in ticket renewal forms, during ticket transactions made over the phone, and online if they would like to donate $25 to Razorback Athletics’ “Seats For Soldiers” program. Those tickets were then made available to Vet Tix to distribute to their network of more than 200,000 verified veterans and dependents.

Out of the 1,183 tickets Hogs fans donated, 225 were used on the Sept. 5 season home opener against UTEP, and 958 were for the following week’s game against Toledo in Little Rock.

“My wife and I wanted to express our thanks to the University of Arkansas for donating tickets to Vet Tix,” said username Shandy, who attended the Little Rock game, according to an online testimonial on the VetTix.org website. “We have been big Razorback fans our whole lives being Arkansas natives, but neither of us had ever been to a game in person. It made for an incredibly enjoyable day for us.”

Vet Tix, a non-profit organization that supports the military community by providing tickets to various events and activities to currently serving military, veterans, and their families, has given away more than 1.6 million event tickets to verified military personnel and their dependents since 2008.

This is the third year the Razorbacks have worked with Vet Tix.

“These tickets help build morale for soldiers that may be getting ready to deploy and shows returning soldiers that we appreciate the sacrifices they are making in service to the U.S.,” said Vet Tix Chief of Community Relations Brandi Shannon. “It shows that their community supports them and their family during their hardship.”

“One of the things I remember as a boy growing up was the trip from southwest Arkansas to Little Rock with my uncle and father,” said username James, who identified himself as a U.S. Army veteran from 1990-1994 who also attended the Little Rock football game. “That memory has been with me for a long time, and I have always wanted to be able to share that experience with my sons as well. Hearty thanks to the University of Arkansas for donating the tickets and also to VetTix.org for giving my stepson and I a chance to spend some time enjoying something that we both love.”