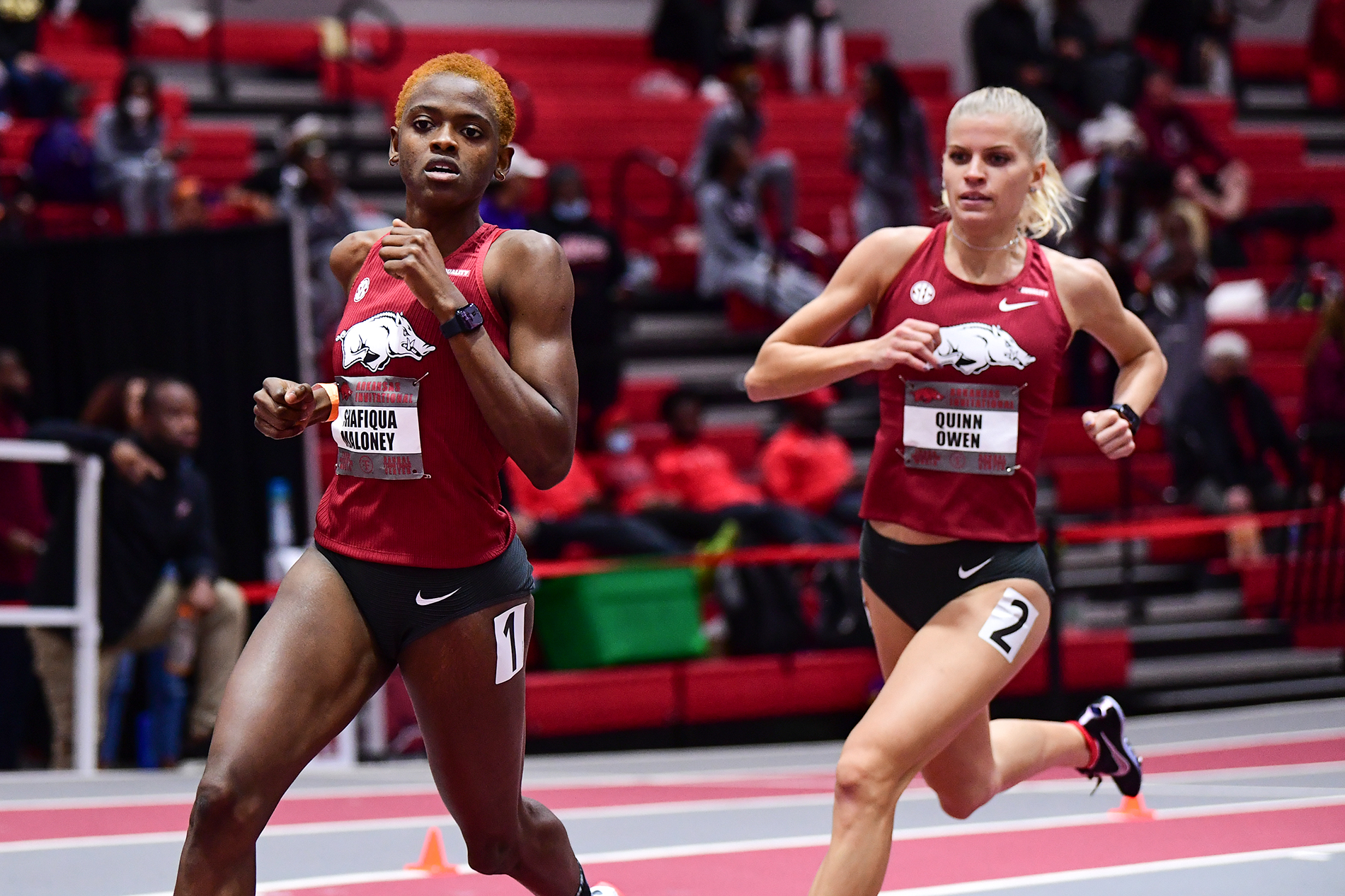 FAYETTEVILLE – Razorback senior Shafiqua Maloney highlighted the Razorback women’s performance with a trio of wins at the Arkansas Invitational held in the Randal Tyson Track Center on Friday. Maloney set a meet record in the 800m, improved her career best in the 400m, and anchored the 4×400 relay to a meet record.

In total, the Razorbacks produced five winning efforts while adding the top collegiate finish in one event along with six runner-up efforts. Arkansas depth was also on display in various events.

“Shafiqua ran a great 4-8 double with a 2:04 after a 52 low,” said Arkansas women’s head coach Lance Harter. “It just shows the fall training really paid off for her and is paying dividends.”

Maloney claimed the 400m in 52.33, moving to No. 8 on the UA all-time list as she bettered her previous indoor best of 52.51. In setting the early collegiate leading mark this indoor season she also currently has the second fastest time in the world behind a 51.76 set by Ireland’s Phil Healy.

“I was just having fun today,” said Maloney. “The main thing was to listen to my coach and do what he says. That’s exactly what I did and those were the results. I was only supposed to rabbit through 600, but he said if I felt good keep going. I felt good, so I kept going.

“Running the 8 and 4 I get to train with both groups. Being able to have my teammates be there with me in the races is a good feeling. We’ve put in a lot of work and we’re on the right track. It’s great when you can have a fun day and get done what needs to get done.”

In winning the relay with a current world leading 3:30.79, Arkansas shaved four full seconds off the previous meet record of 3:34.79 in the 4×400 relay, which included the same foursome in a different order from last year.

“It was a heck of a double by Shafiqua,” noted associate head coach Chris Johnson. “Obviously, we wanted to help a teammate get her to a good early season time. I told her if she felt good, just keep going. Her fourth 200m was better than her third, so that shows she is fit. We still need to work on some things, but the future looks bright for her.”

Nastassja Campbell equaled her indoor career best of 14-3.25 (4.35) in the pole vault, which is tied for 10th on the UA all-time list. She tied with Oklahoma’s Olivia Lueking, but opted to not continue in the jump-off and placed second.

Campbell led a performance that had six Razorbacks placing among the top eighth finishers. Elien Vekemans finished third at 13-5.25 (4.10). Tied for sixth place at 13-5.25 based misses were Kaitlyn Banas and Mackenzie Hawyard. Equal for eighth at 12-9.5 (3.90) were Bailee McCorkle and Grace Ridgeway, who improved her PR for a second time this season.

Julia Paternain registered the first win by the Razorbacks in claiming the 3,000m in 9:44.87.

Baylark won the 60m over a pair of professional hurdlers as her 7.29 nearly claimed the meet record of 7.26 set by Kiara Parker in 2019. Baylark and Parker share the UA school record at 7.15. Finishing behind Baylark was Christian Clemson (7.42) and Sharika Nelson (7.48).

Sydney Billington was runner-up for the second time this season in the high jump, clearing 5-8 to match the winning height by Ja’Sha Sloan of Oklahoma. Billington missed at her career best height of 5-10.

Yoveinny Mota led the 60m hurdle field in the prelims with an 8.29 but had a false start in the final. British hurdler Cindy Sember won the final in 8.19, just missing the meet record of 8.18 set in 2018 by Razorback Payton Chadwick.