Treylon Burks and Jalen Catalon were both tabbed first-team members, Grant Morgan is on the second team with offensive linemen Ricky Stromberg and Ty Clary on the third team while Myron Cunningham was honorable mention at left tackle.

Burks leads the way for the Hogs as a first-team selection after being named a second-team preseason All-American by PFF earlier in the week. The ultra-talented Burks led Arkansas with 51 catches, 820 yards and seven touchdowns in just nine games last season. His 91.1 yards per game was the third-highest mark in the league as he earned second-team All-SEC honors. He was also one of only two FBS receivers, joining Florida’s Kadarius Toney, to log 800+ receiving yards and 70+ rushing yards despite missing a game due to injury.

PFF: "Burks took his play to new heights in 2020 after being solely utilized as a deep threat as a true freshman in 2019. He improved his receiving grade from 70.5 to 88.9 this past season. Burks still made his fair share of deep plays, but he started to produce on the underneath and intermediate route trees, too. "Burks was a hard man to tackle with his size, physicality and speed, averaging 7.6 yards after the catch and breaking nine tackles on 50 receptions in 2020. Those traits have helped him vertically, as well. Over the past two seasons, he has been responsible for 17 receptions of 20-plus yards, the 10th-most among Power Five receivers. And he did that as an underclassman."

PFF: "Catalon is a high-energy, high-effort player in this Arkansas secondary who has the chance to take his play to elite status in 2021 after a fantastic first season in a starting job in 2020. He’s a quick processor and gets going in a hurry. He made eight plays on the ball and eight passing stops last season, both of which were top-10 marks among Power Five safeties."

2020 All-America LB Grant Morgan is a second-team preseason All-SEC selection by PFF. Morgan produced one of the greatest seasons in Arkansas history last season, leading the nation with 12.3 tackles per game and making a team-leading 111 tackles. He became just the 16th Razorback to be named a Walter Camp All-American, earning second-team status from the foundation and AFCA. He also became the first Arkansas player to be a Burlsworth Trophy finalist.

Stromberg was a rock for the Hogs in the middle of the line last season, playing in nine games and starting eight at center. According to PFF, he logged 628 offensive snaps – fourth-most on the team – and totaled a 69.7 season run blocking grade, ranking second among Razorback offensive linemen.

Cunningham’s return for the 2021 season was one of Head Coach Sam Pittman’s biggest wins of the offseason. He logged the most offensive snaps of any Razorback (705) and was one of just two offensive linemen (Brady Latham) to start all 10 games. He allowed only two sacks while posting pass blocking grades of 80+ four times according to PFF.

Arkansas opens the 2021 season with a pair of former Southwest Conference rivals in Rice and Texas. The Owls visit Donald W. Reynolds Razorback Stadium for the season opener on Sept. 4 at 1 p.m. on ESPN+/SECN+. The Horns and Hogs meet in Fayetteville for the first time since 2004 the following week (Sept. 11) in primetime at 6 p.m. on ESPN. Arkansas will also host home games against Georgia Southern (Sept. 18), Auburn (Oct. 16), UAPB (Oct. 23) in Little Rock at War Memorial Stadium, Mississippi State (Nov. 6) and Missouri on the Friday after Thanksgiving (Nov. 26) at 1:30 p.m. on CBS.

Season tickets are now on sale and available by clicking here. 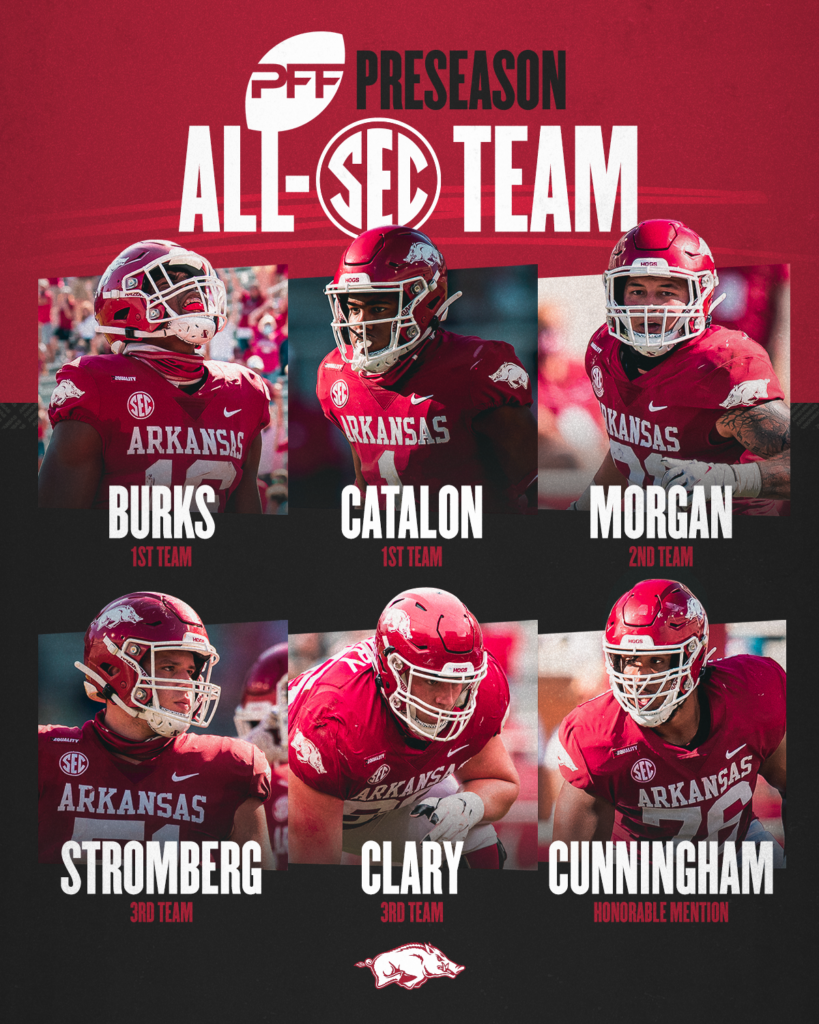