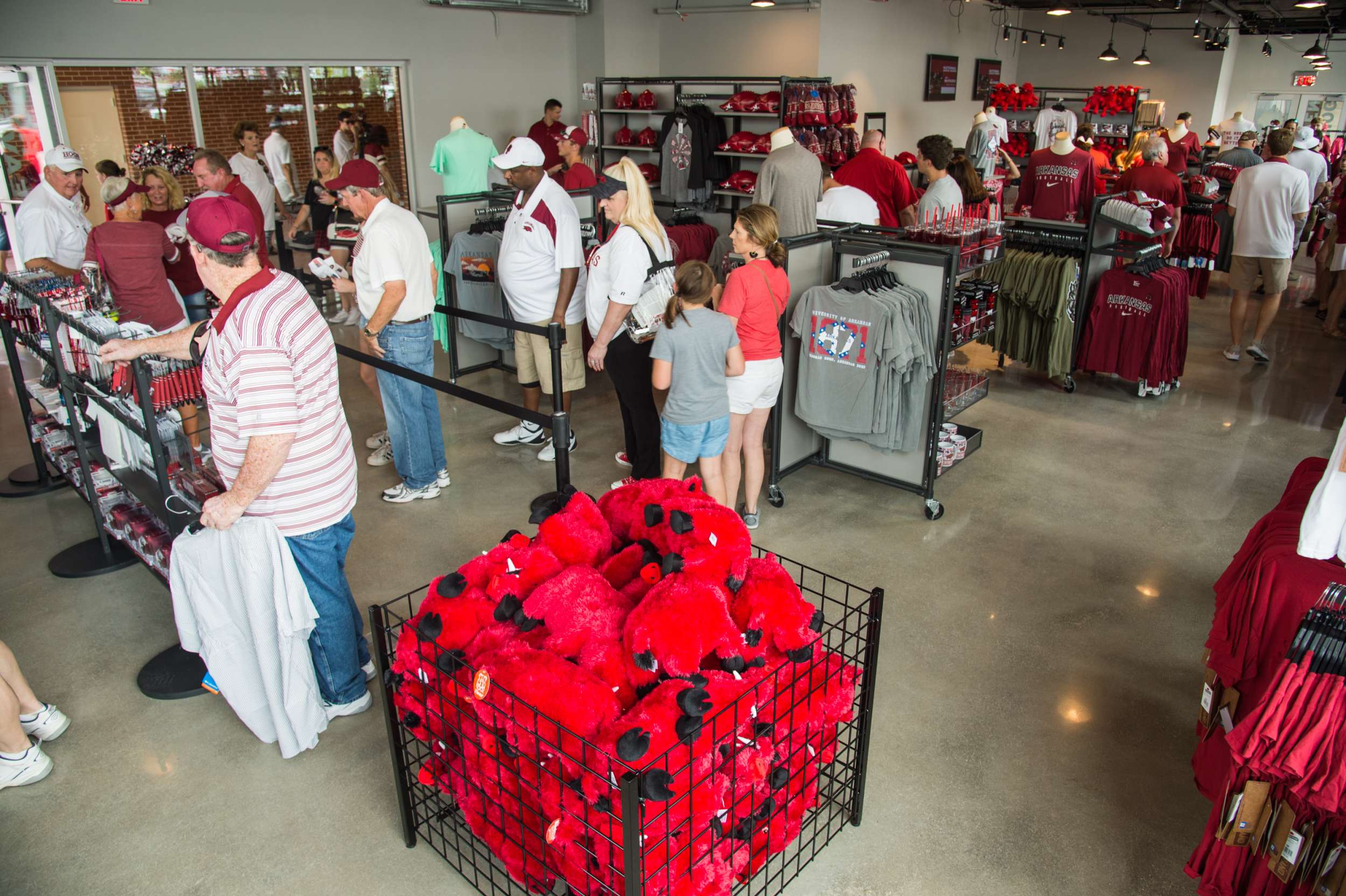 FAYETTEVILLE, Ark. – Providing guests at Donald W. Reynolds Razorback Stadium with a quality game day experience continues to be a focus for Razorback Athletics. Fans attending football games this season will take note of numerous enhancements and improvements, many made based on guest feedback and designed to make gameday more enjoyable.

Perhaps the first thing fans will notice is the significant change to Frank Broyles Field. Natural grass has made its return to Donald W. Reynolds Razorback Stadium. Through a collaboration with J.B. Hunt Transport Services, Inc., the new grass featuring Tahoma 31 was transported from Winstead Turf Farms in Arlington, Tenn. with installation beginning on the morning of August 5. The installation of the new playing surface takes Razorback Stadium to natural grass for the first time since 2009 and to its original playing surface beginning in 1938.

For those cheering on the Razorback from the stands, there is also plenty to take note of for the 2019 season. In an effort to improve sound quality, Razorback Athletics tested all stadium speakers to ensure clarity and on-field speakers will be utilized for pregame to allow the primary projection of pregame music to be toward the field.

Heat can often be a formidable foe for people attending games, especially early in the season. Four complimentary water stations will provide guests with free access to water, some shade and ventilation fans in some of the most climate exposed parts of the stadium. In addition, two new water bottle refill stations have been installed on the north and south ends of the stadium.

To better accommodate young families attending Razorback Football games, multiple additions have been made at Donald W. Reynolds Razorback Stadium. Two new nursing stations have been created to allow mothers a private place to nurse during gameday. Baby changing stations are now available in all restrooms of Donald W. Reynolds Razorback Stadium. In addition, stroller corrals have been created near Gate 1 and between Gates 15 and 16 on the exterior of Donald W. Reynolds Razorback Stadium. Strollers ARE NOT allowed inside the stadium. However, the stroller corrals provide places for families to leave strollers during the game to make traveling to and from the game more convenient. Fans should note that if they plan on riding gameday shuttles, only single strollers that can be folded and stowed will be permitted on the shuttles. Double strollers or strollers that do not fold will not be permitted on gameday shuttles.

For those gameday merchandise needs, fans can visit the new permanent location of Hog Heaven in the north end zone of Donald W. Reynolds Razorback Stadium or any number of multiple kiosks located throughout the stadium, including the south end zone. Hog Heaven has a variety of great products available on gameday and every day, including the Sooiet Boutique and new customizable options. In the customization corner, located in the main Hog Heaven store in the north end zone, fans can select from several base products, then add their own personal touch through a variety of unique patches. Finally, fans can watch their customized item come to life in minutes.

While you are visiting Hog Heaven in the north end zone, be sure to visit the new University of Arkansas Sports Hall of Honor. The all-sports museum celebrates the legendary Razorbacks who have earned the highest honor Razorback Athletics can bestow. The Hall of Honor includes interactive displays that help tell the history of the storied Razorback program. The Hall of Honor can be accessed from the front lobby of the Broyles Center during specific pre-game hours, but is also accessible to all fans once gates open on gameday through doors located on the mezzanine concourse in the north end zone.

Both the Hall of Honor and the north end zone location of Hog Heaven will open at 10 a.m. on gamedays, or in the case of earlier kickoff times, a minimum of two hours prior to kickoff. Access to both locations prior to stadium gates open will be through Gate 12. Fans should note, that approximately three hours prior to kickoff, both locations will close temporarily to allow for the Hog Walk and north end zone premium ticket entry.

Navigating a Razorback Gameday can sometimes be a bit overwhelming. To help make the guest experience easier, Razorback Athletics has taken a number of steps to help better inform and equip fans to make the most out of their trip to Donald W. Reynolds Razorback Stadium. The stadium includes four fan services locations to assist or provide answers and guidance to fans with questions regarding gameday information. In addition, a fan services kiosk will be located in the HogTown Street Festival, located just north of the stadium.

Additional signage has been placed throughout the stadium to direct fans to locations within the stadium as well as provide them information on how to access the game day text hotline. For in-game security or Guest Service concerns, fans may text keyword “HOGS” their Message and their Location to 69050 (e.g. HOGS seat broken section xxx/row x, seat xx). Standard text message rates apply.

When it comes to getting to and from the game, there are plenty of free options for Razorback fans. Once again, free parking and a free shuttle service will be available from Baum-Walker Stadium, beginning four hours before each home game. The shuttles will run throughout the game and return fans following the completion of the game.

Starting this season, a “Gameday Bike Valet” program will make it easier for fans who want to skip the car and bike to Razorbacks football games. The program will offer a secure location for riders to leave their bikes within a convenient walking distance to the stadium. The bike valet will accept both VeoRide and personal bikes at its location on the east side of the Arkansas Union at Union Mall.  The bike valet is sponsored by VeoRide Bikeshare and the University of Arkansans Office for Sustainability.

Fans may also take advantage of a new rideshare program with discounted rates. Sponsors Anheuser Busch and Lyft encourage safe driving by providing a $5 Lyft ride discount to and from each Razorback Football game. The designated Rideshare Drop/Pickup zone is located at the Student Union just east of the stadium.