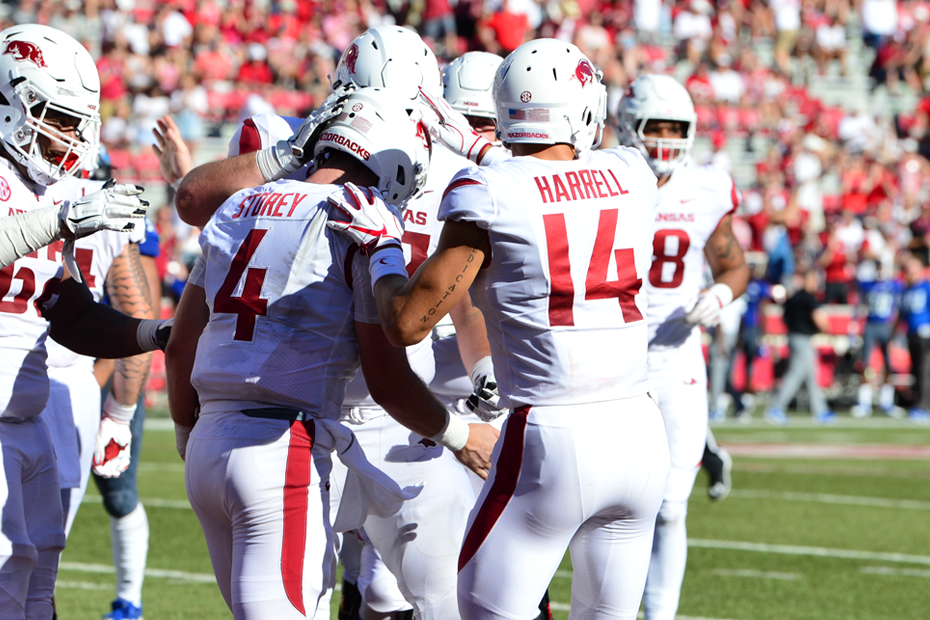 FAYETTEVILLE, Ark. – Junior quarterback Ty Storey had a career day that included four touchdowns, three through the air and one on the ground, as Arkansas (1-0) topped Eastern Illinois (0-1) 55-20 inside Razorback Stadium.

Sophomore Chevin Calloway caused the first takeaway of the season for the Razorbacks, and the first of his career, when he forced and recovered a fumble on Eastern Illinois’ first drive.

The first points of the season came from a 35-yard boot from junior Connor Limpert. Dating back to last season, Limpert is nine for his last 10 field goals. The Allen, Texas native remains perfect from 30-39 yards in his career.

Senior Dre Greenlaw forced a fumble on the Panthers’ wide receiver Aaron Gooch. The fumble was recovered by Calloway, his second of the day. The recovery set up the Razorback offense in prime position at the Eastern Illinois 29 yard line. Greenlaw finished with 10 total tackles including two for a loss.

The first touchdown of the season came from the defensive side of the ball. Armon Watts forced a sack-fumble that was recovered in the end zone by sophomore Briston Guidry. It was Guidry’s second defensive score of his career, and second in three games, after recovering a fumble in the end zone against Mississippi State last season.

Junior Devwah Whaley gave the Razorbacks their first offensive score of the season as the Beaumont, Texas native powered into the end zone from a yard out to give Arkansas a commanding 17-0 lead. Dating back to last season Whaley has recorded a touchdown in seven-consecutive games.

Junior De’Jon Harris posted his first career forced fumble in the middle of the second quarter. Senior Santos Ramirez recovered the ball on Eastern Illinois’ 27-yard line. The fumble gave the Razorback defense five forced fumbles on the day, the most in a game since October 31, 1998, against Auburn.

Junior Ty Storey would connect with sophomore La’Michael Pettway for a 14-yard touchdown to give the Razorbacks a 24-point lead. It would be the first of two Storey-to-Pettway scores and was the first touchdown pass of his career. It was Pettway’s second career receiving touchdown and first since the 2016 season.

Late in the first half, Storey would again find La’Michael Pettway for a long 48-yard touchdown. It was the first long score for the Hogs this season and gave the Razorbacks a 25-point lead with 1:28 left in the half.

Storey would find a wide-open Jordan Jones for a 57-yard score. It’s the second-consecutive game for Jones with a long score, as he recorded a 57-yard touchdown in the season finale against Missouri in 2017. The touchdown gave Storey three touchdown passes in the first half as the Razorbacks took a 38-6 lead. Jones finished as Arkansas’ leading receiver with five catches for 132 yards.

Freshman linebacker Bumper Pool recovered and took it 60-yards to the Eastern Illinois 5-yard line. The fumble was the fifth recovered by the Hog defense. Pool finished with six total tackles on the day.

Two plays later, Ty Storey would scamper two yards for his fourth touchdown of the day, and first on the ground. Storey would finish the game with 261 yards through the air on 12-for-17 passing. The junior recorded three passing touchdowns, and one on the ground.

Limpert added three more points on his second field goal on the day. Limpert has now made 10 of his last 11 field goals.

The Razorbacks would add one more touchdown with 3:48 left in the fourth quarter when Cole Kelley found Austin Cantrell over the middle for a 44-yard score. Kelley would finish the day 9-of-12 for 91 yards and one touchdown. Cantrell caught two passes for 53 yards and a score.